Though Morocco does not prosecute people who change their religion, Christian converts still face social and legal pressure 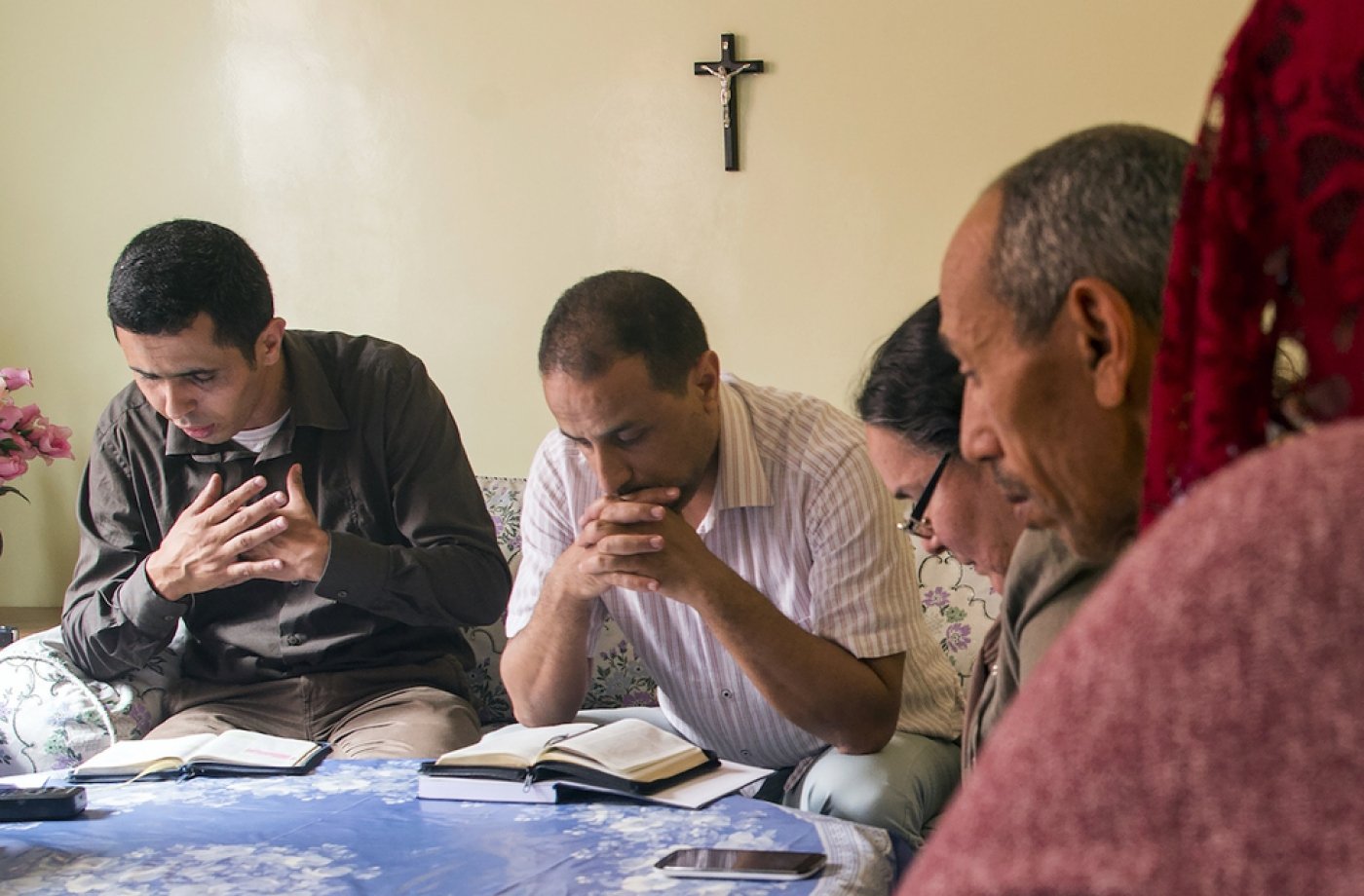 Rachid (L) and Mustapha (2nd-L), Christian converts who did not wish to give their full name, lead prayers at a house in Ait Melloul near Agadir (AFP)
By
AFP

Moroccans who secretly converted to Christianity are demanding the right to practise their faith openly in a country where Islam is the state religion and "apostasy" is condemned.

At an apartment in a working-class part of the southern town of Agadir, Mustapha listened to hymns emanating from a hi-fi under a silver crucifix hung on the wall.

The 46-year-old civil servant, son of an expert on Islamic law from nearby Taroudant, was once an active member of the banned but tolerated Islamist Charity and Justice movement.

"I was tired of the contradictions in Islam," said Mustapha.

"I became interested in Christianity through a long correspondence with a religious centre in Spain in the late 1980s."

He went on to qualify as a Protestant pastor and received a certificate from the United States after taking a correspondence course.

Mustapha kept his faith secret for two decades, but a year-and-a-half ago he published a video online in which he spoke openly about his conversion. The reaction was immediate.

"Family and close friends turned their backs on me, I was shunned at work. My children were bullied at school," he said.

Converts to Christianity form a tiny minority of Moroccans. While no official statistics exist, the American State Department estimates their numbers at between 2,000 and 6,000.

Over the Easter weekend, Mustapha and a dozen fellow converts met for an "afternoon of prayers" in the living room of Rachid, who like Mustapha did not wish to give his full name.

Rachid, who hails from a family of Sufis, the mystical trend in Islam, embraced Christianity in 2004 and eventually became a Protestant pastor.

A father of two, Rachid said he became interested in Christianity when he was a teenager after listening to a programme broadcast by a Paris-based radio station.

He researched Christianity at a cyber-cafe, contacted a specialised website and they sent him a copy of the Bible.

"I read the entire thing, studied the word of God, took courses," he said. "At the age of 24, I was baptised in a Casablanca apartment."

In April, Mustapha, Rachid and other Moroccan converts submitted a request to the official National Council of Human Rights (CNDH) calling for "an end to persecution" against them.

"We demand the right to give our children Christian names, to pray in churches, to be buried in Christian cemeteries and to marry according to our religion," Mustapha said.

Islam is the state faith of Morocco, but the country's 2011 constitution, drafted after it was rocked by Arab Spring-inspired demonstrations, guarantees freedom of religion.

Foreign Christians and the country's tiny Jewish community of about 2,500 people practise their faiths openly.

Moroccan authorities boast of promoting religious tolerance and a "moderate" form of Islam, and the country's penal code does not explicitly prohibit apostasy, the act of rejecting Islam or any of its main tenets.

But in Morocco proselytising is punishable by law and anyone found guilty of "attempting to undermine the faith of a Muslim or convert him to another religion" can be jailed for up to three years.

"The subject is ultra-sensitive because it relates to the history of colonisation and to the idea that Christianity constitutes a danger to the unity of Morocco," a sociologist of religion told AFP.

Rachid said the lines are shifting.

"The arrests have almost stopped, which is a big step," he said. "Harassment has become scarce."

Rachid, who says "I am Moroccan before being Christian," practises his faith openly and lives a normal life in a working-class district of Agadir alongside his Muslim neighbours.

Most Moroccans who have converted to Christianity live in Agadir and the central city of Marrakesh, and the majority have said they are Protestants.

With the exception of local Jews, Moroccans are automatically considered Muslims, and King Mohamed VI holds the official title of Commander of the Faithful.

Mustapha said the 2011 constitution and actions by the king "in favour of tolerance and coexistence" have helped bolster human rights in Morocco.

But "the penal code, political parties and society have not followed suit," he said.