An IS militant holds the group's flag and a weapon on a street in the city of Mosul on 23 June, 2014 (Reuters)
By
MEE and agencies

BAGHDAD - As Iraqi forces prepare to attack Islamic State (IS) in Mosul, residents inside the city and others who have managed to escape expressed relief at the prospect their home could be liberated from the group's harsh rule.

But they also warned that if the assault is successful, the city's Sunni-majority population would refuse to return to what they called the repressive yoke imposed by the Shia-led government in Baghdad in the past.

The Iraqi army and its elite units that will lead the offensive are gradually taking up positions around the city 400 km north of Baghdad.

The offensive is slated for late September, said Hisham al-Hashimi, who works for the government as a consultant on IS affairs and is the author of the book The World of Daesh (IS).

Iraq's second largest city fell to the militants in just a few short days in 2014 and quickly became IS's de facto capital in Iraq. In 2014, the group's leader Abu Bakr al-Baghdadi took to the pulpit of the city's Grand Mosque to declared a new caliphate than spanned regions of Iraq and Syria.

Eight men from Mosul, contacted secretly by phone on the outskirts of the city, said signs of dissent are increasing ahead of the expected assault. They all spoke on condition of not being identified for fear of retribution.

Walls have been daubed with the Arabic letter M, for "muqawama," or resistance, or two parallel stripes, one red and one black, representing the Iraqi flag, said a resident who spoke from one of the rare areas that still gets mobile telephone coverage.

"These are acts of real bravery," he said. "If you're caught, you're dead."

The Iraqi national flag was raised twice in public squares, once in June and again in July, infuriating the militants who tore them down the next morning, residents told Reuters, authenticating videos posted on Facebook pages.

An unknown number of people were arrested after the July incident, among them former army officers, they said.

With a pre-conflict population of two million, Mosul is the largest urban centre under the militants' control. Its fall would mark their effective defeat in Iraq, according to Prime Minister Haider al-Abadi, although it is likely the militants will continue to launch suicide attacks throughout the country even if they are pushed out of Mosul.

With anti-IS ground forces approaching, and US-led anti-IS coalition planes getting closer to the militant's de facto capital, IS leaders have begun to flee the city for Syria with their families, Iraq's Defence Minister Khaled al-Obeidi said on 30 July.

The militants have always kept tight control on communication to preempt hostile propaganda and stop informants from passing on information to the Iraqi forces or the US-led anti-IS military coalition.

They blocked mobile networks in 2014 and banned satellite TV earlier this year, allowing home internet access only through a server they controlled.

As of a month ago IS restricted internet access further to a handful of official wifi centres manned by supervisors who monitor content over users' shoulders.

At checkpoints set up by the IS "amniya," or security committee, people are asked if they have Facebook and must unlock their phones to prove that they do not.

"Thank God I don't even know what Facebook is, but I was jailed for a week and paid a fine because they found dancing music saved on my mobile," said a taxi driver reached by phone.

Younis, a high school teacher of Arabic literature in his 40s, fled Mosul with his family in May. His biggest fear was that his son, just eight years old, was being indoctrinated into the group's violent interpretation of Islam.

"We escaped from Mosul and risked death for my son's sake; I wanted to rescue him from turning into a jihadist," he said, speaking in a flat in Baghdad, holding his boy in his arms.

"How can I stay silent and I'm seeing Daesh brainwashing my son and teaching him how to become a suicide bomber?" he said, using the Arabic acronym for IS.

The niqab is compulsory under IS in Mosul, even on store mannequins

He showed a photocopy of the cover of a fifth grader's textbook featuring a boy with an AK-47 machine gun on his shoulder.

"I know it's risky to keep this paper with me but I decided to hide it and show it to anybody who asks me how life was under Daesh," he added, puffing on a cigarette, which is banned by IS.

He expressed frustration that his wife has continued to wear the full veil, or niqab, after moving to Baghdad. The niqab is compulsory under IS in Mosul, even on store mannequins, and women are forbidden to walk outside without a male guardian.

"Don't cover your face please for God's sake," he pleaded with his wife. "No need to be afraid anymore, you're a human being and not a slave."

Younis said he paid a taxi driver $5,000 to help them flee Mosul via the Kurdish Peshmerga lines east of the city, taking advantage of the confusion that ensued after advances made by the Kurdish and Iraqi forces in May.

The army progressed further in July, capturing the Qayyara airfield 60km south of Mosul, which will serve as the main staging post for the expected offensive.

Once the fighting intensifies, up to one million people could be driven from their homes in northern Iraq, "posing a massive humanitarian problem for the country," the International Committee of the Red Cross said last month.

More than 3.4 million people have already been forced by conflict to leave their homes across Iraq, taking refuge in areas under the control of the government or in the Kurdish region.

The Kurdish Peshmerga fighters have been deployed to the north and east of Mosul with their back to the Kurdish region that hosts a base for US-led coalition troops assisting Iraqi forces. Local Sunni fighters will also join the offensive but the possible participation of Iranian-backed Shia militias is stirring controversy.

Mosul residents and politicians said they dread the participation of these militias, known as Popular Mobilisation Units, or Hashd Shaabi in Arabic.

They cite abuses in Sunni cities retaken from Islamic State, like the looting in Tikrit [some 150km north of Baghdad] last year and reports of torture, revenge killings and kidnappings in Fallujah, a historic militant stronghold near Baghdad that was recaptured in June.

Although Sunnis are predominant in the northern and western provinces under IS control, Shias are believed to make up more than 50 percent of the population, with Kurds accounting for around 20 percent, according to Columbia University.

The Sunnis in Mosul were mostly indifferent to the IS offensive of 2014 and some even supported it in the hope it would end the oppression of the security forces under former Prime Minister Nouri al-Maliki, an ally of Iran.

Maliki has since been succeeded by Abadi, another Shia, who has taken a conciliatory approach toward the Sunnis and softened the alliance with Tehran.

Abadi has yet to decide whether the Shia militias will take part in the offensive.

The former governor of Mosul, Atheel al-Nujaifi, a Sunni, told Reuters the local administration of the city should have more autonomy after the militants are dislodged.

A police force reflective of the city's complex ethnic and religious make-up should be in charge of security, not the army, added Nujaifi, who leads a Sunni militia that plans to take part in the offensive on Mosul alongside the army.

"The sweeping advance of Daesh in Mosul created a new reality," he said.

Younis, the teacher, and the other men who still live in the city said even though IS rule was much worse than government rule under Maliki, the population won't accept a return to the previous situation.

"Berlin after Hitler couldn't possibly be like before and so neither should Mosul be after Daesh," said Younis. "We need a new system to govern Mosul, we cannot suffer more ordeals." 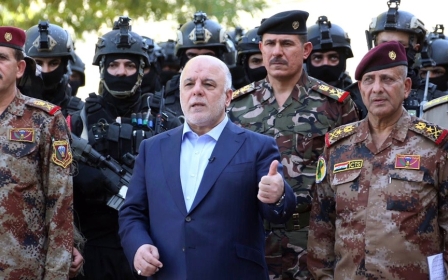