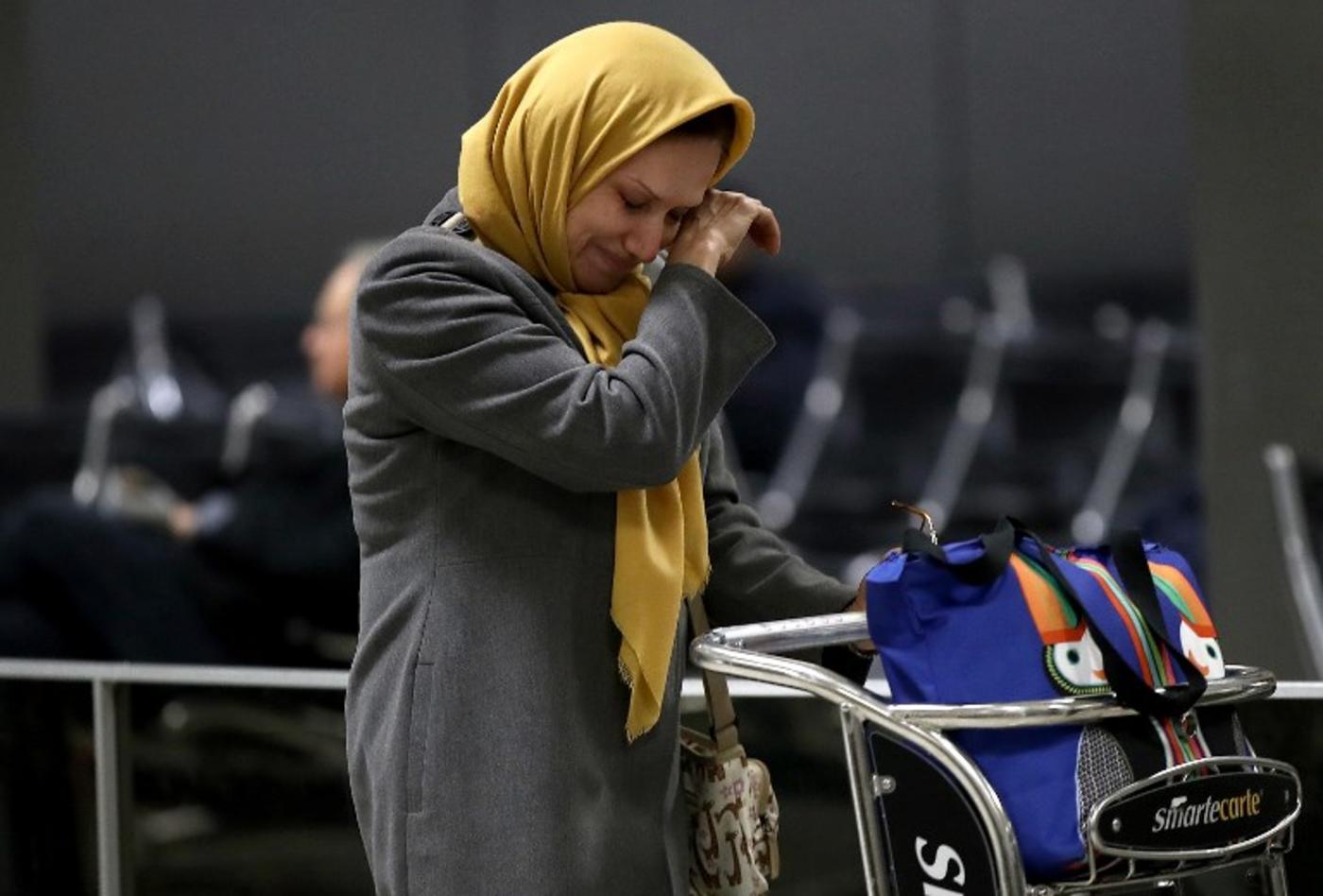 A woman wipes away a tear after greeting a relative at Dulles Airport near Washington, weeks after the travel ban began in 2017 (AFP)
By
Ali Harb
, Dania Akkad

WASHINGTON, DC - Families split; travellers stranded; students unable to attend their universities; people being forced to be away from their loved ones.

Two years after President Donald Trump signed an executive order severely restricting travel from several Muslim-majority countries, the effects of the executive order that came to be known as the Muslim ban, are still happening.

"We've seen families torn apart, individuals not being able to visit loved ones, weddings that were missed, healthcare they haven't been able to receive, students not being able to come to school - there is a real life daily impact that it has, and that's ongoing," Abed Ayoub, the legal director of the American-Arab Anti-Discrimination Committee (ADC), said.

After Trump signed his ban on 27 January 2017, demonstrators flooded airports, 1,000 State Department officials lodged a rare dissent cable, and lawyers filed a rush of lawsuits all in protest against the executive order, which put a 90-day block on citizens from Iran, Iraq, Syria, Yemen, Sudan, Libya and Somalia.

The protests and early court decisions suspending the ban restored hope of a united front against the executive order and underlying bigotry behind it.

Last year, however, the Supreme Court upheld the ban after a lengthy legal battle, ruling in favour of executive power to control immigration, although Trump had professed to his discriminatory intent as a candidate in late 2015, calling for a "total and complete shutdown of Muslims" coming to the US.

Now advocates say they are turning to politicians and presidential candidates to undo the ban.

The order left the lives of people like Syrian doctor Khaled Almilaji, who was waiting to get a visa to continue his masters programme at Brown University and return to his wife who was pregnant with their first child, in limbo.

"You can go to the website – you see your number and there is 'pending'. This pending can take years," he told MEE at the time, stuck in Turkey and continuing his studies remotely while his wife's due date grew closer.

It also threw the country's airports into an instant tailspin, as protesters and lawyers, like Sharifa Abbasi who works for the Virginia-based HMA law firm, gathered to help new arrivals, and untangle a knot of bureaucracy, so freshly spun, no one knew exactly what was going on.

I didn't think it was going to go on for this long, that is even stood a chance

"There were lawyers on the phone with the local elected official's offices, people trying to reach Customs and Border Protection and airlines, people writing different memos, teams doing legal research, conference calls going on every day," said Abbasi, who was volunteering at Dulles Airport.

"It was beautiful because everybody just wanted to come together and offer their support."

As the pack of at least 50 lawyers, fed by other volunteers and surrounded by chanting demonstrators and journalists, continued to advise people, Abbasi said she felt certain that the order would be "blown out by the courts".

"I didn't think it was going to go on for this long, that it even stood a chance," she said. "But unfortunately, given the political climate we are in now, anything can fly."

In fact, the ban had gone through several incarnations before making its way to the Supreme Court last June.

It originally applied to permanent residents, before the Department of Homeland Security issued a directive exempting Green Card holders from the executive order, following some 24 hours of mass confusion at airports.

In March 2017, Trump signed what would become known as the "second Muslim ban". The new decree excluded Iraq from the list. Baghdad had agreed to start accepting deportees from the US in exchange for the move.

The deal allowed the administration to round up dozens of Iraqi Christians who had outstanding deportation orders, even as they argued that sending them back to Iraq could amount to a "death sentence".

In yet another amendment to the ban in September 2017, the White House removed Sudan from the list and added travel restrictions on the citizens of Chad, North Korea and Venezuela.

Robert McCaw, director of the government affairs department at Council on American-Islamic Relations (CAIR), said each version of the ban aimed to "cover up the discrimination, bigotry and unlawfulness" of the previous one.

"It's CAIR's position that the Muslim ban continues, not only to be discriminatory but is unconstitutional," McCaw said.

The Supreme Court's ruling to uphold the ban was a "travesty of justice", McCaw said, citing other historical missteps by the high court, including the Korematsu case that allowed the internment of Japanese-Americans during World War II.

However, he noted that the Supreme Court's decision is not subject for appeal.

"So now it is up to Congress to use its lawful authority to de-fund or repeal this Muslim ban executive order," McCaw continued.

Late in 2017, Congresswoman Judy Chu and Senator Chris Murphy introduced a bill that would "prohibit the use of any funds or fees to implement" the order.

Another "legislative fix", according to McCaw, would be to reform the Immigration and Nationality Act, on which Trump based his executive order.

McCaw acknowledged that such efforts have minimal chances of passing through Congress, as Trump's Republican Party is still in control of the US Senate. A legislative push, however, is still important, he said.

"It is to communicate to the American public that this order can be overturned by Congress, if there is enough votes," he said.

If Trump loses his re-election bid in 2020, his successor could overturn the ban by executive order.

A handful of Democratic politicians and activists have announced their candidacy for the upcoming presidential elections; McCaw said he is still waiting to see who will be the first candidate who will pledge to repeal the ban.

The ban has had a chilling effect on the number of people from the targeted countries coming into the US.

US State Department data shows that in the fiscal year 2018 only 819 Yemenis were granted "immediate relative visas" to join their families in the US, a stark drop from the 8,447 in 2016, President Barack Obama's last year in office.

The fiscal year ends on 30 September, meaning the ban was fully in effect for three months in the last reporting cycle. 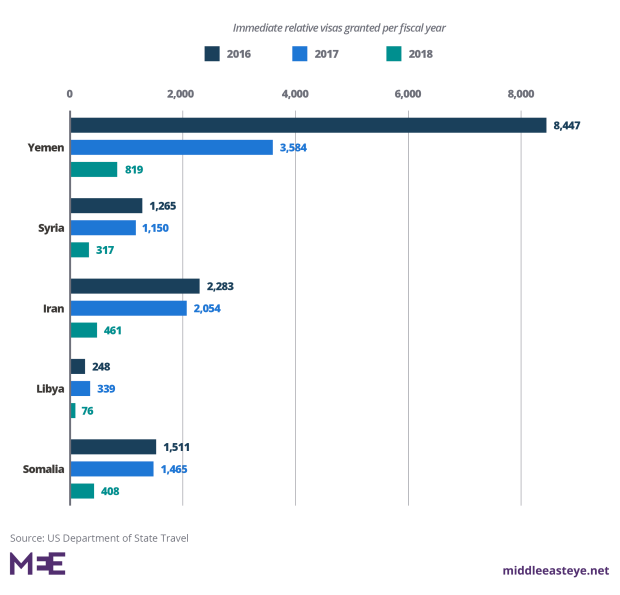 Beyond the direct impact of the ban on potential travellers and family members who may await them here, advocates say the executive order has created an atmosphere of fear that has contributed to the rise of Islamophobia.

"The Muslim ban itself - being discriminatory - marginalises American Muslims and paints them as being a threat to their fellow citizens and neighbours," McCaw said.

"Since President Trump was elected and he issued the Muslim ban executive order, there has been a stark increase in hate crimes and acts of discrimination targeting American Muslims, and vandalism targeting their houses of worship and community centres."

Ayoub echoed McCaw's statement, adding that the ban had a "psychological impact" on Arab, Muslim and immigrant communities in the US.

According to Ayoub, that anxiety was not limited to people from countries listed in the executive order, as people from all communities, including US citizens, started questioning if they would be targeted next.

And their concerns are warranted: Abbasi said she has noticed that the processing time for visas for people from countries with large Muslim populations not on the list – like Tunisia, Afghanistan and Pakistan – have slowed down.

"If you are already outside the country, there are a lot of people that are hopeless," she said. "Imagine all of the talent in these past two years that really could have done something for the country."

'Put each other together'

One of those people was Khaled Almilaji, the Syrian doctor who was stranded in Turkey when the ban came down, hoping to return to his masters programme and to his pregnant wife, Jihan, who is also a doctor.

Almilaji, 37, was working for a pharmaceutical company and finishing up a medical residency when the war started. In September 2011, he was imprisoned for six months in Damascus. He was tortured for two weeks, including by electrocution, and one of his fingers and a rib was broken.

We were lucky that we were still able to get degrees, look for medical training jobs and, at the same time, continue doing this work

Yet prison authorities relied on him to treat other prisoners which he did blindfolded so he couldn't identify anyone later on.

After he was released from prison, he spent the next five years making a major impact on healthcare services for Syrians, including his role on a task force that vaccinated 1.4 million Syrian children against polio and stopped the virus from spreading as it had in Iraq.

Two years after the ban altered their lives, Almilaji's now 17-month-old daughter, Daria, Jihan and he are now settled in Toronto, where Khaled and Jihan were reunited in June 2017.

He is nearly done with a masters in health informatics at the University of Toronto and said he has already used what he has been learning to improve health services in northern Syria.

"I'm finishing my masters in April. It's amazing, right?" he said on Saturday. "I was lucky that I didn't waste more time in this."

Jihan, who is preparing for exams to continue her medical studies, has been able to travel to visit her family in Germany. Meanwhile, Khaled has returned frequently to Turkey to work on initiatives including an underground hospital for women and children, and projects providing care for Syrians in Idlib, Aleppo and Hama.

"We were lucky that we were still able to get degrees, look for medical training jobs and, at the same time, continue doing this work. Not a lot of people had the same chance," he said.

One day, he said, he hopes history books will detangle the chaotic political moment, and provide lessons for the world.

"It's a mess, but it's needed because it's not a matter of the results of one election or another, it's a matter of our collective behaviour. Our communities are divided, but these things showed that division," he said.

"This is good because as a doctor you cannot fix something unless you diagnose it. It was there and now it is on the surface. We have to put each other together.” 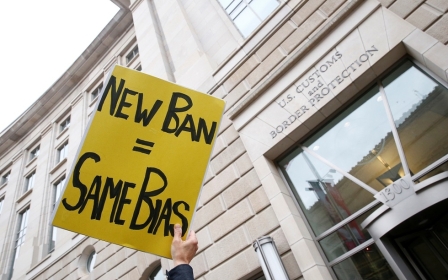