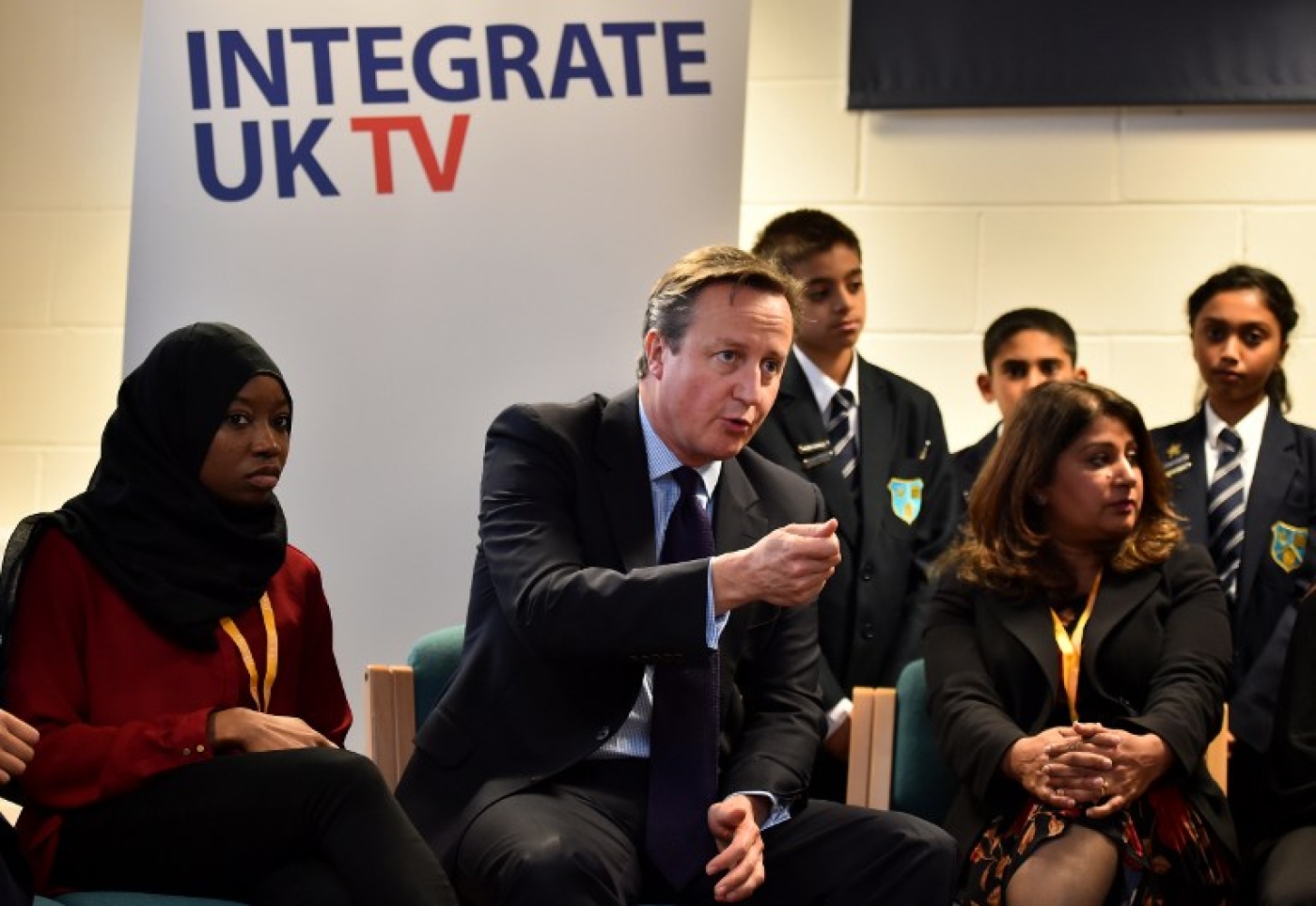 David Cameron talks to schoolchildren in Luton in October 2015. The government faces calls for a review of its counter-extremism strategy in schools (AFP)
By
Simon Hooper

The UK government's Prevent counter-extremism strategy is stifling freedom of expression and "choking off" conversations about terrorism and related issues between teachers and students and some Muslim parents and their children, the country's terrorism legislation watchdog has warned.

Giving evidence to parliament's human rights committee on Wednesday, David Anderson said there were “strong concerns” about Prevent within Muslim communities and reiterated his call for an independent review of the strategy.

He also said that government proposals to ban groups and limit the activities of individuals deemed extremist went beyond any measures considered to tackle fears about Communism during the Cold War.

“When you are dealing with an area where everything is first of all happening in secret and secondly there is a real potential for inhibiting people's human rights there is a very good argument for independent review and I would apply that to the Prevent strategy as a whole,” said Anderson, the Independent Reviewer of Terrorism Legislation.

Anderson also called for additional scrutiny of the extension last year of Prevent into schools and the introduction of a statutory duty for teachers to have “due regard to the need to prevent people from being drawn into terrorism”.

He said that some Muslim parents were fearful of having conversations about terrorism with their children because of concerns that their families could be referred to Prevent by “half-trained” teachers.

“There are Muslim parents who don't like talking about these things in the home because if a subject comes up and the child goes into school the next day and gives a colourful or inaccurate account and some half-trained teacher misinterprets that and thinks 'I'd better be safe and make a Prevent referral', the family could be in trouble,” he said.

He also said that teachers felt vulnerable, citing the case of a teacher in northern England who said she was referred to Prevent and suspended after telling a colleague that she was going to a fundraising dinner for Syria.

“A fellow teacher, perhaps one who didn't like her very much complained about her and said she'd indicated an intention to go to Syria,” he said.

“The teacher told me in fact she had said she was going to attend a fundraising dinner for Syria. She was the only Muslim teacher in a well-to-do white school in an area south of Manchester.”

Other teachers had complained that the Prevent duty had inhibited classroom discussions about issues of terrorism and extremism, Anderson said.

One teacher had told him how she would use discussion about the Islamic State (IS) group to encourage a debate about the use of violence, about Martin Luther King and Mahatma Gandhi and peaceful political activism, and whether IS was the same as the IRA.

“The toxic views would come out and they would hopefully either be blunted or neutralised, or [the students] at least would be given something to think about,” Anderson said. “She said if that happens now you choke off the discussion because teachers are watching their backs and don’t want to be reported.”

Anderson said that Prevent suffered from a transparency problem and had become a “lightning rod for all sorts of grievances” because Muslim communities had not been properly consulted or involved as the strategy had evolved under the current Conservative government.

Prevent was originally introduced by Tony Blair's Labour government following the 2005 London bombings and has long lacked legitimacy in Muslim communities where critics argue it has been implemented in a discriminatory fashion and amounts to a form of surveillance.

The current government has focused increasingly on tackling non-violent extremism, which British Prime Minister David Cameron said in a speech last year was a “gateway” to violence, and is expected to press for laws that would place restrictions on groups and individuals identified as extremist in a forthcoming extremism bill.

But Anderson said that defining extremism was “practically impossible” and that attempts to impose restrictions risked doing more harm than good. The UK had not made it illegal to be a Communist during the Cold War, but the current proposals were “not too far away from that”.

He said there were also concerns that Prevent could infringe on European human rights laws guaranteeing freedom of religious expression and cited the case of a Muslim boy who wanted a place to pray at his secondary school.

“There was a faith room in school but the godless Christians who made up most of the school's population were not very interested in using it. When asked if they could use it for Muslim prayers a panic ensued and various contradictory answers were given and eventually the room was locked as the most effective answer.”

Anderson's predecessor, Alex Carlile, also giving evidence, said he had concerns about potential rights issues that had arisen as a result of Prevent and attempts to outlaw extremism, but said he believed the government's proposals would be “butchered” in the House of Lords.

“I am very concerned about making unlawful that which we have always taken to be lawful,” said Carlile.

Anderson said that an independent review of Prevent and greater transparency would address many of the rumours swirling around the policy which he said he believed were mostly a product of “sloppy journalism”, citing a widely reported BBC story about a schoolboy allegedly reported to Prevent for writing in his homework that he lived in a “terrorist house”.

He also called on the government to publish Prevent training material in the public domain, referring to the recent leak of materials by the civil liberties campaigning group CAGE.

“The best answer is sunlight and engagement in good faith,” he said. “Some of the training materials were leaked and I don't think the heavens fell down. Why doesn't the government take the initiative to claim credit for being transparent and do it itself?”

Despite calling for the strategy to be scrutinised, both Anderson and Carlile said that some good work was being done under Prevent.

Carlile said Prevent was being well-managed in some areas, but suffered from an overall lack of resources.

"I could tell you anecdotes of successful Channel interventions that would warm your heart," he said, referring to the counter-radicalisation programme within Prevent targeted at young people deemed vulnerable to extremism.

"I dont know why the government doesn't warm people's hearts in the same way and engage those communities."

In a speech last year, Cameron said: "In some madrassas, we've got children being taught that they shouldn't mix with people of other religions; being beaten; swallowing conspiracy theories about Jewish people.

But Anderson said: “My only advice to the government is tread very carefully in this area. If you have compelling evidence then perhaps it needs to be done but at the end of the day these are volunteers passing on their religion in a disciplined and structured way to young people who seem only too happy to learn.”

“I have no doubt that particularly if it is done by a secular organisation like OFSTED [the schools inspection body] that it is going to risk creating considerable ill feeling.” 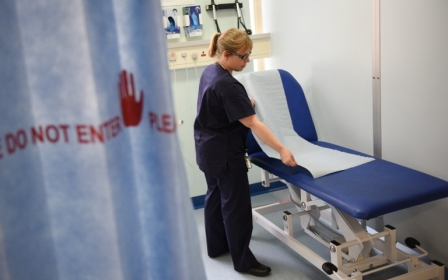 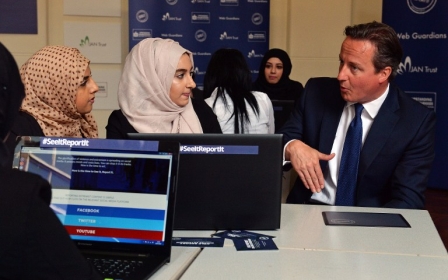 Prevent
Boy, 8, reported by UK school for saying he wanted to 'fight terrorists' 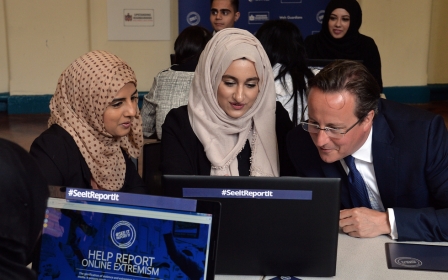