Netanyahu thanks Trump for plan to increase US sanctions against Iran Israeli Prime Minister Benjamin Netanyahu thanked Donald Trump for his plan to increase sanctions against Iran, as tensions between Washington and Tehran show no sign of abating.

The Israeli premier tweeted on Thursday that he had discussed "regional developments and security issues" with the US president.

"Foremost among them was Iran. I thanked President Trump for his intention to increase sanctions against Iran," Netanyahu wrote.

A spokesman for the White House also confirmed on Thursday that Trump spoke to Netanyahu by phone on 10 July, the same day the US president announced his intention to "substantially increase" sanctions on Iran.

I spoke with US President Donald Trump. We discussed regional developments and security issues. Foremost among them was Iran. I thanked President Trump for his intention to increase sanctions against Iran.

Since coming into office, the Trump administration has pursued a "maximum pressure campaign" against the Iranian government, withdrawing from a multilateral nuclear accord in May 2018 and reimposing a series of harsh economic sanctions on Iran's key industries.

Over the past few weeks, tensions between Washington and Tehran have spiked, with top US officials accusing Iran of seeking to attack American forces and interests in the Middle East.

The US has also blamed Iran for a series of attacks on tankers and other vessels in the Gulf - charges that Iranian leaders have repeatedly denied. 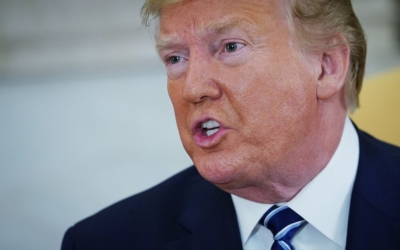 Still, the Trump administration's hardline stance against Iran fits into its wider regional policies - and its unwavering support for Israel, in particular.

Israeli leaders, as well as their supporters in the US, have long pushed for the international community to isolate the Iranian government.

Netanyahu himself lambasted former US President Barack Obama for negotiating with Iran over its nuclear ambitions, a process that resulted in the 2015 nuclear agreement.

Under that deal, Iran had agreed to curb its nuclear programme in exchange for a lifting of international sanctions.

'We are not done,' Pompeo vows

While Trump's decision to pull out of the nuclear accord drew the ire of European countries, it was enthusiastically welcomed by Israel.

In fact, the convergence of anti-Iran and pro-Israel views in the US was on full display earlier this week in Washington, where Christian-Zionist leaders gathered for the Christians United for Israel (CUFI) conference on 8-9 July.

In a speech at the summit, US Vice President Mike Pence listed some of Trump's most recent pro-Israel policy decisions.

'Thank God we have a leader in President Trump, an immovable friend of Israel'

The US president declared Jerusalem as the capital of Israel, recognised Israel's claims to the Syrian Golan Heights, shut down the Palestine Liberation Organization's office in Washington and cut funding to the UN agency for Palestinian refugees (UNRWA), Pence said.

But he also zeroed in on another key example of his boss's pro-Israel pedigree: the administration's "maximum pressure campaign" against Iran.

"We will continue to oppose Iran's malign influence. We will continue to bring pressure on their economy, and under President Donald Trump, America will never allow Iran to obtain a nuclear weapon," Pence said, to a round of applause.

That was echoed by US Secretary of State Mike Pompeo, who said at the CUFI conference that the Trump administration's hardline stance against the Iranian government was evidence of its support for Israel.

"Thank God we have a leader in President Trump, an immovable friend of Israel," Pompeo said at the conference.