Three Israelis have been killed, two of their Palestinian attackers shot dead and a Palestinian protester killed 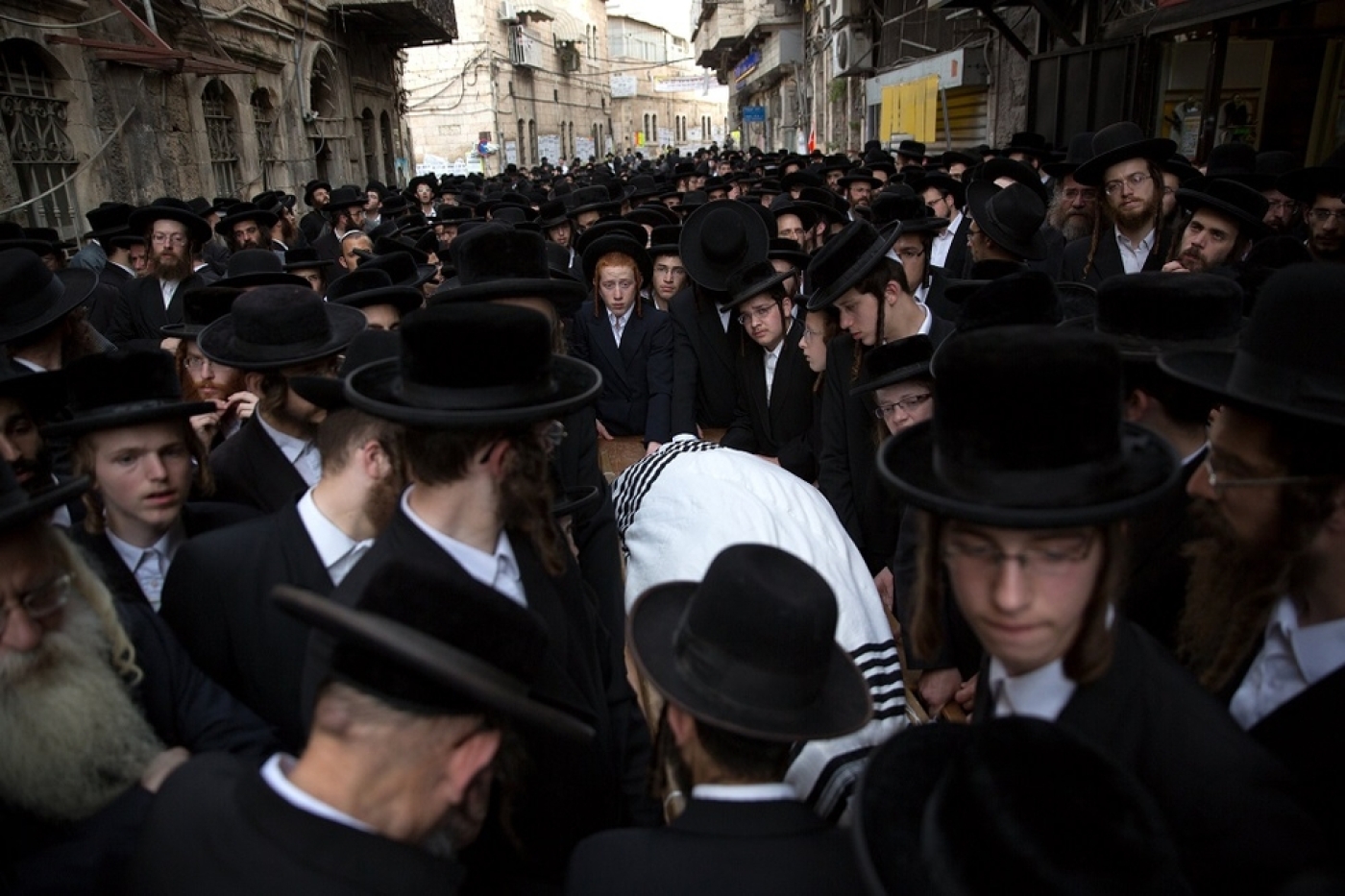 Israeli Prime Minister Benjamin Netanyahu on Tuesday pledged a widespread security crackdown as violence in Israel and the occupied Palestinian territories escalated again in one of the worst days seen since the crisis began last week.

In a speech to the Israeli Knesset, Netanyahu said that he would use "all means" available to end what he says is a wave of Palestinian violence, leading to rife speculation that Israel is planning to seal off parts of East Jerusalem.

“Today we decide on a series of bold steps to further our war against incitement and terrorism," Netanyahu said. "They will be applied in the field as quickly as possible."

"Not only will we take away rights, but they will pay the full price … whoever raises a hand to hurt us - his hand will be cut off,” he added.

According to Channel 2 news, a slew of new security measures will now be implemented in the coming days, with the Israeli army being rolled out across Israel and occupied East Jerusalem.

Sources in East Jerusalem said that there was a heavy police presence in much of the city, with soldiers also highly visible throughout the day. The streets continue to be empty with many shops closed and people reluctant to leave their homes. Young Palestinian men were regularly being stopped and searched

According to Shin Bet statistics, 23 attacks that have occurred since 2 October. Some 80 percent of the attacks have been carried out by Palestinians from East Jerusalem who have special Israeli-issued ID cards.

“Ministers from the right are also demanding more aggressive steps, such as surrounding East Jerusalem neighbourhoods and imposing a lockdown,” Amos Harel, the defence correspondent for the Israel daily Haaretz wrote.

“Therefore, it is likely that the cabinet will decide on measures focusing on East Jerusalem.”

At least 20 Israelis have also been injured, as well as 40 Palestinians during protests in Gaza and 329 in the West Bank, the Red Cross said. So far this month, more than 1,000 people have been injured.

The tensions have spread into parts of Israel, where Palestinian citizens of Israel, who make up about a fifth of the country’s population, took to the streets in the northern Israeli city of Sakhnin.

Estimates vary widely, with Israeli media saying some 20,000 people turned out for a protest march, althought organisers say the number was closer to 50,000. Tuesday's peaceful march is believed to have been among the largest demonstrations ever held by Palestinians in Israel. It occurred hours after a large-scale general strike was staged in some Palestinian-majority towns and villages. Streets were left almost totally deserted with shops and offices closed.

"The demonstration today is proof that the Palestinian people still stick to their principles and won't give up their rights," Tarabeh said.

Hugh Lovatt, programme coordinator at the European Council of Foreign Relations, told MEE that there were two distinct “game changers” on Tuesday.

The first was the shooting this morning in which two alleged Palestinian attackers drove their car into a bus in Jerusalem and began shooting and stabbing passengers. Jerusalem resident Haim Haviv, 78, has been named as one of the deceased, while the name of the second victim has not been released.

“This was an escalation that Netanyahu could not ignore. He has been trying to be the responsible adult and to avoid a further escalation but pressure [on him] has been growing,” Lovatt said.

“It’s not just from the far-right, but also from [opposition leader Isaac] Herzog who is trying to out-manoeuvre Netanyahu on the right, and criticism is also coming from within his own coalition. It has been doing great damage to his reputation as 'Mr Security' – so today’s [Tuesday's] speech was very much a response to this.”

The second “game changer” was the mass protest in northern Israel, Lovatt explained.

“The rhetoric coming out in the media and elsewhere is extremely worrying, and there have been calls for the revenge lynching of Palestinians,” Lovatt added.

He said he expected Israeli army presence to now be beefed up across the West Bank and possibly in Palestinian-majority towns inside Israel. However, he said that a lockdown of East Jerusalem would be highly problematic and difficult to carry out, especially as the government has been actively trying to increase the presence of Jewish residents throughout East Jerusalem.

Solidarity in face of fear

But Nadia Hijab, executive director of al-Shabaka, a think tank that focuses on Palestinian policy, said that she feared further crackdowns on Palestinian majority neighbourhoods.

“What is the most terrifying is the threats to demolish homes of anyone suspected of involvement as well as their families, and to revoke their permits,” she said. “Israel has long hoped to create a 70-percent [Jewish] and 30-percent [Palestinian] population split in East Jerusalem. They have not achieved this and I fear this is an attempt to expedite that process.”

“It is a terrifying time to be a Palestinian with so many people taking matters into their own hands … but what the last two weeks have shown us is that no matter how hard Israel has tried to fragment the Palestinian people the demonstrations among the Palestinian citizens of Israel and in Gaza in solidarity with Jerusalemites and West Bank Palestinians are evidence that Palestinians retain their sense of belonging to one nation as strongly as ever,” she added. 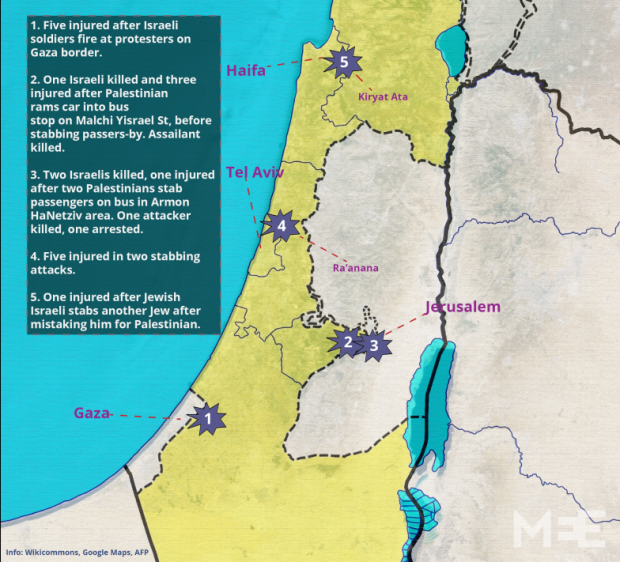 As in recent days, fresh protests rocked the West Bank and Gaza once again on Tuesday. A Palestinian demonstrator, Moatez Zuwahara, was shot dead near Bethlehem by Israeli forces. His funeral has already taken place, but local leaders have called for a general strike to be held on Wednesday in his honour.

More than 300 people have also been hurt across the West Bank, largely from exposure to tear gas, the Red Cross said. Reports indicate that the Israeli army is expected to further step up its presence in the coming days, although thus far Netanyahu, along with the Shin Beit, has defied calls to lock down the West Bank.

“A true leader must show responsibility. Stop the incitement disseminated from the [Palestinian] Authority," Netanyahu said. "You must fight the extremists who make the innocent pay a heavy price. If an escalation will arise as a result of the incitement you will carry the responsibility. You do what you must do, and we'll do what we must do."

Clashes also happened near the Erez crossing between Israel and Gaza. Some 40 people were reportedly injured after Israeli troops fired tear gas and shot rubber bullets into the crowd.

Protests in Gaza turned bloody on Friday and Saturday when nine protestors were shot dead by Israeli border troops and many more injured. Since then, however, Channel Two has reported that the Israeli army has recalled its troops on the Gaza border and replaced them with fresh units with orders to not fire live ammunition.

Earlier on Saturday, Hamas spokesman Sami Abu Zuhri condemned the international community for "remain(ing) silent about Israeli war crimes". He accused Israel of committing war crimes against the Palestinian people "through the execution of young Palestinian men and women at the scene of action," noting in particular the shooting of Palestinians following alleged stabbing attacks, according to the Palestinian news agency Maan.

On Tuesday, US Secretary of State John Kerry said that "the United States condemns in the strongest terms possible the terrorist attacks against Israeli civilians."

"Naturally, we mourn the loss of any life, no matter who it is, but this violence and any incitement to violence has got to stop," he warned.