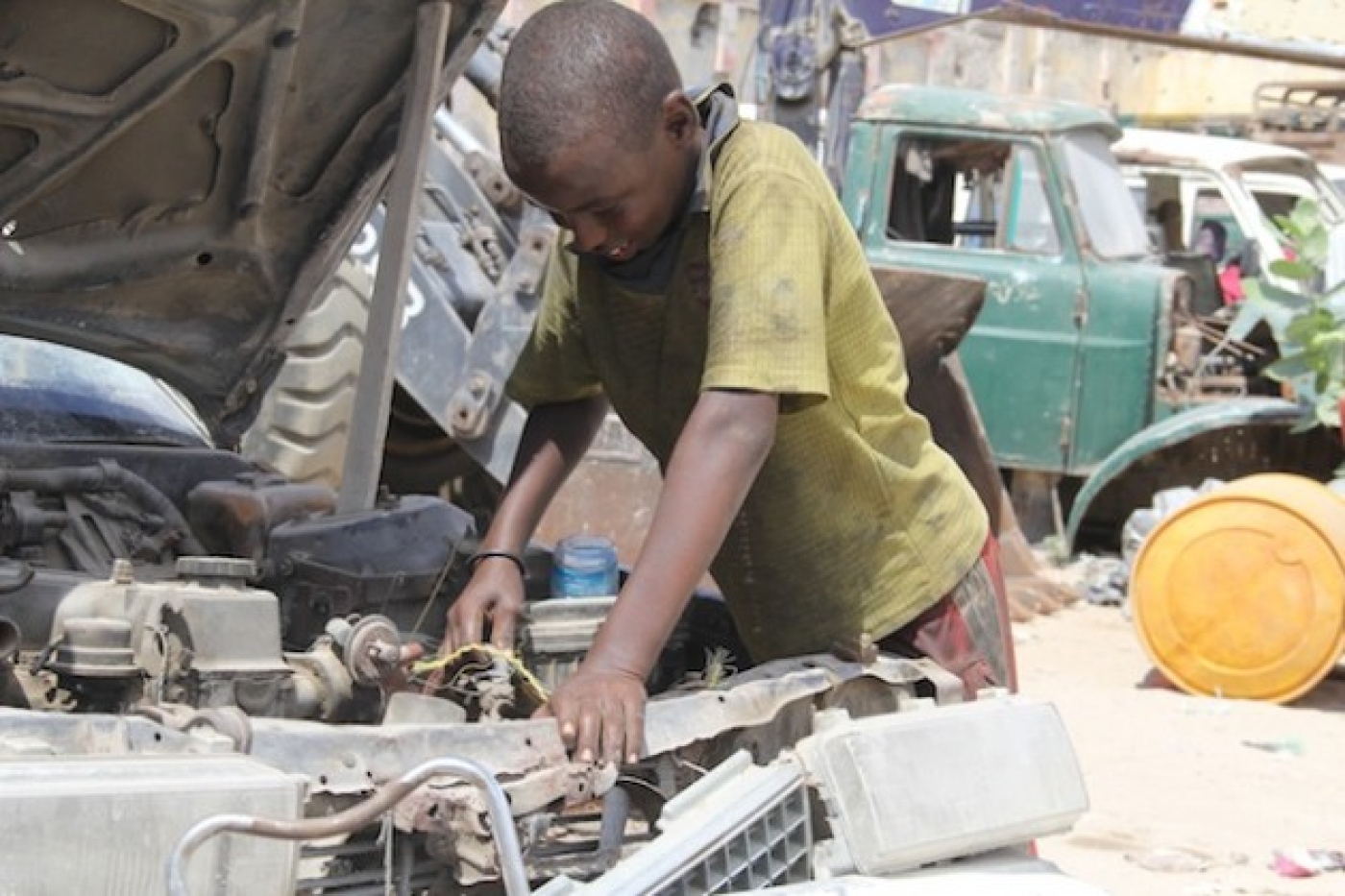 NAIROBI/MOGADISHU - Twelve-year-old Halima Mohamed Ali wakes up every morning at five am, but unlike her peers she does not go to school. Instead, she begins her duties as a nanny for five children, the oldest of whom is just two years younger than she is.

She starts off by making breakfast, then wakes the children and washes and dresses them in time for school or madrassa, institutions of religious instruction.

War and famine in Somalia have forced Halima, and thousands of others like herself, to abandon the dream of education and become workers instead. UNICEF statistics from 2011, the last time such data was collected, show that half of all children between the ages of five and 14 hailing from the country’s central and southern regions are employed.

In Puntland and Somaliland, which have been more stable than other parts of Somalia for the past two decades, more than a quarter of all children work for a living.

The grueling jobs for which they are hired – mostly manual and domestic labour – pay little but demand a lot.

Halima says she works from “sunrise to sunrise”, cooking, ironing, washing floors, bathing the children, and finally putting them to bed before calling it a day. “It is a very stressful job,” confessed the girl, who has never set foot in a classroom.

She’d love to shirk her duties and bury her nose in a book, but her 50-dollar monthly salary is a lifeline for her family of five, who have no other breadwinner.

Surrounded by her mother and young sisters on one of her rare half-days off, Ali told IPS, “If I miss even a single day of work, my family will go to bed hungry.”

It is a tremendous burden for a child, but compared to the hardships the Ali family has endured, sending young Halima off to work is not the end of the world.

Originally hailing from the Dinsor district in Somalia’s southern Bay region, located about 266 km from the capital Mogadishu, the family fled the deadly famine in 2011, narrowly missing becoming statistics along with the nearly quarter of a million pastoralists who starved to death as a fierce drought consumed the countryside and resulted in hundreds of thousands of livestock deaths.

When they finally reached Mogadishu, the family took shelter in a makeshift camp called Badbaado, which means ‘salvation’ in Somali, along with 50,000 others refugees.

At first, the camp’s occupants received food rations, shelter and medical assistance, Ali said, but when the United Nations declared an end to the famine in February 2012, the flow of aid slowed to a trickle. Few of the displaced have been able to find work – lacking formal education and possessing no skills beyond the ability to farm or rear livestock, they have turned to the only option open to them: sending the children out to make a living however they can.

Though Halima is exhausted at the end of her 17-hour workday, she is glad of the chance to provide for her family.

Her story echoes those of countless others in the East African nation, according to Mohamed Abdi, programme manager of Somali Peace Line, an organisation that promotes and protects the rights of children.

“Hundreds of girls are brought to Mogadishu from rural areas where there is [extreme] poverty and famine conditions … to work as domestic servants in middle-class homes. They work long hours for food, lodging and low wages, which they send back to their families,” Abdi told IPS over the phone from the capital.

“Lucky ones” like Ali get paid on a regular basis, Abdi said; many others have their meagre salaries withheld for months, are cut off from their families, abused and treated like slaves.

He strongly believes that the on-going violence across Somalia, caused by the outbreak of civil war in 1991, will ensure a steady stream of child labourers, as desperate families lose jobs, and hope.

“When we try to convince parents not to send their children to work, they ask us for alternative sources of income, which we cannot provide,” he admitted.

Citing a human development report released in 2012 by the United Nations Development Programme (UNDP), Abdi said more than 70 percent of the population of 10.2 million are classified as “low-income”, with 73 percent of all Somalis living on less than two dollars a day.

The unemployment rate is one of the highest in the world, with 54 percent of all Somalis between the ages of 15 and 64 out of work.

In addition to being vulnerable to informal labour conditions such as long hours, children like 11-year-old Hassan Abdullahi Duale also receive lower wages than their adult counterparts, even when they perform all the same functions.

When his father was killed in a suicide bomb blast in Mogadishu two years ago, Duale – the only boy in the family – left school and took a job in a car-repair centre where he works 12-hour days to support his mother and two young sisters.

Dressed in his ‘uniform’ of an oil-soaked Arsenal T-shirt and matching shorts, Duale tells IPS that his uncle got him this job so his family would be able to eat. Though he is tempted to quit and go back to school, he feels responsible for his family.

With the idea of formal education a distant memory, his only hope is to make a career as a mechanic. For now, however, he is paid far less than his co-workers, and is sometimes even forced to do their jobs without earning a single extra coin for his efforts.

“On a good day, when there are lots of cars to fix, I earn 50 Somali shillings (about 2.5 dollars) a day. On bad days, I am just given my lunch and sent home with nothing,” said Duale, sweat dripping down his face.

“The adults earn about 150 shillings (roughly 7.5 dollars) each day, and sometimes they take my earnings by force. There’s nothing I can do and no-one to complain to, so I just wait for the next working day,” he added.

But challenges in law enforcement mean these commitments on paper have not amounted to much in practice. Various studies and reports have found children as young as five years old engaged in virtually every industry, from construction to agriculture.

In addition to their exploitation for military purposes – operating checkpoints, becoming suicide bombers or taking up arms, for instance – children all across southern Somalia can also be seen working on the streets, washing cars, shining shoes and selling khat, a plant that contains an amphetamine-like stimulant.

“The government believes that making education more accessible to the children can help to eliminate child labour and we are in the process of [implementing] such programmes aimed to bring more children back to school,” Haddad told IPS.

“We have launched the ‘Go-2-School’ initiative, which aims to provide one million children with free education,” he added. However, these plans have yet to bear fruit: according to the United Nations Children’s Fund (UNICEF), only 710,860 youth out of 1.7 million primary school-aged children are enrolled in any kind of education.

Without a drastic interruption of the vicious cycles that perpetuate child labour, the future looks bleak for Somalia’s youth.