Alliance of Kurdish mafia and IS fighters rallies to new banner, and surrender is the furthest thing from their minds 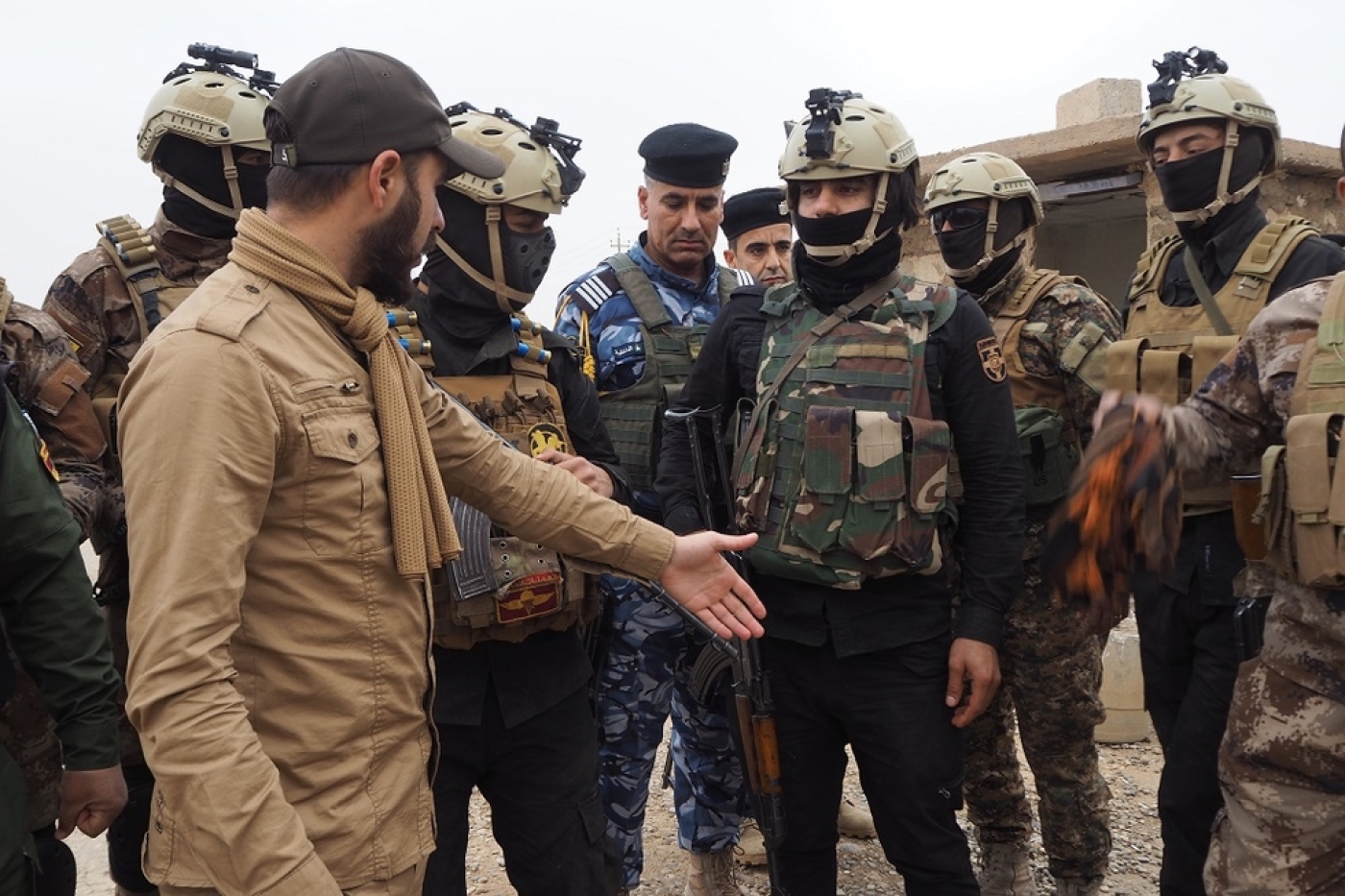 The Jambur oil facility was secured by Iraqi forces in October, as the government regained control of disputed territories from the Kurdish Regional Government following its disastrous independence referendum. But, commanders say, the facility is still under daily attack from a militant group hiding out in the Jambur mountains.

'White Flags attack most days. They have plenty of weapons, including artillery and mortars'

Said to be an alliance of former Islamic State militants and disgruntled Kurdish mafia members pushed out of the nearby town of Tuz Khurmatu, the group are known locally as the White Flags, after their banner - a black lion on a white background.

Although the White Flags appear to be something of a mythical entity - photographic evidence is limited to a few widely circulated images on social media - to the forces holding the Jambur frontline, they pose a very real threat.

"The White Flags attack us most days, usually at dawn or dusk, and they have plenty of weapons, including heavy artillery and mortars," Ali Ghazi Swaish al-Obeidi told MEE, gesturing towards the mountains.

Obeidi commands a unit of the Hashd al-Shaabi Jundil Imam Brigade, which is responsible for security at the oil facility and extensive pipelines that carry oil from the Jambur fields to the main North Oil Company processing stations in Kirkuk.

"They are a mix of IS fighters and local Kurdish mafia guys. We know they fight under this white flag because, after our biggest battle against them here, where we had three martyrs and killed four of them, we found one of their white flags."

Obeidi estimated that there were at least 500 fighters operating in the mountains but said the number could be as many as 1,000.

"The White Flags are members of IS and independent local Kurdish militias. They are not from the Peshmerga or any official Kurdish security forces," the head of Iraq's Special Forces Emergency Response Division (ERD), Thamer al-Husseini, told MEE, in Tuz Khurmatu.

Husseini said his forces had amassed in the town, 20km south of the Jambur frontline, to prepare for the liberation of the mountain range. "We do not think there are large numbers but they are occupying the mountains behind Tuz Khurmatu and behaving like terrorists."

The division recently beat back attacks from the White Flags on Tuz Khurmatu, in Iraq's Salah-al-Din province, as the first phase of the operation. They are now securing the town to enable residents to return to their homes, before moving troops into the mountains.

Husseini said the battle to liberate the Jambur mountains was imminent and would be a joint one, led by the ERD, and supported by Iraq's Hashd al-Shaabi forces and the KRG's Peshmerga, who will stage their part of the offensive from the KRG's post-October 2017 boundaries.

"The operation will be led by us from this side and by the Peshmerga from inside Kurdistan," he said.

"We have already been in talks with Peshmerga commanders and are arranging the details to make this a joint operation. We just deal with military commanders, we are not involved with any political matters between Iraq and the KRG."

What do the White Flags want?

According to Obeidi, the main aim of the White Flags is to regain control of the oil facilities, to enable them to continue what he claimed had been lucrative oil thefts. He said his forces had found widespread evidence of extensive oil theft carried out during the 14 years the area was under Kurdish control.

"We have already dug up four kilometres of small-gauge pipes which were fitted to the mainlines to tap the oil, stealing it and transferring it to other areas," said the Jundil Imam Brigade's head of civilian affairs, Faisal Ghazi.

"These thefts were carried out under the watch of the Kurdish security forces for 14 years. They should have been protecting the oil but they were also either overseeing, or involved in, stealing it for illegal trade and sales.

"There was no government control here for 14 years so they could do what they wanted."

"There are indeed some places where oil thefts have been taking place but, since October when we started taking back control, we have removed these small pipes used by thieves and repaired the damage," he said.

"We are undertaking legal procedures against some of those responsible for stealing oil but we suspect such thefts are ongoing in some northern fields we do not control."

Obeidi said that the White Flags had damaged some oil infrastructure which lay beyond his force's area of control but was adamant that the Jambur degassing station and its employees were fully secured by his force of 500 men, which include 50 Kurdish fighters.

"We are here primarily to protect the oil facility and pipelines because the oil belongs to all Iraqi people, not just small groups or certain areas of the country," he said.

A road to more destruction

The White Flags also wanted to regain enough territory to reopen a strategic road to the Hamreen mountains near Hawija to enable rogue IS fighters to join their ranks, Obeidi said.

Hawija, IS's last outpost in Iraq, was liberated in October last year but, instead of putting up a final defence, many IS fighters fled the town to hide in outlying rural areas.

One of the most heavily guarded areas en route to the Jambur oil facility, which is only possible to reach with a heavily armed escort via a route sealed off from the main Baghdad to Kirkuk highway and lined with military outposts, is the closed road that runs to the Hamreen mountains.

Whoever they really are, their emergence was an expected consequence of the defeat of IS in the area and the reclamation of disputed territories by Iraqi government forces, according to local military commanders.

In an interview with MEE in November, the Hashd al-Shaabi commander in Tuz Khurmatu, Ahmed Assad Cheirli, predicted the emergence of militant entities in the Jambur mountain range.

"There are several camps behind the mountains. One is an IS training camp called Perkanna where there are still active IS members and there is at least one other camp there, housing displaced people from 43 villages in this area who supported IS," he said.

No friends in the mountains

After fierce clashes in Tuz Khurmatu, as government forces made the push to reclaim the disputed territories of northern Iraq, he said Kurdish fighters and members of mafia groups which had long-operated in Tuz Khurmatu fled towards this same mountain range.

"There is some Kurdish presence there too, who we believe are helping the IS members and their families," Cheirli said. "What we saw around Tuz Khurmatu was that some Kurds used IS to help them gain and maintain control of territory they wanted, and we believe there is still some existing relationship between them behind those mountains."

The Iraqi government is continuing its programme to resettle displaced people in the Salah-al-Din district in both Tuz Khurmatu and outlying towns and villages formerly occupied by IS.

But the programme remains a challenging one, with the widespread destruction of homes, a near-total lack of infrastructure and the issue of families of former IS militants all posing problems.

When former residents of the nearby town of Suliman Beg were welcomed back to view the state of their homes in a high-profile event last week, three families identified as former IS supporters were found hiding among the civilians, a senior ERD source told MEE.

They were arrested after journalists had left, he said.

The future of former IS militants and their families remains one of Iraq's most complex post-IS problems and, with almost nowhere else left to run to, the Jambur mountains appear to be something of a final refuge. Iraq at War
'They can't fight without us': Iraq's Shia-led groups refuse to down weapons