No war to see here. Just a game of Iranian-Israeli chicken

For all the power point presentations and rhetoric, neither Iran, nor Israel has any intention of starting a war. It would disrupt their interests On the surface, judging by the inflammatory statements the Israeli and Iranian leaders have made recently and flashy headlines, the two enemies are heading toward a war.

The reality, however, is completely different. The possibility of any war should be seen through two dimensions: intentions and capabilities. Look at those two elements and one quickly concludes that war between Israel and Iran is not on the horizon.

Neither side has any intention of starting a war. On the contrary, they wish to avoid it. A war at this point will disrupt their interests

Neither side has any intention of starting a war. On the contrary, they wish to avoid it. A war at this point will disrupt their interests.

Iran wants to consolidate its military presence in Syria and safeguard its expansion policy of creating a land corridor – a Shia crescent – from its territory through Iraq, Syria and Lebanon to a foothold on the Mediterranean.

The number one priority for the Iranian leadership is the country's economic crisis. The rial has plunged in recent weeks and may sink further in anticipation of the US decision to walk away from the nuclear agreement and impose more sanctions.

Israel, on the other hand, hopes that the relative peace and tranquility on its borders, which is helping to bolster its booming economy, will continue. The Israeli leadership is fully aware that in a future war it will be challenged on one united northern front combining Syria and Lebanon as one unity.

Using war scenarios and simulations, the Israeli army has learned that Israeli cities will be the prime target showered with tens of thousands of rockets and missiles fired by Hezbollah, Iran and the Syrian army, causing heavy casualties among civilians.

Furthermore, Iran and Israel are not alone in this game. Russia and Bashar al-Assad's regime are also omnipresent.

Neither wants Syria to turn into a battleground between Israel and Iran. Both have a common goal which stands in sharp contradiction to the notion of war: Syria and Russia wish to pacify and stabilise Syria and enable the Assad regime to extend its control.

War is not really a good recipe to achieve such goals, especially when Russia is preparing to host the World Cup over the next two months. A war now between Israel and Iran will not serve Syrian and Russian interests.

When it comes to capabilities, Iran is not a match for the Israeli military machine. Israel has complete superiority with its modernised air force and firepower and its geographic proximity to the battlefield.

Iran, on the other hand, has around 2,000 military advisors in Syria, a very small number. They are supplemented by approximately 20,000 militiamen recruited among Shia communities in Iraq, Afghanistan and Pakistan. They are poorly trained and equipped.

Iran can use the much more experienced and skilful forces of Hezbollah, which are its main foot soldiers in the mission to consolidate Assad's rule. But as Hezbollah Secretary General Hassan Nasrallah already said, the threats of war exchanged between Iran and Israel are their own business, not his.

What has created the wrong impression that war is unavoidable are a few facts.

In the past year, Iran has increased the shipments of weapons to Syria not only to equip Hezbollah with accurate missiles, but also to prepare for its own future deployment in the country. Iran also established its own enclaves in Syria's army bases and airfields.

Israel interprets all of these moves as indicators of Iran's long-term intention to have a strong presence in Syria in general and near the Israeli border in particular.

In order then to deter Iran, Israel has launched a campaign of air strikes against Iranian bases and weapons depot in Syria. Without claiming responsibility, the Israeli Air Force carried out in the last five months at least five major attacks. Dozens of Iranian military advisors, including a colonel in the Iranian Revolutionary Guard, were killed.

An attack on 9 April against the T-4 airfield in Homs province angered Russia, which denounced Israel, but it has remained silent in regard to all the others, giving the impression that it tolerates them.

Iran too has mostly kept quiet except on two occasions. In February, it sent an attacking drone equipped with explosives from one of its Syrian bases to an Israeli military base. But the Israeli air defences and air force shot it down after it entered Israeli territory without causing any damage.

In the second case, after the strike against T-4 in April, Iran admitted that seven of its advisors were killed including the Revolutionary Guard colonel.

Iran's pride suffered a further blow this week when Netanyahu revealed how the Israeli spy agency Mossad managed to find out and steal Iran's central archive of its nuclear programme, including its past nuclear military activities.

Iran promised to retaliate against the Israeli air strikes and the killing of its personnel. Vice commander of the Iranian Revolutionary Guards Corps, Hossein Salami, said two weeks ago in a speech in Tehran that Israel's airbases are “within reach” and Iran’s “hands are on the trigger and missiles are ready".

Israeli intelligence assumes that Iran is indeed very serious about it and are taking the threats seriously. Iran may launch missiles from Syria, or use Hezbollah from Lebanon (after Sunday's elections there) or by plotting a terrorist attack against an Israeli target such as an embassy abroad.

But at the same time, the Israeli leadership is also very determined to pursue its national interests to stop Iran's military presence in Syria. This goal is not a capricious decision by Netanyahu to divert attention from his domestic troubles and corruption charges he faces.

It is not even related to the new law giving the cabinet the possibility to transfer the authority to declare war to the prime minister and defence minister. The policy is shared and even encouraged by both his entire cabinet and the military top echelon.

It’s brinkmanship. A game of chicken. Israeli decision-makers and army commanders believe that Iran will be the first to blink and back down. But they have also to take into account that their assumption could turn into a miscalculation. 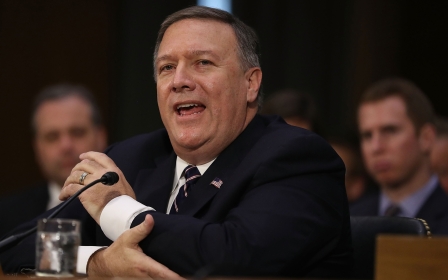