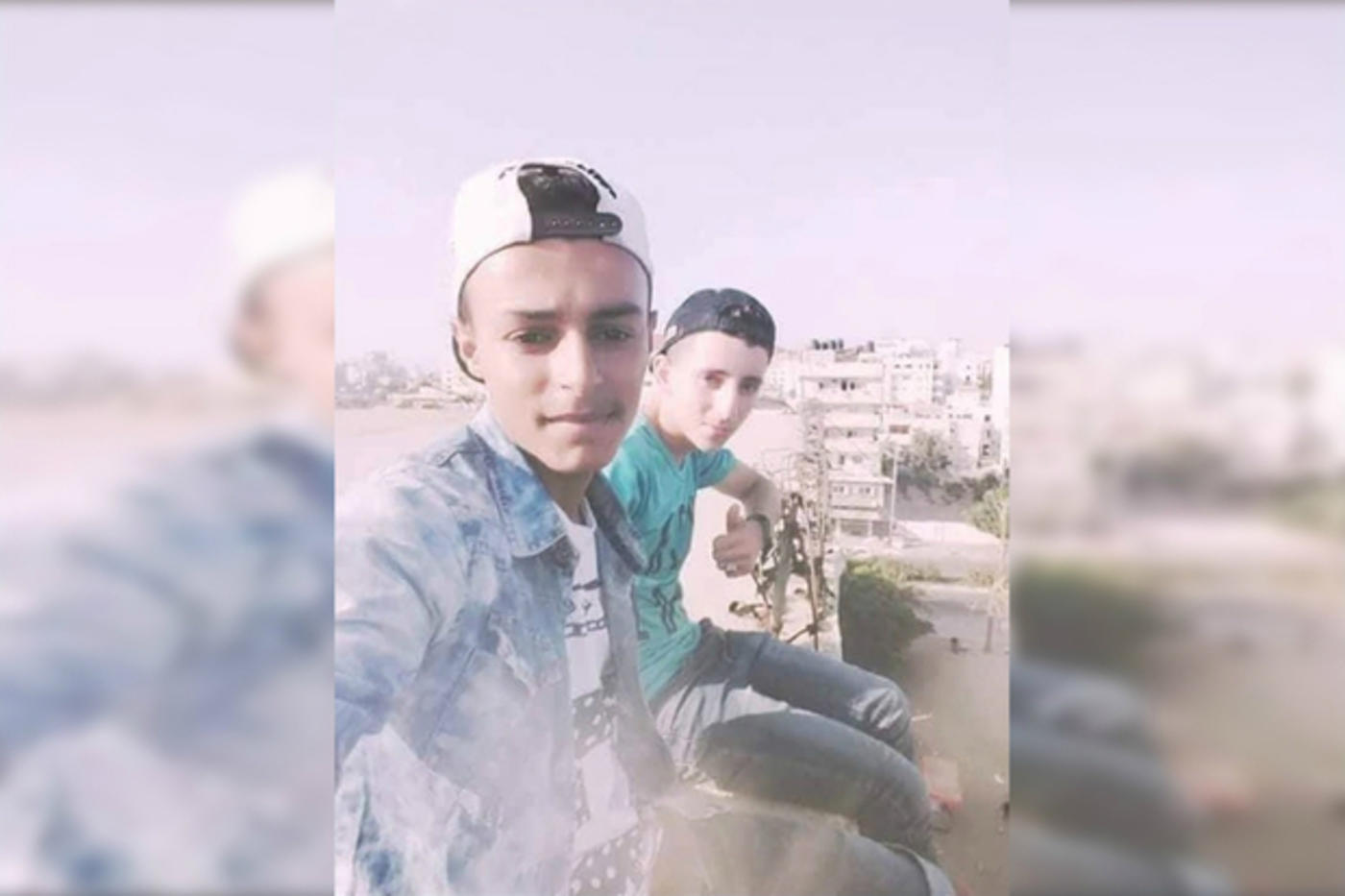 The last selfie taken by Luay Kahil, 16 (left), and Amir al-Nimra, 15. On top of an unfinished building, al-Katiba Square, 14 July, before an Israeli air strike killed them both (Social media)
By
MEE staff

A form of "non-lethal" attack used by the Israeli army in Gaza was responsible for the deaths of two Palestinian teenagers in July, according to a new report by the B'Tselem human rights organisation and the Forensic Architecture research group.

Luay Kahil, 16, and Amir al-Nimra, 15, were killed during a day of air strikes on 14 July, while sitting on the roof of a house overlooking Al-Katiba Square in Gaza City.

The attack that targeted them is known as "knocking on the roof" by the Israeli military, where a loud but supposedly non-destructive munition is used to warn the residents of a building that it will soon be targeted. The Israeli army describes the attack as "non-lethal" on its website.

However, the new report - released as a video on Monday - suggests that, rather than being viewed as a warning shot, the technique should be viewed as an outright attack, and therefore in violation of international laws on the targeting of civilians.

"The firing of lethal missiles as a means of warning is unlawful and, for all intents and purposes, constitutes an attack," wrote B'Tselem.

"As such, the action must abide by the applicable rules set out in international law, including adhering to the principle of proportionality and the duty to provide effective warning. None of this was done in the case at hand."

The report said that the two teenagers were killed at 5.45pm by the first of four warning missiles launched by the Israeli military. According to evidence gathered through study of open source content, the projectile was likely an "anti-personnel missile armed with lethal fragments".

"Such a strike should be considered a military attack and, as such, subject to all restrictions set out in international humanitarian law."

The Israeli military claimed that it had not seen the two teens on the roof prior to the attack.

However, when the Israeli army released video footage of the four warning strikes shortly after the attack, they omitted footage of the first, lethal attack and substituted it for another.

In response to an inquiry by the New York Times, the military denied there had been any attempt to obfuscate the evidence of the attack.

“Any allegations that the IDF knowingly distorted or edited video footage are totally baseless and false,” said a spokesperson for the Israeli Defence Forces (IDF).

►
Read More »
Together until the end: The last hours of two Gaza teens
Read More »

He added that the first time he had seen visual evidence of the boys on the roof was in the B'Tselem video.

“We don’t know if the boys were visible to the military before the first strike,” said Amit Gilutz, a B’Tselem spokesperson, quoted by the New York Times.

“If so, they should have aborted. If not, that raises grave concerns as to the military’s surveillance capabilities.”

The 14 July attacks were at the time described by Prime Minister Benjamin Netanyahu as the "hardest blow" Israel had inflicted on Hamas since the 2014 war.

More than 2,200 Palestinians were killed in the July 2014 war in Gaza, mostly civilians, while 75 Israelis, mostly soldiers, are also thought to have been killed. Occupation
Child dies of wounds after being injured during Gaza protests