A senior French fighter has been detained by Hay'at Tahrir al-Sham (HTS) in a new round of arrests by the militant group in Syria's opposition-held Idlib province.

Omar Omsen, the leader of the Firqatul Gharaba brigade, was taken into custody on Saturday after attending an HTS court hearing in relation to his earlier arrest on 12 August, Firqatul Gharaba said in a statement.

Three other members of Firqatul Gharaba, a militant group dominated by European fighters, were also detained, it said. 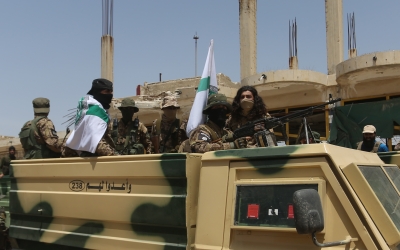 The statement said that Omsen had been summoned to court for matters concerning a “reconciliation” following a dispute with some members of the Turkistan Islamic Party (TIP), an independent Uighur militant group based in Idlib.

Firqatul Gharaba and TIP fighters have fought alongside each other in the past and the groups are considered to be allies.

An HTS spokesperson confirmed the arrests but gave no further details.

Omsen, whose real name is Omar Diaby, was born in Senegal but grew up near Nice in the south of France. He travelled to opposition-held Syria in 2013, joining others from France and Belgium fighting alongside the al-Qaeda-aligned Nusra Front.

Omsen was considered to be a prominent recruiter of fellow fighters in France and gained notoriety after reportedly faking his own death in August 2015 in order, he said, to leave Syria to undergo surgery undetected, before re-emerging in a television interview in May 2016.

He was subsequently designated as a terrorist by the US, who said his propaganda videos had been “credited as the chief reason behind why so many French nationals have joined militant groups in Syria”.

Omsen's Firqatul Gharaba brigade is estimated to consist of about 70 fighters, according to Jean-Charles Brisard, the head of the Paris-based Centre for the Analysis of Terrorism (CAT).

Brisard told the Nice-Matin newspaper: "He is someone whose longevity rests on fragile balances with alliances of circumstances that he forges with groups. He maintains himself in a rather precarious way, these alliances meaning that he is arrested from time to time due to internal disputes."

Omsen's arrest comes amid a months-long crackdown on dissent and opposition by HTS, a coalition of militant fighters that includes many who formerly fought under the banner of the Nusra Front, the dominant force in Idlib.

Those currently being held by the group include Bilal Abdul Kareem, an American journalist and Middle East Eye contributor, and Tauqir Sharif, a British aid worker.

Last week, Sharif's family released a video filmed by Sharif after he had been freed on bail following his initial arrest in which he accused an HTS interrogator of torturing him. An HTS spokesperson denied the existence of torture in the group's prisons.

Meanwhile, HTS security forces were accused of firing gunshots to disperse a protest by the wives of detained Hizb ut-Tahrir members in the Idlib town of Atmeh on Saturday. A video appeared to show women running away as gunfire can be heard.

Another video showed the women protesting outside a court in Atmeh, during which an assailant appeared to grab a mobile phone from a woman as she was using it to film the gathering.

A spokesperson for HTS told the pro-HTS Ebaa news agency that none of the women had been arrested, but confirmed that the protest had been dispersed.

“Hizb ut-Tahrir members incited women and children to enter the court under the pretext of demanding their husbands, which increased tension,” he said.

“The court guards communicated with the security services in the area and the demonstration was terminated, without arresting any women." 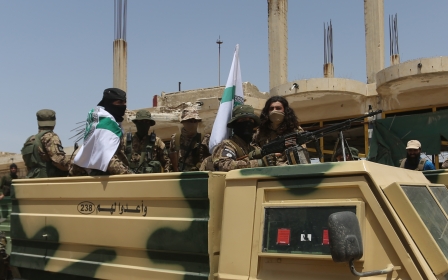