US President Obama has publically acknowledged that his security establishment “underestimated” the opportunity that a collapsing Syria would provide for militant groups like Islamic State and al-Qaeda to regroup and stage a sudden comeback.

In an interview, due to air on America’s CBS 60 Minutes programme on Sunday night, Obama admits that the US and its regional allies did not do enough to stem the rising militant tide.

"I think our head of the intelligence community, Jim Clapper, has acknowledged that they underestimated what had been taking place in Syria," Obama said, referring to his director of national intelligence.

Asked whether Washington has also overestimated the ability or will of Iraq's US-trained military to fight the militants on its own, Obama said: "That's true. That's absolutely true."

"Essentially what happened with [Islamic State] was that you had al-Qaeda in Iraq, which was a vicious group, but our marines were able to quash with the help of Sunni tribes," Obama explained. "They went back underground, but over the past couple of years, during the chaos of the Syrian civil war, where essentially you had huge swaths of the country that are completely ungoverned, they were able to reconstitute themselves and take advantage of that chaos."

The news comes as a NBC poll revealed that 72 percent of Americans believed that US combat troops would eventually end up being deployed to fight IS, despite repeated White House insistence that there would be no boots on the ground.

Obama had long opposed intervention in Syria and shied away from seriously arming and training the so-called “moderate” opposition until earlier this month when US Congress voted to help train 5,000 rebel fighters and the US-led alliance first began pounding IS and other militant positions in Syria.

Islamic State was able to "attract foreign fighters who believed in their jihadist nonsense and travelled everywhere from Europe to the United States to Australia to other parts of the Muslim world, converging on Syria," Obama said. "And so this became ground zero for jihadists around the world."

Obama was a key advocate for the US withdrawal from Iraq, which he oversaw between 2009 and 2011, but has now admitted that Iraqi policy since the military pull-out has helped to play into the hands of the militants.

In the interview, previews of which have been released by CBS, Obama goes on to explain that IS has been greatly assisted by former Baathist troops and military leaders that have provided "traditional military capacity" to the terrorist group in Iraq.

"That's why it's so important for us to recognise part of the solution here is going to be military," Obama said. "We just have to push them back, and shrink their space, and go after their command and control, and their capacity, and their weapons, and their fuelling, and cut off their financing, and work to eliminate the flow of foreign fighters."

Aside from military action, Obama also stressed that the US would have to intensify its efforts to reach a political solution in both Iraq and Syria.

The US president said that part of the solution would be have to be military - citing the US-led strikes against IS-controlled oil refineries and fields that provide the group with much of its - but also insisted that Syria and Iraq would have to resolve their political crises.

"What we also have to do is we have to come up with political solutions in Iraq and Syria, in particular, but in the Middle East generally that arrive in the combination between Sunni and Shiite populations that right now are the biggest cause of conflict, not just in the Middle East, but in the world," Obama said.

The US first began bombing IS positions in Iraq in late August after militants managed to seize vast swaths of the country. While US military assistance initially bolstered Iraqi Kurdish Peshmerga fighters and Iraqi army troops, the IS rollback soon stalled.

Despite today’s gains - which saw Iraqi troops fight off an IS advance in the strategically key town of Amriyat al-Fallujah, some 40 kilometres west of Baghdad - recent days have seen Iraqi forces suffer a stinging of setbacks in Anbar province, notably when IS fighters attacked bases north of Fallujah.

Last week, some 300 Iraqi soldiers were also either killed or captured in Saqlawiyah, a central Iraqi town about 70 kilometres from Baghdad. The Iraqi authorities put the figure much lower at 155 killed or injured, but the toll is nonetheless understood to be great.

"They were going without reinforcements or air cover," Ali, an army officer who survived the five-day IS siege, told Al Jazeera:  "When we withdrew from our sites in Saqlawiyah, the bodies of soldiers and burned military vehicles were everywhere. We could not evacuate them as the priority was to evacuate the wounded soldiers."

US efforts in Syria have similarly yet to yielded immediate results. On Sunday, thousands of mainly Syrian Kurdish refugees continued to flee north as fighting between local forces and IS militants continued to rage despite the US-led coalition reportedly bombing several IS positions near the besieged Kurdish town. 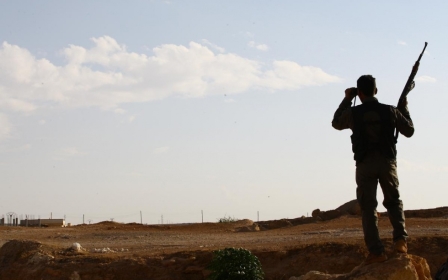