Oman’s Duqm, a new port city for the Middle East?

The desert boomtown seeks to be an alternative shipping hub for the Gulf, bypassing the flashpoint Strait of Hormuz 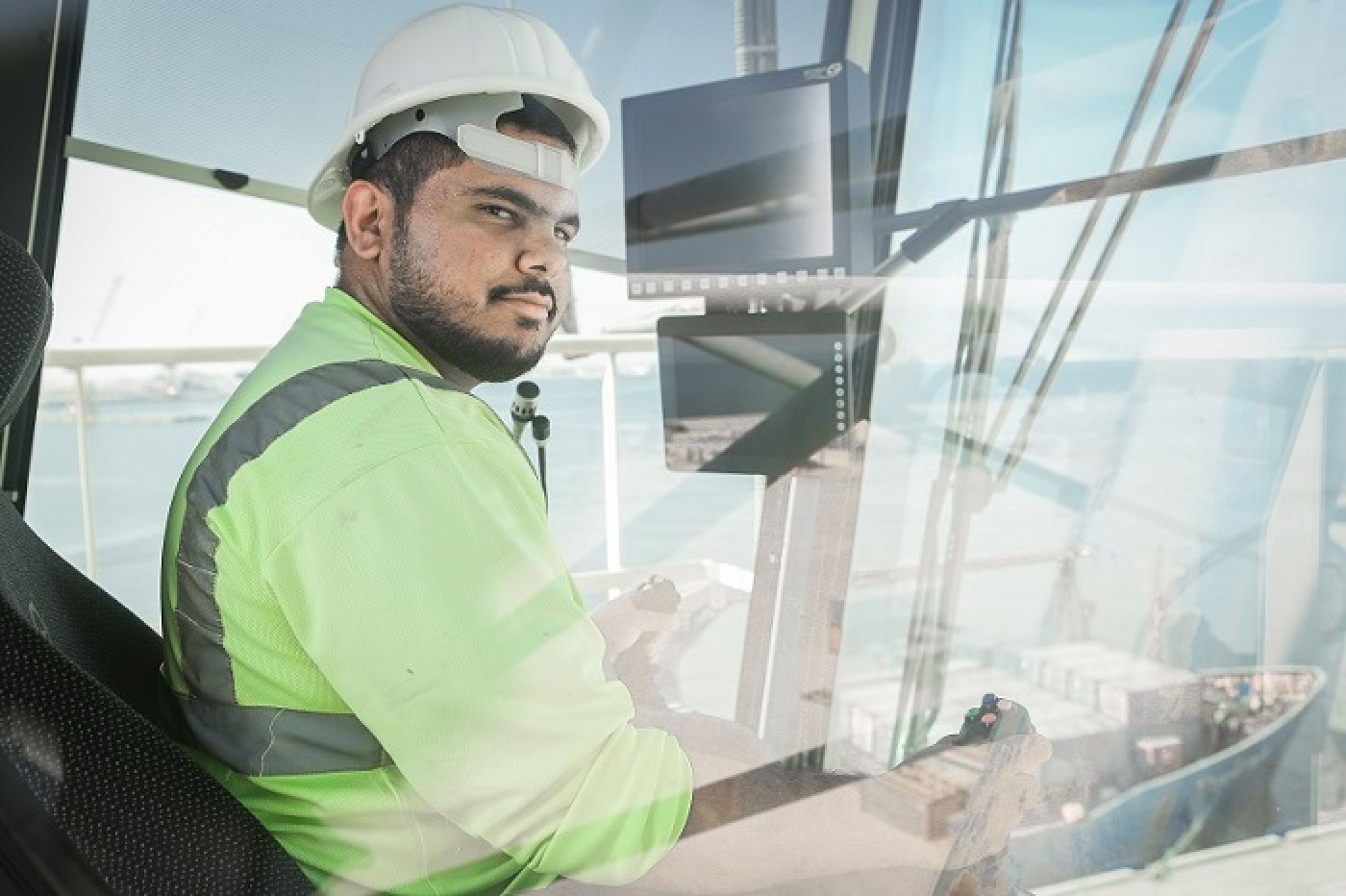 A detached observer might describe it as a bleak scene, but Salah Hamood al-Hasni is bullish as he contemplates the arid steppes that border the headquarters of the Duqm Special Economic Zone Authority (SEZAD).

Taken together, the economic projects underway here represent an investment of several billion dollars. Chinese firms aim to eventually invest up to $10.7bn.

Taking inspiration from the world's maritime capital, Singapore, Duqm’s economic zone comprises several projects, including a multi-purpose harbour, a refinery that aims to process 230,000 barrels of crude oil per day, and the largest dry dock in the Middle East, which will have a capacity of 200 ships per year.

“We hope Duqm will be a major player in Oman’s development,” said Talal bin Sulaiman al-Rahbi, head of the technical committee of Oman 2040, a national development project.

Full-scale operations are expected to start by 2020 in a bid to reinvigorate the national economy and tackle a long-standing dependence on the hydrocarbon sector, which accounted for 55 percent of state revenues in 2017.

Duqm sits on the Arabian Sea, a six-hour drive south from Oman’s capital Muscat and a day’s voyage for an oil tanker from the Strait of Hormuz, a narrow passageway through which a third of all oil traded by sea passes. 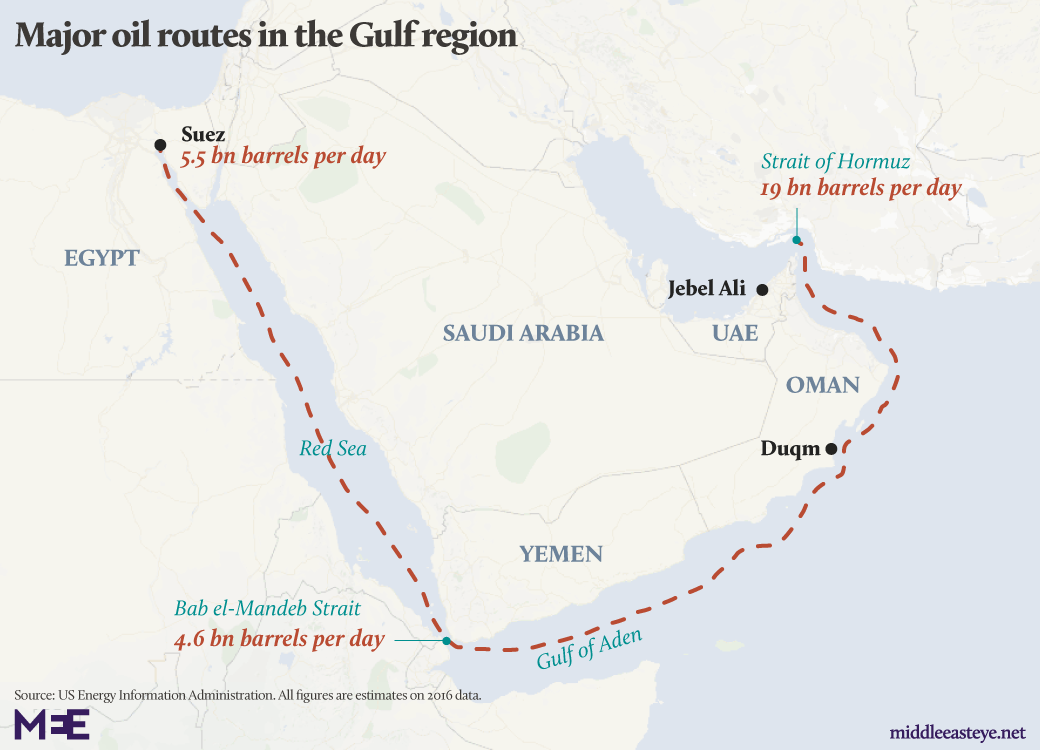 The strait is the doorway to the Persian Gulf, and with Iran frequently threatening to block sea traffic passing through it, the Omani port is geographically well positioned to be an alternative hub for shipping.

Duqm is an upstart that must attract shipping away from Jebel Ali, in the UAE. The biggest deepwater port in the region, it boasts the world’s largest man-made harbour and two huge container terminals where vessels unload cargo before it is re-shipped throughout the Gulf, India and Africa.

Duqm hopes to challenge Jebel Ali for this trade by offering major port access to the main sea lanes between the Red Sea and the Gulf.

According to Saleh Hamood al-Hasni, the port could provide unhindered access to the Indian Ocean for gas, oil and other bulk products arriving overland from the Gulf states.

Without having to venture into the Strait of Hormuz and beyond, the shipping industry would be able, so Oman hopes, to enjoy the same level of access to the Middle East as is afforded by Jebel Ali, but without any of the complications.

“Doing business in Duqm will prevent you from going through any of those instabilities,” claimed al-Hasni, speaking about the Strait of Hormuz.

The Omani town’s economic zone is expected to host “the first refinery in the Middle East to process crude from another Middle Eastern country on a long-term contractual basis,” the Times of Oman reported.

The refinery is a joint venture between the Oman Oil Company and Kuwait Petroleum International, but officials in Duqm could not confirm to Middle East Eye whether or not any country outside Oman had committed to using its facilities.

On top of its various other plans, Duqm is aiming to emerge as a transhipment regional hub, docking large boats from Asia to offload cargo that will be re-shipped to the Gulf and East Africa, Saleh al-Alawi, the head of port operations told MEE.

According to Muhammad Zulfikar Rakhmat, an analyst on China-Middle East relations, Duqm constitutes an important link in China’s Belt and Road Initiative, a state-backed programme to connect Asia with Africa and Europe that is also referred to as the 21st-century Maritime Silk Road, invoking the ancient trade routes that connected east with west.

In 2016, Oman Wanfang, a consortium of six Chinese firms, set out a plan to establish a Chinese industrial city in Duqm and invest up to $10.7bn.

“But I don't see China shifting all its regional trade activities to Duqm because the largest trading partner in the Gulf for China remains the UAE,” Rakhmat said.

Last year, Duqm received about 100 boats, including military vessels. Duqm also aims to stand as a regional base for navy vessels, with the UK recently signing a deal for a permanent naval base in Duqm, the first UK permanent military presence in Oman since 1971.

“We hosted submarines from India and the United States. We even received the USS George Washington, a nuclear-powered aircraft carrier,” said al-Alawi.

Not everyone is happy about Duqm’s transformation. The government has sought to win over the local population with inducements such as a set of 150 luxury villas, which have been given to locals whose lands have been affected by the project.

This has not been enough to buy the silence of the local fishing union that has led criticism of the construction of a new harbour in Duqm. It is expected to be the Middle East’s biggest fisheries hub and the home port for 400 large-scale fishing boats, processing plants and cold storage facilities.

Standing on the fine white sand of a pristine beach, Althebeeb Hamad al-Gunibi, the head of the fishermen’s union in Duqm, protests what is happening to his home. “The fishing community in Duqm dislikes those big boats because they will surely overfish and we are too modest to invest in this project,” he said.

In response to the concern, Duqm’s mayor, Ahmed bin Salim al-Mahruqi, said opposition to the new port is misplaced. “People who disapproved of Duqm’s project will have to welcome change sooner or later… Bedouins used to roam across the desert, but it is no longer the case, they have to now settle down,” he told MEE.

The main argument put to the people is that this vast project could play a significant part in providing much-needed jobs in a country facing persistently high unemployment and a severe job crisis among its youth. Over the next 20 years, the logistics sector could create 300,000 jobs, according to the government.

Since the steep drop in world oil prices in 2014, the Sultanate has borrowed billions of dollars to cover the country’s revenue shortfall. In 2019, Oman expects to borrow $6.2 billion. As a result, debt has more than tripled to nearly 50 percent of Oman’s GDP.

“Oman is under great pressure to achieve economic diversification before the post-oil era begins,” said Giorgio Cafiero, CEO of Gulf State Analytics, a Washington-based geo-political risk consultancy. And Duqm is at the forefront of Oman’s efforts to diversify its economy beyond oil and gas exports.

However, delays are expected, according to engineers working on the project. A GCC railway that was supposed to connect Duqm to the Gulf region is on hold due to the regional economic contraction and the dispute between Qatar and the Saudi-led bloc. “There is no deadline yet,” al-Rahbi said.

When, along with the United Arab Emirates and Bahrain, the Saudis imposed an economic blockade on Qatar in June 2017, it was bad news for neighbouring Oman. Cafiero told MEE that officials in Muscat are unhappy with the blockade and fear its “long-term impact on Oman’s economy and vision”.

The Duqm project relies on deeper economic integration in the Gulf and the crisis between Qatar and its neighbours does not bode well for the project at Duqm.

Despite these challenges, the mayor of Duqm is supremely optimistic. Overlooking the construction site, with the sound of giant cranes breaking the silence of the vast desert, al-Mahruqi laughed. “Duqm could become the future capital of Oman!” 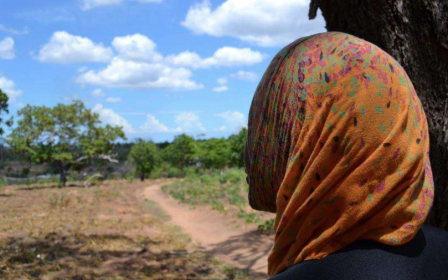