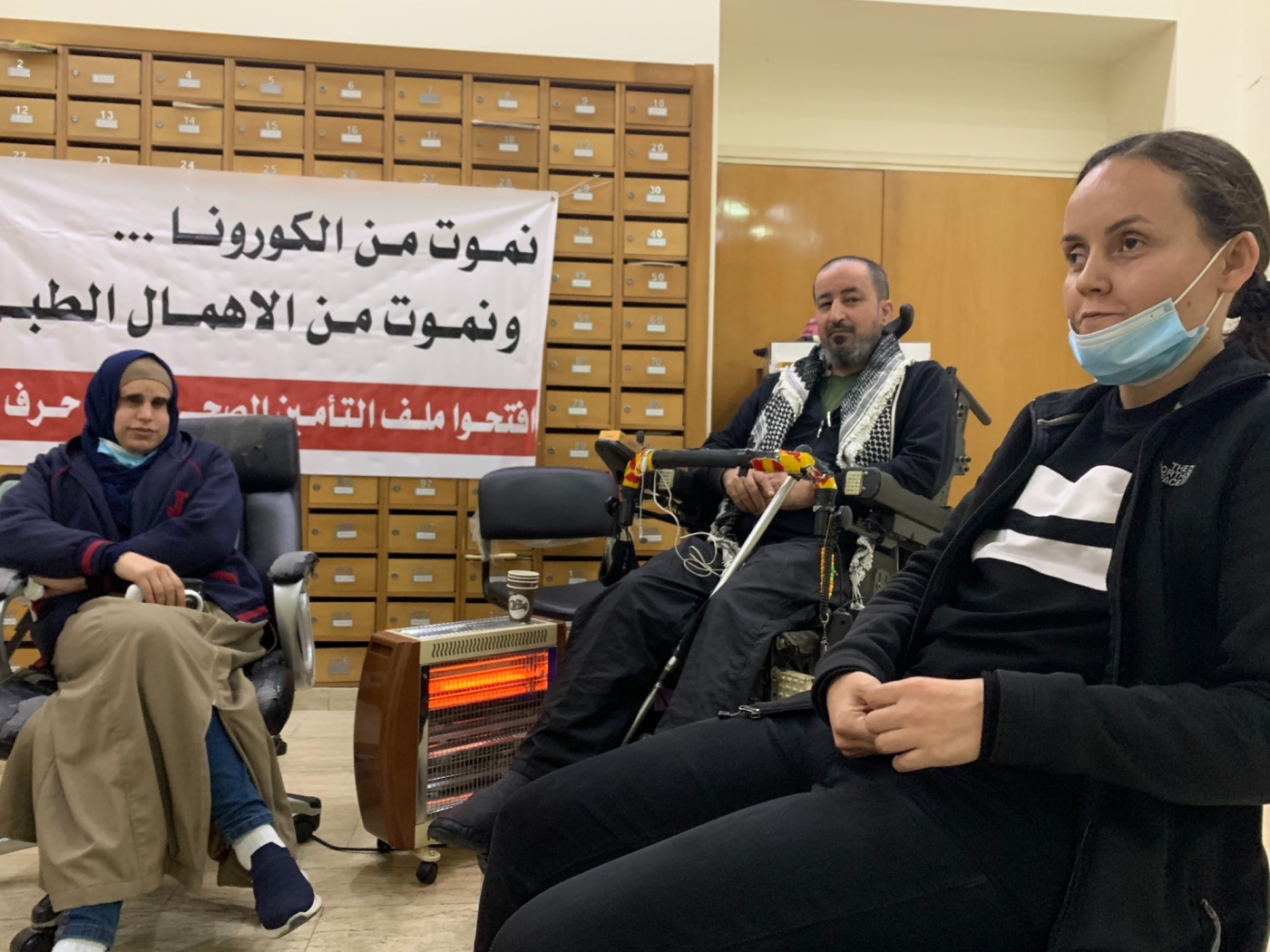 Disability rights activists including Abdelrahman Awwad (C) and Shatha Abu Srour (R) have staged a sit-in for nearly three weeks in Ramallah. The banner reads: "We die of coronavirus and we die of medical negligence" (MEE/Shatha Hammad)
By
Shatha Hammad
in
Ramallah, occupied West Bank

Palestinians with disabilities are in the third week of a sit-in protest inside the offices of the Palestinian Legislative Council (PLC) in the occupied West Bank city of Ramallah, demanding the right to comprehensive health insurance as guaranteed under law.

Under the slogan, "A movement for a decent life for people with disabilities", activists are stressing the need for a just health insurance system, particularly since the Covid-19 pandemic revealed large gaps in the healthcare provided to individuals with disabilities.

Protesters are also calling on the Palestinian Authority to abide by the international treaties it has ratified, most notably the Convention on the Rights of Persons with Disabilities (CRPD).

'As long as we are still trying we have not failed, and today we are becoming more persistent and we won’t back down'

Protest coordinator Shatha Abu Srour told Middle East Eye that the imposition of the state of emergency amid the spread of coronavirus and the precautionary measures taken by the Palestinian government have disrupted the lives of many individuals with disabilities and their dependents, without providing sufficient support to counter these effects.

"People with disabilities were not included in the emergency plan drawn up by the government; they were disregarded,” the 35-year-old, who is vision impaired, said. "We went to the presidential office and asked them to formulate a plan and support it with a budget, but they refused."

The PA is widely seen as having cracked down on local political and social movements in recent years through arrests and the use of physical force, including during the teachers’ strike of 2016 and against the movement calling for the lifting of PA sanctions on the besieged Gaza Strip in 2018.

As such, the renewed push by the disability rights movement is significant and not without risk - but activists are determined to keep pushing.

The Palestinian Basic Law, the equivalent to a constitution, stipulates that any person with a disability has the right to obtain comprehensive health insurance. But Abu Srour, who is the Palestine representative at the Arab Forum for the Rights of Persons with Disabilities, explained that the PA health insurance system does not match up with the Basic Law.

Khadija Zahran, director of the legislation and policy review department at the statutory watchdog, the Independent Commission for Human Rights (ICHR), said that while Palestinian law requires the state to provide a just health insurance regardless of an individual’s type of disability, the existing insurance system is flawed.

She explained that the current system does not cover some auxiliary services, including wheelchairs for people with mobility impairments, as well as hearing aids, certain lab exams, and certain restoration operations that are considered "cosmetic operations".

"The defects are evident in the health insurance system,” said Zahran. “The demands of people with disabilities are consistent with the Basic Law and international conventions that the Palestinian Authority has signed on to.”

While the movement pushing for better health coverage for people with disabilities in the occupied West Bank was initially launched in 2018, it faded out after none of its demands were met or fulfilled by the PA.

That year, the PA Council of Ministers, the minister of development, the Ministry of Health and Development and the Union of People with Disabilities met to formulate new and just legislation, yet nothing changed.

‘We won’t back down’

But the pandemic has prompted the renewal of the movement after it revealed the disparities in healthcare provided to people with disabilities at the levels of diagnosis, medical treatment and rehabilitation.

Abu Srour said that they decided to “fight directly for our issues, the most important of which is obtaining comprehensive health insurance".

In addition to the sit-in, scores of protesters both with and without disabilities have been standing at the doors of the PLC building in solidarity. PA forces have shut down the area in the vicinity and threatened to disperse and arrest the protesters.

Hamza Nasser, 32, a demonstrator, told MEE that he and others tried to protest at the Council of Ministers office - also located in Ramallah - but were prevented from doing so by security forces, who sent a security official for Prime Minister Mohammad Shtayyeh to listen to the protesters’ demands.

"The sit-in succeeded in generating some initiatives by human rights organisations and activists, but what we need is a cabinet response to the movement's demands,” Nasser said.

'We are not holding a sit-in for a group, but for the sake of the whole community. Each one of us is liable to become a person with a disability at any moment'

Abdelrahman Awwad, 46, has not left the PLC offices since the beginning of the sit-in on 3 November. He told MEE of the long journey fighting for people with disabilities’ basic rights.

“In 2017, we carried out a sit-in and we were accused of having foreign agendas. We started back up again in 2018, but we did not achieve anything,” he said. “But as long as we are still trying we have not failed, and today we are becoming more persistent and we won’t back down."

Despite the cold temperatures and their health conditions, the protesters are adamant about remaining at the sit-in.

"Many people with disabilities are currently uncomfortable in their homes and are deprived of many necessary medications and aids,” Awwad said.

“There is no time limit to this protest; it will only end when our demands are met.

"Today we are not holding a sit-in for a group, but for the sake of the whole community. Each one of us is liable to become a person with a disability at any moment.” Children
Autism in a war zone: How children struggle to find the care they need