While his candidacy has yet to be officially confirmed, the popular Palestinian leader is reportedly in talks with his fractured party, Fatah If his candidacy becomes official, Barghouti would be the first candidate in the history of the Israeli occupation to run for the highest post of the Palestinian leadership from behind bars.

Barghouti is currently serving five life sentences in an Israeli prison for allegedly plotting attacks on Israeli targets during the Second Intifada.

Fatah officials familiar with talks of a Barghouti election run told MEE that he was considering whether to run for president. Speaking on condition of anonymity, the sources said that negotiations were currently taking place within Fatah, the longstanding ruling party of the PA in the occupied West Bank.

Incumbent PA President Mahmoud Abbas, who has held the position since 2005, was confirmed earlier this month to be running for re-election, Prime Minister Mohammad Shtayyeh told Al Araby News.

Abbas’s term officially expired in June 2009, but no presidential elections have been organised by the PA in 16 years.

Abbas, 85, announced earlier this month that new parliamentary and presidential elections would take place in July, in an effort to heal longstanding political divisions - notably the rift between Fatah and Hamas, the de facto ruling party in the besieged Gaza Strip.

According to MEE's sources, there have been talks on how to compromise Barghouti's political ambitions without creating an internal clash within Fatah, of which Abbas is the chairman. Options reportedly presented to the imprisoned leader have included him running for the position of head the Palestinian Legislative Council, of which he has been a member since 1996.

Another alternative floated around has been for Barghouti to create his own party and run for president under that banner.

Barghouti's family told MEE they could not confirm whether he intended to run, saying that his stance on the issue would become clearer after a planned meeting in Cairo this week between Palestinian political factions to discuss the election.

Barghouti was born in 1958 in the central West Bank village of Kobar. He was the president of the Fatah Youth Movement while he studied history and political science at Birzeit University. He was first arrested by Israeli forces in 1976, three years after he became a Fatah member.

Barghouti was active during the First Intifada between 1987 and 1993. Israeli authorities arrested him and exiled him to Jordan for seven years, but Barghouti returned to the West Bank in 1994, after the signing of the Oslo Accords. He was elected as an MP in the first Palestinian legislative election of 1996.

He was arrested in the West Bank city of Ramallah in 2002 and sentenced for his alleged role in a series of attacks during the Second Intifada.

In the second PA legislative elections in 2006,  Barghouti headed the Fatah list from prison, and helped draft the National Accord Document to set a national basis of agreement for political factions running for election.

Despite being imprisoned for nearly 20 years, Barghouti remains extremely popular among Palestinians. Public opinion polls by the Palestinian Centre for Policy and Survey Research have regularly shown that Barghouti would win presidential elections, whether he runs within Fatah or with a new party.

One of the officials who spoke to MEE estimated that half of current Fatah supporters would side with Barghouti over Abbas, noting that the rivalry between the two veteran leaders could stoke further divisions within the party.

But before jumping to conclusions on Barghouti's candidacy and the possible impact of a vote, the official cautioned, first it needed to be confirmed whether elections would take place at all. 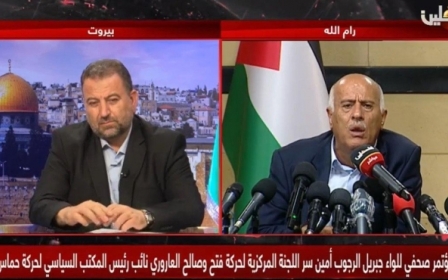