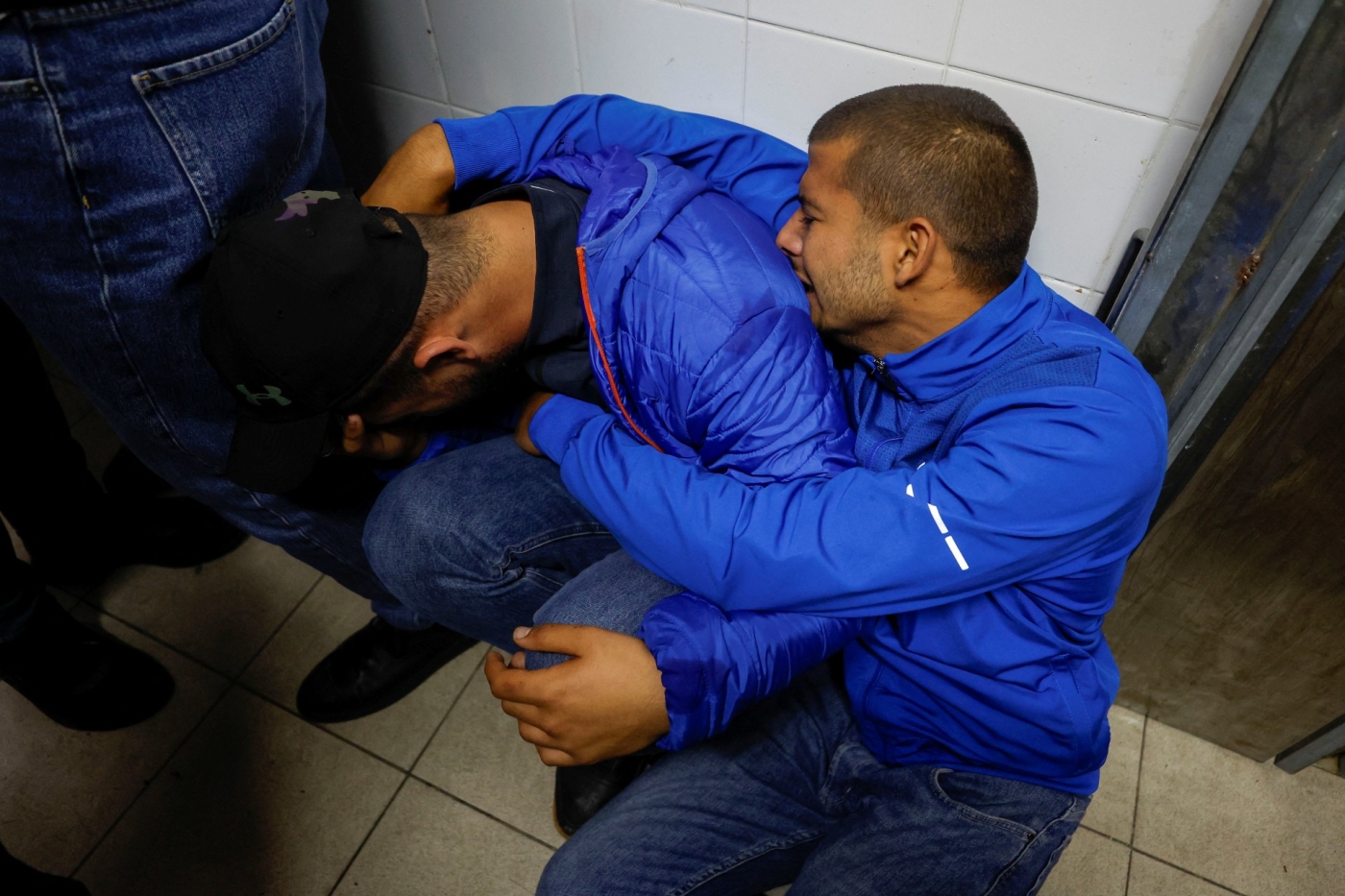 A mourner reacts before the funeral of two Palestinian brothers Jawad and Thafer Remawi at a hospital in Ramallah in the Israeli-occupied West Bank 29 November 2022 (Reuters)
By
Leila Warah
in
Beit Rima, occupied Palestine

Tens of thousands of Palestinians marched through the villages of Kafr Ein and Beit Rima, northwest of Ramallah, on Tuesday carrying two caskets draped in bright Palestinian flags and covered in flowers.

Inside the caskets are the bodies of Jawad Rimawi, 22, and Thafer Rimawi, 21, two brothers from the town of Beit Rima.

Their bodies were carried on the shoulders of family and friends while the crowds chanted well-wishes and prayers for paradise for the new “martyrs”, who were shot dead early on Tuesday morning during an Israeli raid.

In an unusual sight for the type of funeral, crowds of mostly young women joined the procession sending glad tidings to the young men as they make their way through their hometown to their final resting place.

The unexpected death of the brothers led to a long and emotionally charged funeral. The air was filled with flags, cries of resistance against the occupation, and chants in honour of Palestine's liberation.

'With spirit and blood, we will redeem you, O Palestine'

In solidarity with those killed, masked men shot bullets in the air.

Family and friends, though, were still in shock from waking up to the news that Jawad and Thafer had been killed

"Every day, we wake up, and Jawad goes to work. Today we woke up and saw that he and his brother were dead; this is very hard to process. We are still shocked," said their uncle Bashar.

The funeral started at Birzeit University, the brothers' alma mater and highest ranking university in the occupied territories, before ending in their hometown, Beit Rima.

At the university, students walked alongside the bodies and said their goodbyes. Jawad, a recent business administration graduate, was shot in the pelvis and died on the way to the hospital. His younger brother Thafer, studying technology, was shot in the chest.

Within the sea of people, photos of the young men stood out. Jawad is smiling in his graduation gown. Thafer stares ahead with his arms crossed and the shadow of a smile. They were two of six children.

In Kafr Ein, the village neighbouring Beit Rima, where the boys were shot, the crowd of mourners was even more prominent as they surrounded the brothers' bodies, marching through the village. First to the mosque and then to their graves.

The father of the men stood by their heads and led their way, with a hand on each of them for the last time.

Israeli forces raided the Palestinian town Kafr Ein on Tuesday around five in the morning. The neighbouring village, Beit Rima, is more accustomed to raids conducted by Israeli forces. So their youth went down to “help” and "defend" their neighbours, locals told MEE.

With the Rimawi brothers among the youth, clashes broke out between them and the Israeli forces. According to witnesses, Palestinians threw rocks and Molotov cocktails at the soldiers, who were firing live bullets and other weapons as they invaded the neighborhood.

According to eyewitnesses, Thafer was throwing a rock towards the convoy of armoured military jeeps when a soldier shot at him from the direction of the jeeps, striking him in the chest.

As Thafer fell down on the ground, his brother Jawad, who was nearby, ran to his aid. In Jawad’s attempt to drag his brother off the street and out of harm's way, the soldiers fired at him as well, striking him in the pelvis and stomach.

“The soldiers that killed them were in a military jeep. The soldiers lives were not in danger at the time, they could have just moved away,” activist and resident of Beit Rima, Jad al-Bargouthi, 46, told Middle East Eye.

“We were shocked at how many live bullets the soldiers shot,” al-Barghouthi said. “We were even more shocked that these live bullets needlessly killed two brothers."

'My entire life, I thought Jawad and Thafer were competing for the best grades, but without me knowing, they were also competing for Palestine, seeing who could do more to set it free'

According to locals, the two brothers were evacuated in private vehicles by residents of Kafr Ein and Beit Rima. Jawad was taken to a hospital in the nearby city of Salfit, while Thafer was taken to Ramallah. Jawad succumbed to his wounds on the way to the hospital, while Thafer died shortly after arriving.

"The Israeli soldiers killed them in the middle of a Palestinian village, a Palestinian area where there is no legal reason for the soldiers to be there. They came, killed the two brothers and left," said their uncle.

After the funeral, family and friends gathered over food. They listened intently to the impassioned voice of the boys’ paternal uncle, Jawad Rimawi, young Jawad’s namesake. Rimawi was phoning in from Israeli prison, where he has been held as a political prisoner for the past 21 years.

"I want to ask Thafer and Jawad if I am the one who is late, or are you the ones that died early? Why didn't you wait until I was released? I wanted to meet you outside of this jail cell.”

After the funeral Bir Zeit University released a statement saying, "The university stresses that Palestinians will not be discouraged and will continue their resistance until they obtain their legitimate rights."

The university, which has had 28 students killed by Israeli forces over the years, called on the international community and human rights organizations to take immediate measures to “stop the absurd Israeli attacks that violate human and education rights in Palestine", 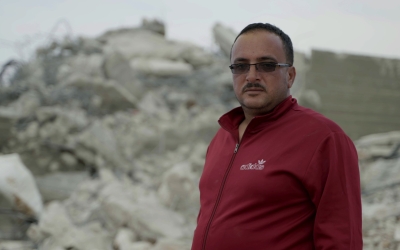 'All we could do was watch': Israeli army demolishes six family homes in occupied West Bank
Read More »

Jawad and Thafer were two of five Palestinians who were killed by Israeli forces in the span of 24 hours on Tuesday.

Mufid al-Khalil, 44, was killed during an Israeli raid in the town of Beit Ummar, north of Hebron, the same night Jawad and Thafer were killed in Ramallah.

Later on Tuesday morning, shortly before noon, a Palestinian was shot and killed after he carried out a car-ramming attack outside Ramallah, injuring one Israeli soldier. He was identified by Israeli media as Ghani Maamoun Faiz Abu Ali, 45, a married father of five.

As funeral processions were on their way in Ramallah and Hebron for the Rimawi brothers and Khalil, a fifth Palestinian was shot and killed in Al-Mughayyir village, northeast Ramallah, as Israeli forces cracked down on local protesters. He was identified as Raed Ghazi al-Naasan.

"Every day, there is a martyr. Every day there are injuries. Every night there are raids and arrests and demolitions. This is our life as Palestinians," said al-Barghouti.

The killing of the five Palestinians on Tuesday brings the death toll in the occupied Palestinian territory this year to 207 Palestinians, of whom 155 were killed in the West Bank and East Jerusalem, making it the deadliest year recorded for Palestinians since 2005.

Israel's "shoot-to-kill policy" has been widely criticised as the number of Palestinian death at the hands of Israeli forces increases.

Even Barghouti was surprised that the two brothers were shot, saying there had "been many attacks in this area, but the soldiers usually arrest the youth, not shoot them. They have never shot so many live bullets, and we think it is connected to the new orders the soldiers are getting."

Although Israel’s shoot-to-kill policy has been in place for years, many Palestinians are attributing the increase in Palestinian deaths and the lack of hesitation from soldiers to the victory of the right-wing government that recently won the elections in Israel.

Itamar Ben-Gvir and Bezalel Smotrich of the Religious Zionism party, and members of the incoming government, have made their stance on anti-Arab racism very clear in their rhetoric over the years, going as far as advocating for the deportation of citizens of Israel that are ethnically Palestinian and calling for Palestinians throwing rocks to be shot.

"They [the new Israeli government] started killing Palestinians before they sat in their new positions. But the effects of these people being in power are already being felt," said al-Barghouti, of Ben Gvir and Smotrich.

He told MEE that he believes the situation will continue to get worse.

"The Israeli government doesn't want peace with the Palestinians. Their attempts [at peace] are fake. They don't want to give us a state. The proof is that there are more illegal settlements, more martyrs and checkpoints every day." 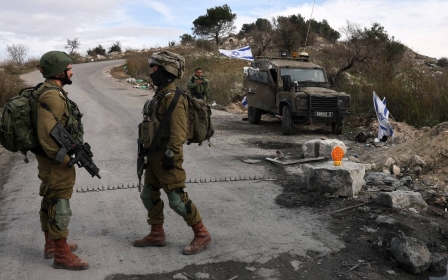 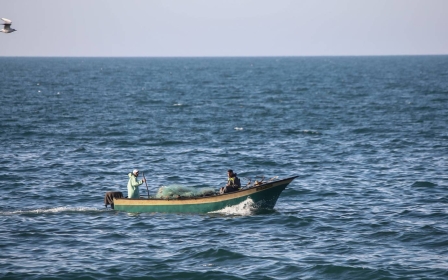