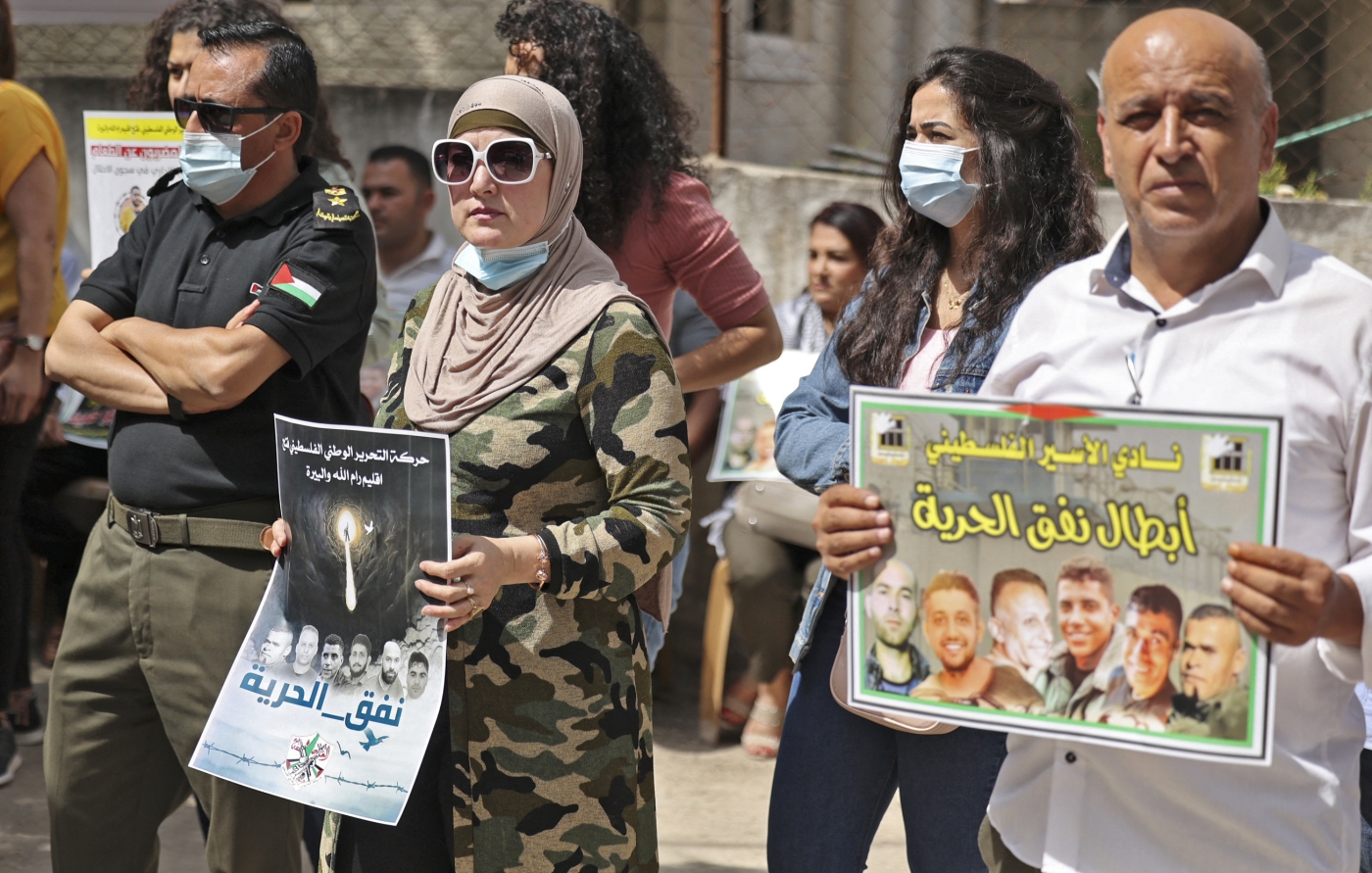 A demonstration in support of Palestinian prisoners held in Israeli prisons outside the offices of the International Committee of the Red Cross (ICRC) in Ramallah in the occupied West Bank on 14 September 2021 (AFP)
By
Shatha Hammad
in
Ramallah, occupied West Bank

Palestinian prisoners have suspended plans to hold a coordinated hunger strike after Israel agreed to halt punitive measures imposed on inmates in the aftermath of the Gilboa prison break last week.

Earlier this week, an umbrella prisoners' group had threatened to go on a collective hunger strike on Friday in response to the Israel Prison Service’s recent campaign of “repression and abuse” against Palestinian prisoners, according to the Palestine Authority's prisoners’ affairs commission.

Prisoners said the Israel Prison Service (IPS) escalated repression against the 4,650 Palestinian prisoners held in its various prisons after the escape of six prisoners from Gilboa prison on 6 September. Four of the escapees have been recaptured, while the search continues for the two who remain on the run.

Some 1,380 prisoners were set to begin the open-ended strike as part of a campaign to put pressure on the IPS until their demands were met.

The prisoners had outlined nine demands:

Qadri Abu Baker, head of the Commission of Detainees’ Affairs, told Middle East Eye that the strike announcement came in response to the repression that the prison administration had carried out against the prisoners ever since 5 September, including withdrawing the various rights the prisoners had gained from the IPS in the past.

The IPS has been escalating these repressive measures ever since 2019, deploying special units from the Israeli army and making use of new weapons against the prisoners.

“The prisoners today face an extremely dangerous situation, and we repeatedly warn against the endangerment of the lives of our prisoners and call upon all countries to intervene,” Abu Baker warned.

Palestinian prisoners rely on hunger strikes both individually and collectively to achieve concessions on rights from the prison service.

Administrative detainees have engaged in individual hunger strikes, many of which lasted more than 60 days, in order to pressure the occupation and bring an end to administrative detention without charge.

The first-ever collective hunger strike was carried out in 1969 in Ramla Prison and Kfar Yona Prison, lasting about 11 days and ending with a crackdown on prisoners, isolation, and humiliation.

During this first strike, the prisoners demanded that the quality and quantity of the food be improved and that stationary be allowed into the prison, which was coupled with their refusal to reply subserviently to the prison jailers with a “yes, sir” (hader sidi), as well as their refusal to abide by the prohibition of gatherings of more than one prisoner and their demands for more yard time. These kinds of collective hunger strikes proliferated over the years in Israeli prisons, each time making demands for the improvement of the conditions of prison life.

The hunger strike of 1976 in Askalan Prison is considered one of the more important ones, when prisoners achieved a number of demands, including allowing in stationary and taking control of the library, allowing family correspondence, the improvement of the quality and quantity of the food, and the replacement of old mattresses.

A number of Palestinian prisoners died during collective hunger strikes, especially in the Nafha Prison strike of July 1980, when the prison administration’s force-feeding of the prisoners led to the deaths of Ali Jafari and Anis Dawla, while two years later Ishaq Maragha died of the same practice in Beersheba Prison.

The last collective hunger strike took place in 2019, when prisoners demanded the reinstitution of rights withdrawn from them by the IPS, starting with a hunger strike that escalated over the course of more than 40 days.

The prisoner demands were for the improvement of conditions within the prison, the removal of jamming devices that target radios and smuggled cell phones, the installment of public landlines, an end to administrative detention, and a number of other demands. The strike ended with a number of promises from the IPS, but the demands were never implemented.

Rafat Hamdouneh, head of the Palestinian Prisoners Center for Studies, told MEE that the recent hunger strike plan came after having exhausted a number of other avenues and reaching several dead ends in prisoners' attempts to compel the IPS to meet their demands.

He added that the prisoners usually start by contacting the prison administration through “strategic messages” that clarify their demands, and in the event that these messages go unheeded, the prisoners then pursue several more strident tactics, such as banging on the prison doors and burning jail cells, eventually culminating in the hunger strike itself.

In some circumstances, the escalation of tensions may lead to the abandonment of formal representation in favor of open confrontation with the prison administration, Hamdouneh said.

Hamdouneh stated that the prisoners have several tactics at their disposal, depending on need and circumstance.

“The prisoners have announced their readiness to take the monumental step of launching a hunger strike due to the Israel Prison Service’s intransigence and violent suppression,” he added.

Hamdouneh stressed that the most successful hunger strikes that prisoners have waged were collective strikes with clear demands, but their ultimate success was also determined by external support from local Palestinian society, coupled with international pressure through embassies and other avenues, including media exposure and pressure to avoid a protracted hunger strike that would lead to the deterioration of the prisoners’ health.