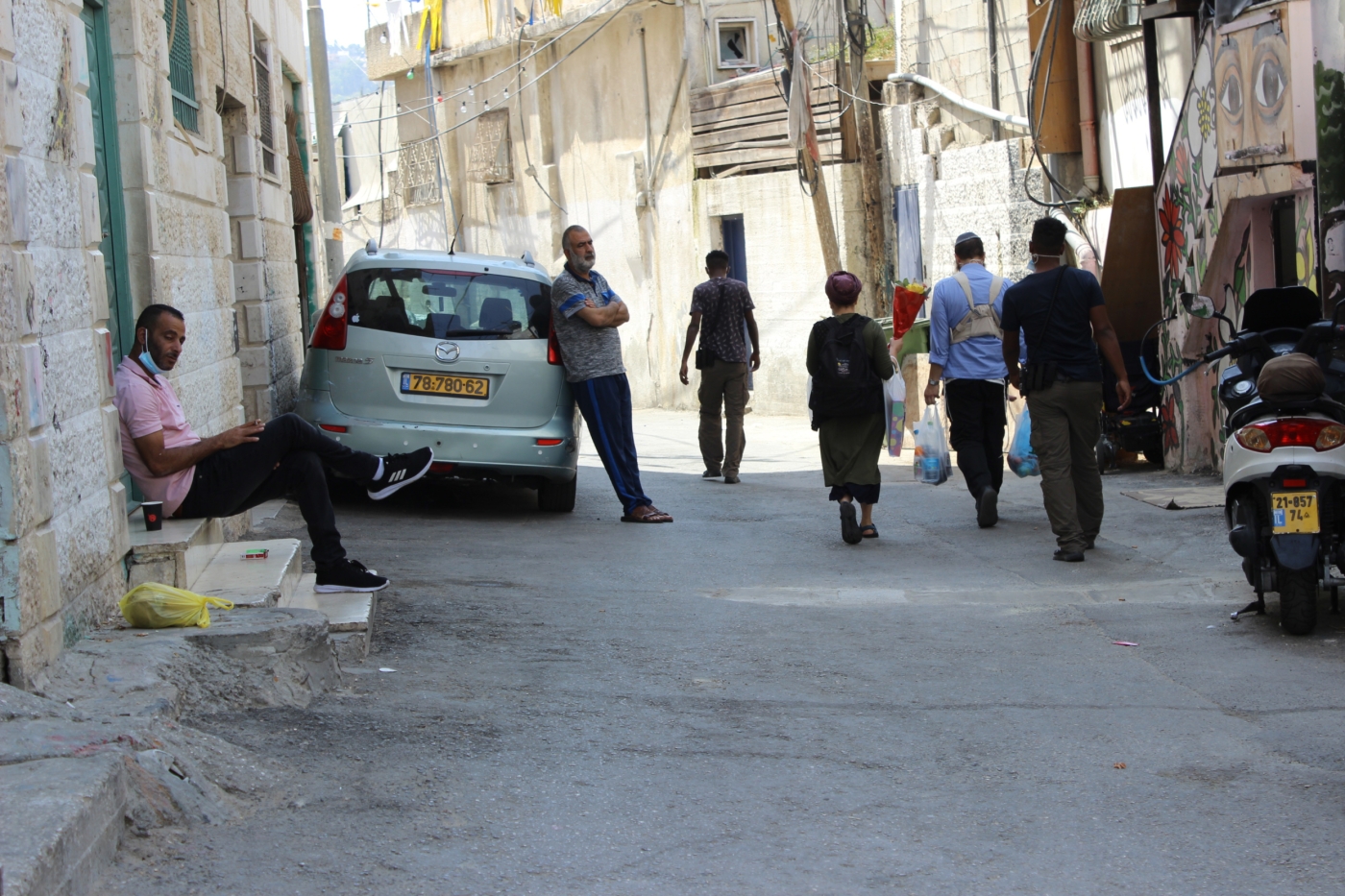 Kayed Rajabi (L) and Nasser Rajabi (C-L) watch as settlers and their guards walk by (MEE/Aseel Jundi)
By
Aseel Jundi
in
Silwan, Palestine

Reaching the Batn al-Hawa neighbourhood in the Palestinian town of Silwan in occupied Jerusalem is no easy task. One can either climb the long outdoor stairways, or arrive by car through extremely narrow roads that many non-residents find difficult to navigate. 'Who listens to the voice of the oppressed?': Palestinian family faces latest setback to save Jerusalem home
Read More »

Those who visit the neighbourhood, which lies just south of the Old City of Jerusalem, may find themselves in the midst of deep contradictions.

Climbing one of the staircases, the sound of a woman’s voice in Hebrew can be heard coming from an apartment whose walls are plastered with Arabic phrases congratulating Muslim pilgrims for their return from Hajj.

The house once bustled with the sound of its Palestinian residents, but settlers occupied it years ago. The Ateret Cohanim settler group, one of the many groups who work to evict Palestinians from their homes in Jerusalem with support from the Israeli government, has sued residents of Batn al-Hawa, claiming part of their lands belonged to Yemeni Jews before 1948.

The number of standing eviction orders issued by Israeli courts against Palestinian families has so far reached 87.

Zuhair Rajabi, head of the Batn al-Hawa local committee, told Middle East Eye that some 23 settler families are living in the neighbourhood, which is home to about 850 Palestinian residents. He explained that settler advances in Silwan began in 2004, when two outposts were established, and in 2014 the issue escalated, with the current number of outposts standing at six, ranging from apartments to entire buildings.

Israeli law works in favour of settlers by allowing only Jews to claim property they owned prior to 1948, while denying the same right to Palestinians. In Silwan, some of the families have been in their homes for up to 60 years.

Kayed Rajabi, one of those who received a recent evacuation order issued by the Israeli Magistrate Court, said that his father married in this house and had eight children. He told MEE it did not occur to him that one day he and his family, who have lived in the neighbourhood for decades, would face a lawsuit to leave his home.

The eviction order would affect 27 members of Kayed’s family, including his brother and mother. As soon as they received the order, they began preparing an appeal to submit to the Israeli Jerusalem District Court.

Kayed’s family already lives in close proximity to settlers, who took over the building next to them, making the details of their daily lives difficult and replete with tension in what is already an overcrowded space.

Settlers who live in the narrow alleyways walk flanked by Israeli guards, who often do not intervene when settlers harass the Palestinian residents, but instead partake in making life more difficult for them.

Kayed told MEE that despite the reality in which they live, they have refused all tempting offers made to them by settlers to move to a different house in another neighbourhood. "Our life beside them is extremely difficult. My home lies exactly underneath one of the settler outposts. Sometimes they leak wastewater onto my house or their children throw waste, especially dirty diapers. They also throw stones at my children while they’re playing on the roof of the house,” said Kayed.

"All this harassment has made me more attached to this place."

Living next to Kayed is the family of Umm Nasser Rajabi, a woman nearing her 70s and living with her children, who has had a long history with settler organisations.

Settlers seized the apartment adjoining their home, which they had bought from a Palestinian man from Jerusalem, only to discover later that the property had been sold to the Israelis.

One night, settlers entered the house and moved in, before gradually furnishing it following a long court process that ended with a ruling in favour of the settlers.

Umm Nasser's daughter-in-law, Nafitha, told MEE that Batn al-Hawa was "safe" before the arrival of the settlers.

"There was love and cooperation among the residents, but since the settlers came, our lives have been turned upside down," said Nafitha, who grew up in the neighbourhood, married her cousin there and had six children with him.

Nafitha said that she and her husband Nasser left Silwan due to the living conditions and moved to Beit Hanina, another neighbourhood in Jerusalem farther away from the Old City.

“There, the [Israeli] occupation demolished our house, twice, under the pretext of building without a permit,” she said. The family then lived for four years in the Kufr Aqab neighbourhood in Jerusalem, a town separated from the city by the Israeli separation wall, before eventually moving back to Silwan.

Nafitha and her husband had no choice but to restore their home, but when they began the process, Israeli guards, present in the area as protection for settlers, took photos of the reconstruction. Settlers then filed a lawsuit against them in court, claiming that their house is built on Jewish land and that Nafitha’s family does not have the rights to do as they wish with the house.

Nafitha and her husband are now facing several court cases to evict them from their home.

Sitting at the entrance of his house, Nasser's eyes wandered along its walls, and said he does not care about the eviction and is adamant that the repairs be completed despite objections by the settlers.

When asked about living among settlers, Nasser said: "It is like a life between fire and fuel, constantly burning, and there is no way you can reach the stage of coexistence."

"They came to live among us because they have state-backed procedures aimed at pressuring us psychologically and economically to leave, and we, in return, have a goal to remain here even if this costs us our lives."

Zuhair Rajabi, the head of the local committee, is in charge of following up with a team of lawyers on a large case load in the Jerusalem Magistrate and District courts. Submitting appeals and monitoring the status of the cases is very expensive.

According to Rajabi, the Palestinian families have petitioned the courts by providing proof of ownership, including documents proving they bought the lands from the Yemeni Jews in 1935.

'It is like a life between fire and fuel, constantly burning, and there is no way you can reach the stage of coexistence'
- Nasser Rajabi

“The Yemeni Jews left Batn al-Hawa before the arrival of the [Israeli] occupation,” he continued.  “Now they are fighting us, claiming that we built our homes on Yemeni Jewish lands, and they are demanding that we evacuate them."

Khalil Tufakji, director of the Maps Department at the Arab Studies Association, explained to MEE that Israel is using several laws to seize the homes of Palestinian residents in Silwan.

In this case, Tufakji said, Israel operates pursuant to a law that stipulates that all real estate owned by Jews in the city (both east and west) before 1948 must be returned to the original Jewish owners or their heirs.

Tafakji stressed the importance of asking ideological questions in dealing with this law: why does Israel forbid Palestinians from retrieving the property it seized from them in 1948?

He said the reason settler groups, backed by the government, target Silwan and have infiltrated it, is due to the town’s proximity to the Old City and its religious and historic importance, which has given Israel’s process of seizing homes in this area an ideological aspect.