Boy hit in chest during clashes in al-Ram, north of Jerusalem, according to report by Palestinian health ministry A 12-year-old Palestinian has died after being shot by a rubber bullet during clashes with Israeli soldiers, according to the Palestinian health ministry.

Maan, a Palestinian news agency, said the boy was killed on Tuesday evening during clashes with soldiers in al-Ram, north of Jerusalem.

The child was identified by the Palestinian health ministry as Mohiyeh al-Tabakhi, who was "was killed by shots fired by occupation soldiers".

Medical sources quoted by the Palestinian news agency WAFA said the boy was hit in the chest by a rubber-coated bullet, which caused cardiac arrest.

Israeli police told AFP that tear gas grenades and sound bombs had been used against demonstrators in the area, but denied that live rounds were fired.

"After being pelted with Molotov cocktails, police used tear gas and stun grenades to disperse the protesters," police spokeswoman Luba Samri told AFP. "There was no live fire."

Video of clashes in al-Ram on Tuesday evening

The boy was pronounced dead on arrival at the Palestine Medical Centre.

Al-Ram, in the occupied West Bank, is cut off from Jerusalem by the "separation wall" built by Israel.

According to Maan, clashes intensified following reports of the boy's death, and Palestinian youths attacked Israeli soldiers at a base close to al-Ram.

The incident is the latest in a wave of Israeli-Palestinian violence. Since October, 217 Palestinians and 34 Israelis have been killed in attacks and clashes. Many of the Palestinians have died while carrying out or attempting to carry out attacks on Israelis, while others were shot dead during protests or were killed in Israeli air strikes on the Gaza Strip. 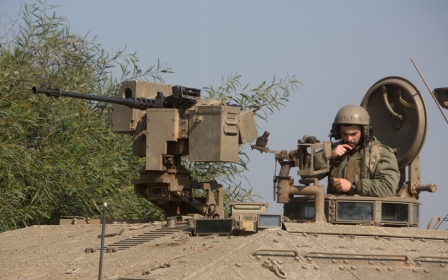