A Palestinian plain-clothed security officer hurls a projectile amid clashes with demonstrators protesting the death of Nizar Banat, in the city of Ramallah, 26 June 2021 (AFP)
By
MEE staff

The Palestinian Authority has requested to buy munitions from Israel to target protesters, as it seeks to disperse demonstrations in the occupied West Bank over the death of activist Nizar Banat.

Banat, 43, a parliamentary candidate and prominent activist, died last week in the custody of the PA security forces, who his family accused of killing him.

The Israeli news site Ynet reported on Tuesday that the PA, headed by President Mahmoud Abbas, made a "rare" request to Israeli authorities to buy "non-lethal" munitions and replenish its stockpiles of gas canisters and stun grenades.

Israel's security establishment needs to approve a limited quantity of the equipment before the inventory is transferred to the PA in the West Bank, said the report.

Ynet said that officials in the PA were anticipating widespread protests in other cities and towns in the West Bank and that they had already used part of their stock to disperse protestors in Ramallah last week. The PA is planning to send the munitions to other cities in the West Bank so security forces will be prepared to tackle demonstrations, which are expected to ignite after the PA makes public the investigation report on the death of Banat on Friday.

Banat's death at the hands of PA security forces sent shock waves across Palestinian society, and brought mass demonstrations onto the streets, calling for accountability and for the right of free speech.

Ynet said that Israel had an interest in maintaining PA stability in the West Bank, which contributes to the general security of the illegal Israeli settlements in the occupied territories.

Banat's family said that an investigation into his death was not needed, adding that "we know who killed him. These are officials in the [Palestinian] Authority."

Stephane Dujarric, the spokesman for the UN secretary-general, said on Tuesday that he was concerned about PA repression of the Palestinians.

"I think we have all seen the images coming out of the West Bank. I think the conduct of the Palestinian security forces is concerning," Dujarric said.

He added: "We have our human rights colleagues on the ground who witnessed both Palestinian security forces and non-uniformed persons using force against protesters, as well as journalists and human rights officers, who are themselves documenting the event."

Dujarric also called on PA officials to protect “freedom of expression, freedom of opinion, and peaceful assembly," adding that "any excessive use of force is investigated and prosecuted in accordance with the law." 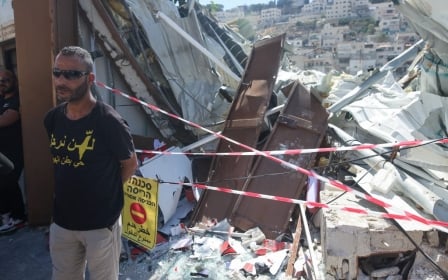