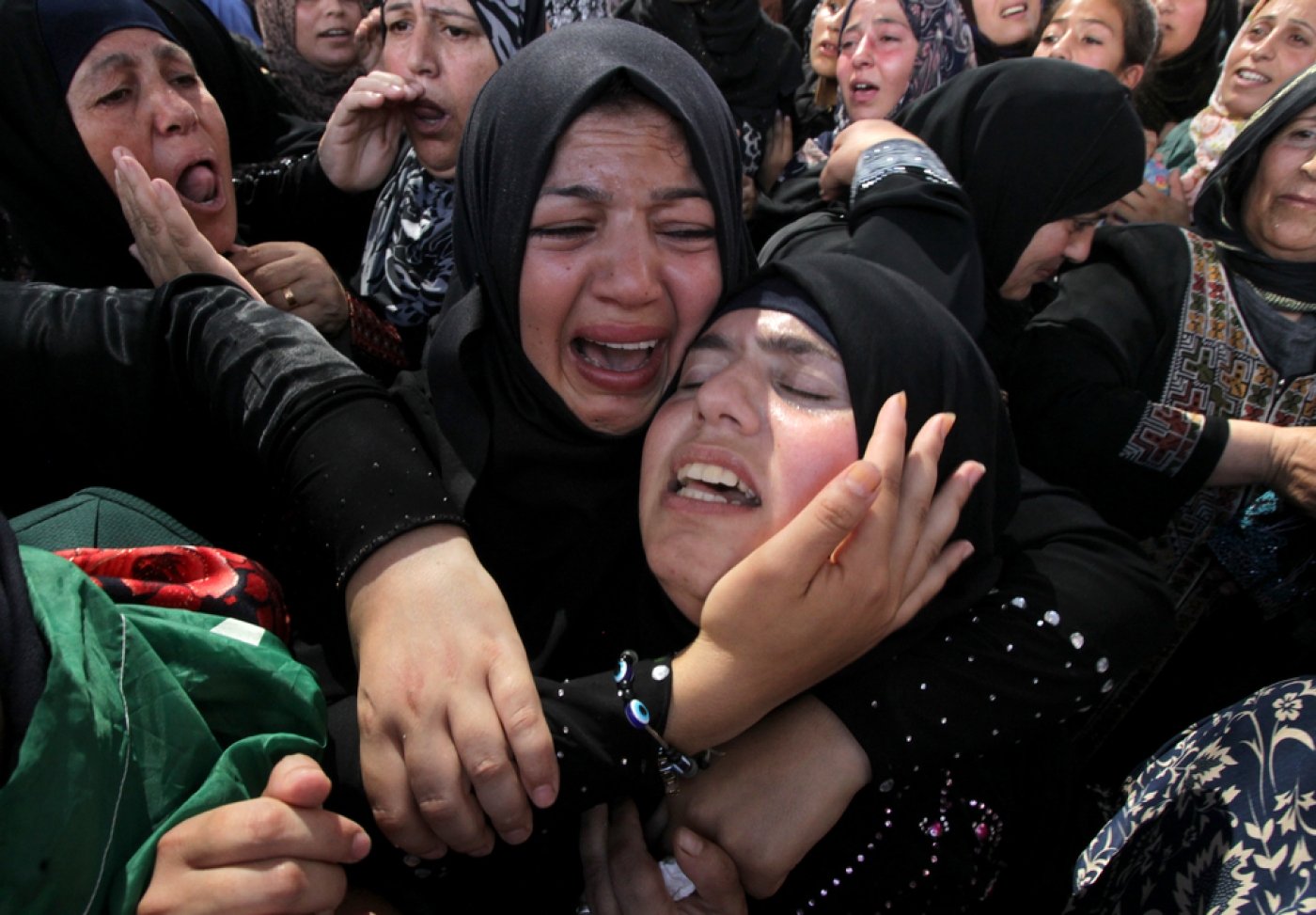 A wive of Udai al-Masalmeh, a Palestinian man who was shot dead after stabbing an Israeli soldier (AFP)
By
Sheren Khalel

BETHLEHEM, West Bank - On Monday, Israeli forces shot dead a 24-year-old Palestinian woman who was attempting to carry out a knife attack at a checkpoint in the northern occupied West Bank city of Qalqilya.

According to Israeli media outlet Ynet the woman was carrying a note which stated "I'm doing this with a clear head. I can't bear what I see and I can't suffer anymore."

During the first attack of the day, Israeli forces shot dead a young Palestinian man who had allegedly rammed his car into three Israelis standing at a bus stop near an Israeli West Bank settlement considered illegal under international law.

Another Palestinian woman was shot and critically injured after attempting to stab an Israeli security guard at the entrance to another settlement in the south of the West Bank, and another Israeli was stabbed and injured near a Palestinian village in the north of the West Bank. Israeli forces are investigating the last incident, but no suspect has been identified.

Later on Sunday, a 19-year-old Israeli police officer succumbed to his wounds after being run over by a Palestinian attacker in the southern West Bank district of Hebron a week previously, Ma’an News reported.

At least 77 Palestinians have been killed by Israeli forces since the start of October, more than half of which were killed after during alleged or attempted stabbing attacks. International rights groups have criticised Israel’s so-called heavy-handed approach, with several groups calling on the state to end its practice of “extrajudicial killings.”

During the same time period, in addition to Palestinian attacks on Israeli military, police and civilians, Palestinians and Israeli forces have clashed in daily battles throughout the occupied territories.

Hussam Zomblot, a senior policy advisor to the Palestinian President Mahmoud Abbas told Middle East Eye that he does not see the clashes de-escalating anytime soon.

“These daily clashes are an intense popular engagement with the occupation that are increasing, not decreasing,” Zomblot said. “Which is much more important for us, we need a mass movement and we need the full involvement of the society at large in these mass protests.”

Ayman, a PFLP supporter from the West Bank, is a youth active in the West Bank clashes, which generally consist of Palestinian youth throwing rocks and Molotov cocktails at fully armed Israeli forces who respond with large amounts of tear gas, live and rubber-coated bullets and other “crowd dispersal” methods.

During a protest around three weeks ago, Ayman was shot and injured in his ankle with a rubber-coated steel bullet that fractured his leg in two places, but that has not deterred him from taking to the streets with his peers.

“The last thing I would consider is to stop protesting because I was injured,” Ayman told MEE. “They can shoot me with a real bullet, they can hurt me again and again, but that won’t stop me and it won’t stop any of us. This won’t be finished easy, as long as my peers and I are capable of going to the streets we will continue.”

While Ayman fully supports the clashes as part of a Palestinian resistance movement, he is hesitant to support or condemn the solo attacks against Israelis.

“What’s happening from the stabbing and the car attacks, it’s coming from how the [Israeli] occupation government is pushing the Palestinian people, people who do those attacks know they will be killed, and no one would do that for no reason,” Ayman said. “I don’t support killings on either side, but I need to take my freedom and my rights - all of us need our freedom that is all any of this is about.”

Tensions began heating up throughout August and into September, as Israeli authorities began imposing restrictions on Palestinian entrance to the Al Aqsa Mosque compound and allowing right-wing Israelis more access to the religious site.

For Muslims, the Al Aqsa Mosque is considered the third holiest site in Islam, and a point of national importance for Palestinians. Jews consider the site the holiest place in Judaism, and refer to the area as the Temple Mount.