Mahmoud Abbas, the Palestinian president, is to sue Britain over its 1917 Balfour declaration that is said to have contributed to the eventual establishment of Israel in 1948.

His foreign minister, Riad Malki, announced the plan on Monday at the opening of the Arab League summit being held in the Mauritanian capital Nouakchott.

Malki spoke on behalf of Abbas, who is not attending as he is mourning the death of his brother last week.

Malki said the Balfour declaration “gave people who don’t belong there (what was at the time Palestine)something that wasn’t theirs”.

The Balfour declaration was signed on 2 November 1917 by the then British foreign secretary, Arthur Balfour.

His letter to Walter Rothschild, a prominent member of the British Jewish community, said Britain viewed “with favour the establishment in Palestine of a national home for the Jewish people and [Britain] would use their best endeavours to facilitate the achievement of this object”.

The declaration laid a foundation stone for the establishment of Israel in 1948 after the end of the Second World War – and in the wake of the Holocaust in which Nazi Germany murdered more than six million Jews.

Despite the declaration stating “nothing shall be done which may prejudice the civil and religious rights of existing non-Jewish communities in Palestine,” the support provided by Britain for the establishment of Israel has long been a source of grievance for Palestinians.

From Balfour to the Nakba

Speaking at the Arab League summit, Malki said the declaration ultimately led to the Nakba – an Arabic word meaning catastrophe which is used by Palestinians to describe their mass displacement and murder by Jewish forces during the war establishing Israel as a state in 1948.

Malki said the lawsuit against Britain would be filed in an international court – but the Palestinian prime minister did not provide any further details on how the case will proceed.

“Palestinian leaders haven’t been interested in peace for some time already,” he said, according to the Israeli newspaper, Haaretz.

“The only goal is to delegitimise Israel. Don’t be surprised if the next phase will be an expansion of the Palestinian claim against Britain, and France as well since they were also partners in the Sykes-Picot agreement that divided control in our region.”

Britain has not responded to Abbas's plan to sue.

In Nouakchott, Malki warned against Arab countries working with Israel, arguing that such action would amount to normalisation of ties with Israel without Palestinian leaders having realised their goal of establishing an independent state.

Despite Saudi Arabia and Israel having no official relations the two tacitly worked together last year in lobbying the US not to sign a deal ending sanctions against Iran in return for the Iranians significantly reducing their nuclear programme.

Balfour
The Balfour Declaration: Enduring colonial criminality
Susan Abulhawa
Balfour
Palestinians to the UK government: 'Ask us for forgiveness'
Balfour
Before the Nakba: Images show Palestine then and now 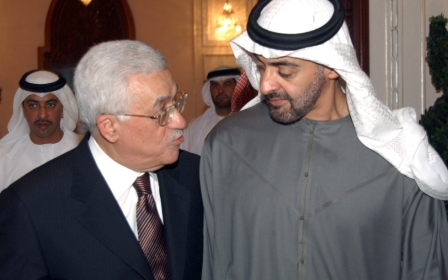