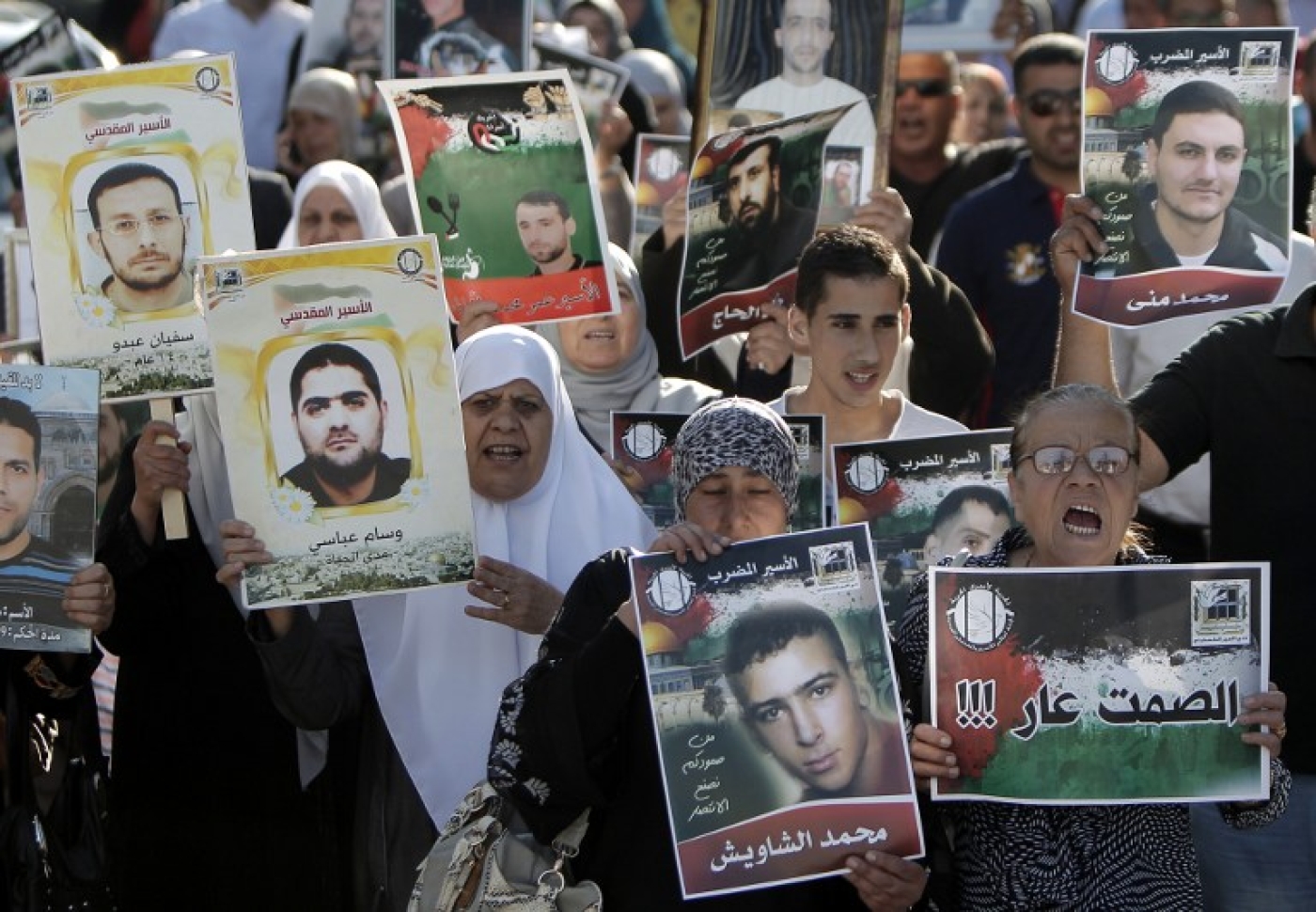 Palestinian prisoners participating in the longest mass hunger strike in Palestinian history have rejected a settlement proposed by the Israeli prison and intelligence services, incarcerated members of a Palestinian party tell MEE.

An estimated 300 prisoners are participating in the strike which started on 24 April to protest against administrative detentions by Israeli forces. On Tuesday, the strikers entered their 48th day, passing a record set in a 1976 strike, according to human rights associations.

Thirteen strikers have suffered internal bleeding and two had undergone surgery, according to the Palestinian Prisoner's Club.

The strike gained renewed attention last week when the world's largest international security corporation, G4S, announced that it would ends its contracts with Israeli prisons within three years.  The next day, the Bill and Melinda Gates Foundation, which had been targeted by protesters worldwide during this year's Palestinian Prisoner's Day for its shares of G4S, told Bloomberg it had liquidated its holdings in the company.

‘Not a serious offer’

In their rejected offer, Israeli intelligence and prison services had proposed to reduce the period for which they could hold administrative detainees without charge or trial to a single six-month term, according to the prison branch of the Popular Front for the Liberation of Palestine.

Israeli prison authorities also reportedly warned strike leaders that they do not “care much about the death of any striking prisoner,” according to a Palestinian Prisoner's Club statement.

Israel’s administrative detention law allows its military commanders to order the imprisonment of Palestinian residents of the West Bank for six-month terms which can be renewed indefinitely, without specifying charges or giving detainees trials.

The Israeli prison service currently holds 191 Palestinians under the law, according to the Palestinian Prisoners' Club.

In their statement, the prisoners said the same terms had been offered and refused during the Karameh (“Dignity”) hunger strike two years ago.

“One officer, called Beaton, is the intelligence officer mediating between the intelligence service and the Palestinian detainees,” said Allam al-Kaabi, a PFLP central committee member responsible for prisoners’ affairs.

Al-Kaabi knows the prison system well. As a condition of his release in its 2011 prisoner exchange with Hamas, al-Kaabi, once a resident of the Balata refugee camp by Nablus in the West Bank, was forced to relocate to the Gaza Strip by Israel. When he left the prison for Gaza, he had completed eight years of nine life sentences ordered by an Israeli military court after his capture in 2003.

“Beaton told the prisoners that administrative detention is a political issue. He was not entitled to solve it. This had to be done at the higher levels of the Israeli government.”

“Of course they refused that,” al-Kaabi said. He added that the encounter was “the first official meeting” between Israeli officials and the strike leadership, which he called “a positive step.”

The offer followed a similar one made to hunger strikers in Negev prison ten days ago, said Osama al-Wuhaidi, a spokesman for the Hussam Association, a prisoners’ society and family support group in Gaza.

“They offered to end their detentions individually, imprisoning them only for their current six-month terms,” he said. “After that, it would not be extended and the detainees would be released.”

The roughly 50 prisoners on hunger strike in the prison refused the offer, holding that all administrative detentions should be ended. They also said the offer should have gone through the strike leadership.

“It was not a serious offer,” Wuhaidi said. “They were trying to manipulate the prisoners to end the hunger strike, then renege on their agreement.”

Last week, United Nations Secretary General Ban Ki-moon and a special UN human rights committee released statements of concern over the hunger strike, with Ban calling for Israel to charge administrative detainees with recognized crimes or “release them without delay.”

The statements came after threats by the Israeli government to force-feed hunger strikers.

A government proposal in the Israeli Knesset to authorise the practice met condemnation from the Israeli Medical Association, whose spokeswoman, Ziva Miral, told the Associated Press, "It goes against the DNA of the doctors to force treatment on a patient."

"Force-feeding is torture, and we can't have doctors participating in torture," she added.

A 28 May “consensus conference” by the IMA concluded, “In accordance with generally accepted ethical principles in Israel and abroad, forced medical treatment, including force-feeding is forbidden.”

Despite opposition from Israel’s physicians, its parliament is likely to pass the force-feeding bill, Ola Shtiwi, advocacy and intervention coordinator in the prisoners and detainees project of Physicians for Human Rights – Israel (PHR-I), told the Middle East Eye.

“The medical community is against it,” she said. “But maybe they will find someone to do it.”

The IMA is large and influential, Shtiwi said, but many physicians employed by the Israeli prison service do not belong to it, and are thus immune to sanctions, such as expulsion, that it could apply.

“It cannot punish them,” she said. “The ministry of health can, but it is behind this bill.”

PHR-I has often visited past hunger strikers to offer independent medical care. Their access to the current ones has been barred by the Israeli prison service and ministry of health, Shtiwi added.

“We’re trying to get final answers,” she said. “If we don’t get approval within a few days, we will approach the courts.”

Shtiwi estimated that 75 hunger strikers were currently hospitalized, but warned, “The number changes all the time. They take people from the prisons to the hospitals, and back again.”

If the Knesset, which accepted the bill on its first reading on Monday, ultimately passes it, the detainees have decided not to resist force-feeding, al-Kaabi, the PFLP official responsible for prisoners’ affairs, said.

On Monday, strikers in Israel's Kaplan prison told Addameer attorneys that doctors had already threatened to force-feed them if they lost consciousness.

‘You are our only hope’

“Our great Palestinian nation, defenders of justice all over the world, organizations struggling for Palestinian rights, all governments and free media outlets: you are our only hope," the statement, written on 26 May, said.

On Monday, strike leaders released another statement emphasizing their determination to continue.

“The nurses, who are supposed to be angels of mercy, come into our rooms with food to break our spirits, but we will not give up until we accomplish our goal, and we are willing to die for it,” they wrote to the Palestinian Prisoners’ Club. “Each one of us has already written his will, and we have sworn that there is no way back.”

Mother and wives of the strikers urged the US Congress last week, in a letter released by Addameer, to force Israel to respect international humanitarian and human rights law.

“Your vital role is crucially needed, in ending the policy of administrative detention forever, as this abusive and unlawful practice severely affects the administrative detainees and their families, especially their children,” they wrote.

Israeli government officials told Middle East Eye that administrative detention orders against detainees who pose a danger to public security in the West Bank are “recognized by international law and [are] in full conformity with Article 78 of the Fourth Geneva Convention 194.”

“Moreover, local legislation governing the process grants all relevant individuals the right to appeal the order to a Justice of the Military Court of Appeals, for judicial review,” they said.

Administrative detainees and their attorneys hold that the process is not transparent. Instead, they say each administrative detention order is based on what Addameer calls "a secret file", denied to defendants and their counsel.

As the strike nears its 50th day, its supporters have welcomed new victories for a campaign launched two years ago to back Palestinian prisoners.

On 17 April 2012 – Palestinian Prisoners’ Day, as well as the start of the month-long Karameh strike – Addameer, the Boycott, Divestment and Sanctions (BDS) movement, and a coalition of Palestinian organizations called “for action to be taken to hold to account G4S, the world's largest international security corporation, which helps to maintain and profit from Israel’s prison system , for its complicity with Israeli violations of international law.”

On Thursday, a day after what the Guardian called “violent” removal of protesters from the G4S’ annual meeting in London by its guards, chief executive officer Ashley Almanza announced that the company would end its contracts with Israeli prisons within three years.

"We expect them to expire and we don’t expect to renew them,” he told the Financial Times.

Following the company’s Thursday announcement and the disclosure by The Bill and Melinda Gates Foundation of its liquidation of G4S shares, the Palestine Solidarity Campaign said in a statement, “G4S has suffered intense reputational damage, and it will continue to be targeted until it ends its complicity with Israeli crimes.”

Demonstrations in support of the strikers continue to escalate in the Gaza Strip and West Bank. On Sunday, a commercial strike closed much of downtown Ramallah, while daily protests, including a permanent encampment outside the International Committee of the Red Cross, persist in Gaza.

“They are in the prisons without any reason,” said Jamal el-Khoudary, a Palestinian Legislative Council member and chairman of the Popular Committee against the Siege, which held a candlelight vigil in Gaza for the prisoners. “Only Israel decides, against all international law. We urge the world to pressure Israel to set the prisoners free.”