The Palestinian women standing up against Israeli incursions at Al-Aqsa 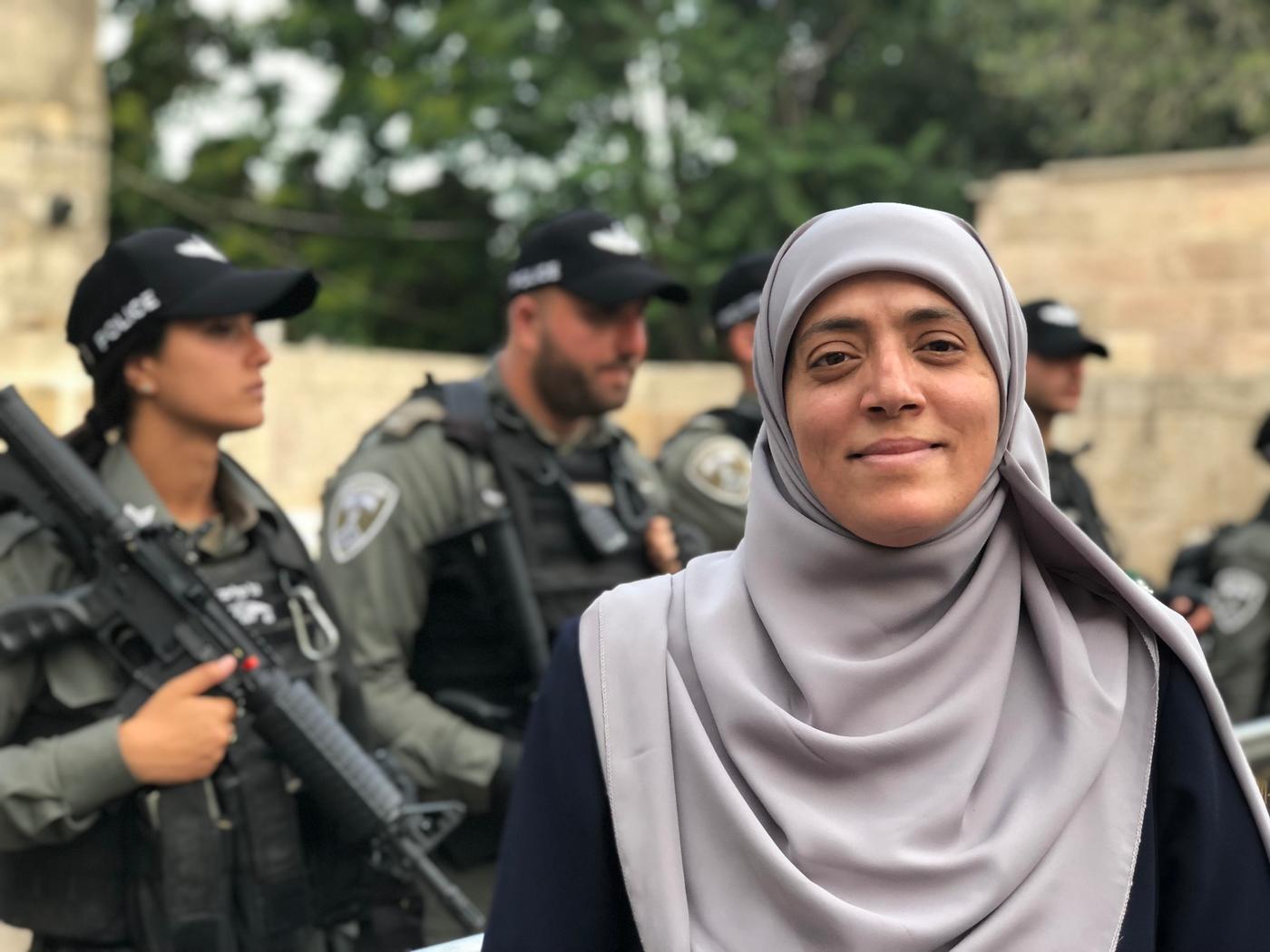 Hanadi Halawani’s home lies just a few metres away from Al-Aqsa Mosque in the Old City of Jerusalem. Yet, for the past few months, the 39-year-old has not been able to step foot into the holy mosque.

Halawani is one of several Palestinian women who have been repeatedly barred from entering the al-Aqsa Mosque compound by Israeli authorities for her political activism.

Israeli authorities have consistently slapped Halawani and Khadija Khweiss, a 42-year-old political activist, with temporary expulsion orders over the years. Their case has managed to draw attention through their activism both in the media sphere and on the ground.

The religiously observant pair spent the holy month of Ramadan away from the Al-Aqsa, prevented from even approaching it. They decided to bring food and break their fast at the closest possible point in the vicinity and called on others who were also barred from entering to join them.

Since the two have been systematically targeted by Israeli authorities, they have garnered much sympathy among Palestinian Jerusalemites and have become icons giving voice to those who have faced a similar injustice.

Halawani told Middle East Eye she can “no longer count the number of temporary expulsion orders she has received”; she has not been able to enter the Al-Aqsa Mosque compound during Ramadan or religious holidays. Her last expulsion order lasted a whole year.

Israeli authorities allege that Khweiss’s presence at the mosque compound constitutes a “security threat”. During Israeli settler raids on the compound’s premises, Khweiss would peacefully protest by chanting against their presence.

She and Halawani have been accused in Israeli courts of incitement on social media due to their posts calling for solidarity with the cause of Jerusalem and Al-Aqsa and rejection of Israeli policies of expelling, killing and imprisoning Palestinians.

During their trials, Khweiss and Halawani’s charge sheets included “disturbing public order”, “belonging to a banned organisation”, and “incitement”.

The two women have rejected such charges, saying they are invalid and are used solely by the Israeli occupation to suppress their activism and banish them from the mosque to provide full protection to Israeli settlers raiding the compound.

According to an agreement between Israeli authorities and Jordan - which is the custodian of Al-Aqsa - Jewish worship is now allowed on the premises of the mosque compound. However, a growing far-right movement has been calling for Israel to take control of Al-Aqsa, arguing that it is in fact a holy Jewish site.

Khweiss and Halawani have resorted to various methods to reject and resist their expulsion orders. They set up camp at the entrance to the mosque compound during Ramadan, praying there and serving home-cooked dishes of traditional Palestinian food such as stuffed vine leaves and courgettes.

Those who regularly frequent the mosque know that during Ramadan, Halawani could be found on a near-daily basis at an entrance to the al-Aqsa Mosque compound alongside Khweiss, her partner in exile.

Yet, even while merely sitting at the entrance to the compound, Israeli soldiers surround them, trying to irritate them. The soldiers would eat seeds and throw the husks towards the two women. When they performed their prayers, the soldiers would begin to sing and laugh loudly over the sound of the adhan - or call to prayer.

The pair have received many invitations to give talks abroad and advocate for the cause of Jerusalem and al-Aqsa in Arab and Muslim-majority countries. They have tens of thousands of followers on their social media accounts, where they regularly post about the holy city and the mosque.

'We will teach you a lesson and humiliate you'

But their peaceful activism has come at a cost: the Israeli occupation has filled their path with obstacles by imposing on them a general travel ban, cutting off access to health and national insurance for them and their families, and subjecting them to physical and verbal harassment while arresting them during protests against settler raids.

During her many arrests, Halawani recalls that Israeli authorities tried to humiliate her by rummaging through her undergarments and throwing them on the floor while searching her home. She said that during her interrogations, officers verbally abused her, using obscene language she preferred not to repeat.

“We will teach you a lesson and humiliate you,” she remembered an Israeli officer saying to her the last time she was arrested.

Halawani says she was blindfolded and her hands were cuffed behind her back at a police station when another officer said: “We will throw water and food to you like you’re a dog.” Such threats, she said, were not uncommon to her. A few years back, she said officers threatened to send her into exile out of Jerusalem altogether, to Gaza or Turkey.

Israel has long used temporary bans against Palestinian Jerusalemites as punishment. The practice goes as far back as 1967, when it occupied East Jerusalem, where the Old City is located.

Expulsion orders render Palestinians unable to access their workplaces, schools or universities, homes and even their hometowns, particularly Jerusalem, for extended periods of time.

Khaled Zabarqa, a lawyer specialising in Jerusalem affairs, told MEE that temporary bans violate basic principles of international law such as freedom to worship and freedom of movement.

“It is about displacing Palestinian Jerusalemites from the city, and aims to alter the demographic balance” in favour of Israelis, he said.

The Israeli government has publicly stated that it has policies in place to ensure a Jewish majority in Jerusalem.

Statistics on the number of Palestinians that have received temporary expulsion orders are not accessible. Yet, presently more than 20 men and women from Jerusalem and from present-day Israel are currently barred from entering the al-Aqsa Mosque Compound for varying periods.

Many Palestinians who participated in protests against the closure of Rahma Gate in February were given temporary bans from the city and the mosque at the time.

The order generally states that the individual is barred from entering al-Aqsa Mosque for a period of time, ranging from a matter of days, to a year. The period is arbitrarily determined by an Israeli officer and the orders are issued for the most part without a court ruling.

In many cases, temporary expulsion orders encompass a ban from the entire city of Jerusalem, or the Old City which houses the al-Aqsa Mosque compound, or the alleys leading to the latter. They are issued only to Palestinians from Jerusalem or those still residing in areas now part of modern-day Israel. Those who breach the order face incarceration and/or a hefty fine.

Over the past few years, hundreds of Palestinians have been slapped with temporary expulsion orders of varying time periods ranging from days to months, with some individuals receiving multiple orders.

Excluding religious holidays and the elderly, the more than three million Palestinians in the occupied West Bank are already barred from accessing the city by an eight-metre high concrete wall and manned checkpoints. They can only enter with a military permit that is difficult to obtain and has a time limit - sometimes a matter of hours.

Despite all that she went through at the hands of the Israeli occupation, Khweiss says that the attempts to discourage her are the least of her worries.

What keeps her up at night, she continues, is Israel’s success at emptying the Al-Aqsa compound of Muslim worshippers and implementing plans to Judaise the space. She describes the mosque as an orphan that she has adopted as one of her children, cleaning its wounds and amplifying its voice.

Israel’s control of East Jerusalem, including the Old City, violates several principles under international law, which stipulates that an occupying power has no sovereignty in the territory it occupies and cannot make any permanent changes there.

Among Palestinians, particularly Jerusalemites, fears are rampant of an Israeli scheme to divide the Al-Aqsa Mosque between Muslims and Jews, similar to how the Ibrahimi Mosque in Hebron was divided in the 1990s.

Jewish Israelis believe that the Al-Aqsa Mosque compound stands atop where the Second Temple once stood, and some far-right Israeli activists have called for the destruction of the Al-Aqsa compound to make way for a Third Jewish Temple.

In 1990, an Israeli group known as the “Temple Mount Faithful” attempted to place a cornerstone for the Third Jewish Temple in the compound. Israeli forces responded with live fire to quell confrontations and protests by Palestinians, killing more than 20 and wounding at least 150.

Later on, the Israeli government authorised the opening of a tunnel to the Western Wall, under the foundations of the Al-Aqsa compound, and continues to sponsor archaeological digs in the vicinity of the mosque operated by Jewish settler groups.

A series of events since Israel wrested control of East Jerusalem has placed Palestinians on edge over the fate of the mosque compound. It has provided a drive for activists such as Halawani and Khweiss to draw attention to the cause in an effort to prevent Israel from changing the status quo, particularly with the provocative daily raids by settlers flanked by soldiers and police.

Under the pretext of security, Israel uses the Defence (Emergency) Regulations enacted by the British occupation of Palestine in 1945 to quell dissent to its rule before pulling out in 1948.

Following the occupation of the Palestinian territories in 1967, Israel re-enforced the regulations, using them to punish Palestinians, and continues to use them to this day, claiming it was the local law prior to occupation.

Khaled Abu Arafeh, who was elected in 2006 to the Palestinian Legislative Council (PLC) on the Hamas Change and Reform List, and who served as minister of Jerusalem affairs, has been banned from entering Jerusalem since his election. Abu Arafeh, among other Palestinian parliamentarians, was ordered to leave his home and family in East Jerusalem and to move to the West Bank.

He explained that expulsion orders are aimed at “emptying Jerusalem of Palestinians” by forcing them to leave or disrupting their lives.

“Banning Palestinians from Al-Aqsa is merely to make way for Israel to continue Judaising Jerusalem,” he told MEE.