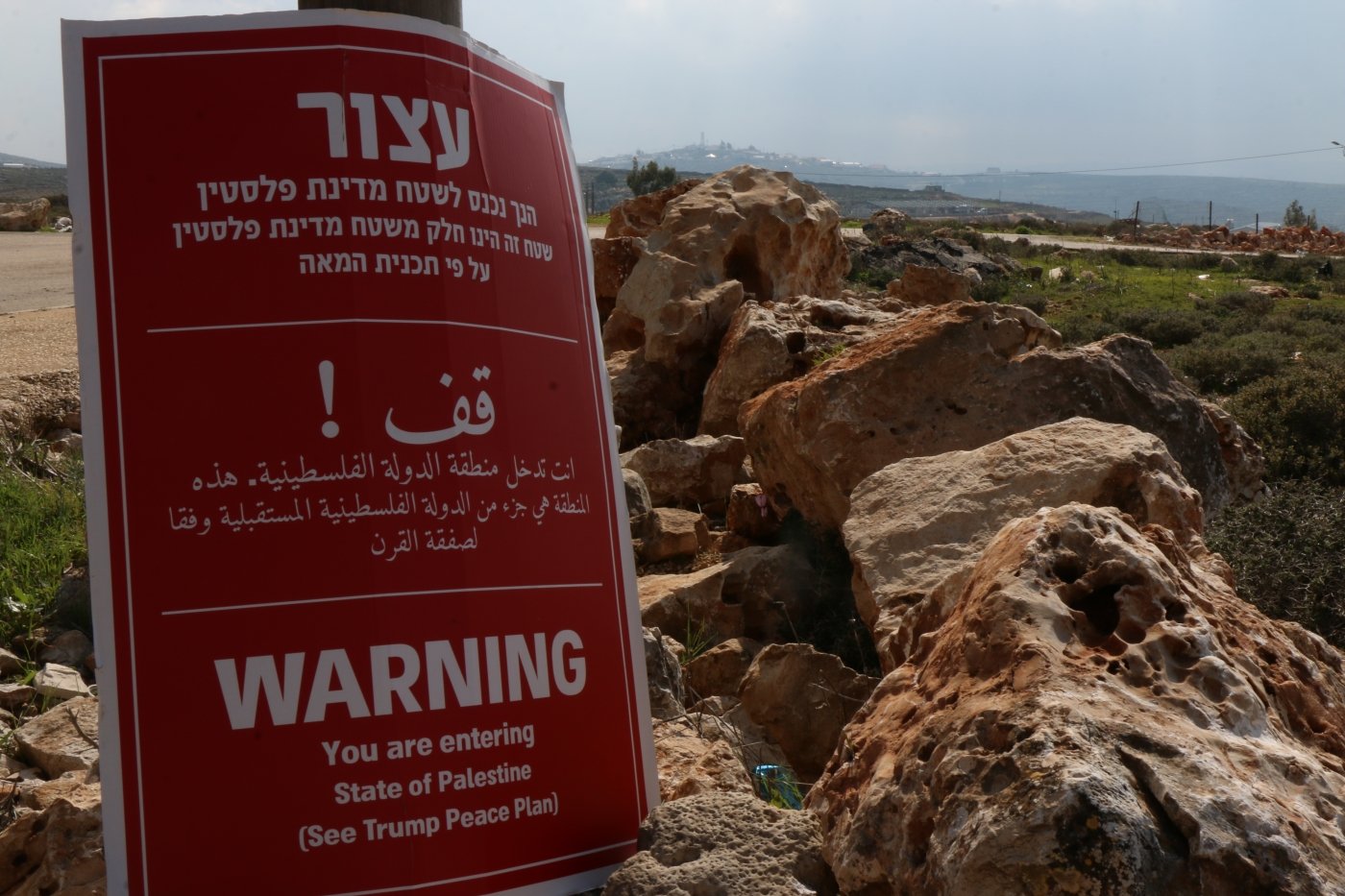 New unofficial red signs were placed at 33 entry points into Palestinian controlled territories by a settler group opposed to the creation of a Palestinian state in any form (MEE/Akram al-Waara)
By
Akram Al-Waara
in
Qusra, occupied West Bank

One of the most common sights across the occupied West Bank are giant red billboards sitting at the entrance of every Palestinian town, village, and city, warning Israelis not to enter Area A, under the jurisdiction of the Palestinian Authority (PA) as it is "forbidden, dangerous to your lives and is against the Israeli law".

But when Palestinians woke up on Tuesday, they were shocked to find new red posters plastered at the entrances to 33 villages in the West Bank - from Nablus and Jenin in the north, all the way south to Hebron.

In the same familiar red and white, warning signs written in Hebrew, Arabic, and English, read:

The 'peace plan' referred to in the sign is the much-maligned proposal by US President Donald Trump - which has been categorically rejected by Palestinian leadership.

In the village of Qusra, south of Nablus, the villagers found the sign posted at the main entrance off the highway, an area settlers from the neighbouring Migdalim settlement also pass to reach their homes.

“At first, people were really scared, we thought it was the Israeli government who put up the signs,” Abed al-Athim Wadi, a 47-year-old local activist, told Middle East Eye from a hilltop on the outskirts of the village.

“We thought they had already begun implementing Trump’s peace plan,” he said, adding that the villagers immediately tore the posters down in protest.

But after a few phone calls to neighbouring villages and some investigation on social media, Wadi and other activists realised that the signs were posted as a political statement by right-wing Israeli settler organisation Regavim. Notorious for its advocacy against Palestinian self-determination and the two-state solution, Regavim wanted to make a statement: the existence of any future Palestinian state would be a threat to their vision of Israeli annexation of the entire West Bank.

By posting signs at future proposed border points with the Palestinian state, they were alerting settlers to the “dangers they will face” at “33 points that Jewish residents will no longer be able to access, 33 points from which acts of terrorism will be unpreventable”.

For Regavim, the Trump plan  - which proposes a discontinuous and demilitarised Palestinian “state” with little sovereignty and surrounded by settlements fully annexed by Israel - is inadequate.

Instead, the group says that it will be the settlements themselves - which are illegal under international law - that will “become isolated enclaves, completely surrounded by the newly established [Palestinian] state”.

“If the Palestinian Authority decides that it wants a state and the next American president decides that they’ve met the requirements, the next morning the 'deal of the century' will go into effect - and the border of Palestine will be right outside the gates of Judea and Samaria’s Jewish communities,” the group said in a statement - using the Israeli term for the West Bank.

“The red alerts in southern Israel over the past few days illustrate what it’s like to live next door to a terrorist state.”

The new signs were posted just a week before Israel heads into its third consecutive round of elections in the past year, and were meant to send a message to Israeli Prime Minister Benjamin Netanyahu: a significant voice in his right-wing settler base was not happy with the US peace plan in its current form.

As he has done in the past election cycles, Netanyahu has used political promises - like annexation of settlements and the entire Jordan Valley - in order to curry favour with his settler base.

For many critics, it was clear that his warm reception of Trump’s peace plan, released just two months before the new elections, was an attempt to do the same the third time around.

But to Netanyahu’s surprise, organisations like Regavim are pushing back hard at the prospect of accepting a plan that concedes any bit of West Bank land to Palestinians.

The signs were just the first part of an anti-peace plan campaign launched by the organisation.

On Thursday, the group rolled out a new phone application that allows users to measure the proximity of their homes to the proposed borders of the future Palestinian state under Trump’s plan.

While acknowledging the “unprecedented opportunity” provided by the US plan, which recognises Israeli sovereignty over the majority of the West Bank, the group says the plan also “contains an unprecedented threat to the safety of Israelis and to the future of the State of Israel: Recognition of a Palestinian state in the heart of the Land of Israel.”

“We urge you to...join us in our call to the Knesset and the government: Sovereignty - yes! A Palestinian state - absolutely not!” the group said on Thursday.

Middle East Eye was unable to reach Regavim for comment.

Rizqallah Abu Rideh, 53, a friend of Wadi’s and a fellow activist, said he wasn’t convinced that the campaign by Regavim would have a negative impact on Netanyahu’s newest bid for prime minister.

“Don’t be fooled, Netanyahu doesn’t want to give any of this land to Palestinians either,” Abu Rideh said. “That’s not his plan.”

“The only reason he agreed to the US plan in its current form is to save face in front of the international community. But they don’t want to nor plan on giving any land to the Palestinians.”

'It's been the goal of the settlers to take every inch of Palestinian land, nothing less'

After realising the true nature of the posters, Wadi told MEE that he and other villagers had mixed emotions.

“On one hand, we were in disbelief at the irony of the situation,” he said. “Trump has given everything the settlers and Netanyahu could want with this plan, and still, they are not happy.”

“But when you think about that, it makes sense. From the beginning of the Zionist project, it has been the goal of the settlers to take every inch of Palestinian land, nothing less,” he said.

Wadi believes that the signs were meant to serve as a message not just to the Israeli right, but to Palestinians as well.

“They are trying to tell us that this land belongs to them, and they won’t stop until they ensure we don’t have any rights or land left,” he said.

“There is going to come to a point where there might be another Nakba,” Wadi continued, referring to the mass displacement of Palestinians in the wake of the creation of the state of Israel in 1948.

“This shows that no matter what, they won’t be happy with a single Palestinian living on this land. But we will never let this happen. Trump’s plan is another Balfour declaration, but we won’t make the same mistakes again.”

Israel-UAE deal
UAE and Palestine at odds over future of Israel normalisation accords
Palestine State
“In My Heart, I am a Palestinian”: Football legend and longtime supporter of the Palestinian cause Diego Maradona passes away at the age of 60.
Palestine State
What did the PA gain for resuming security coordination with Israel?