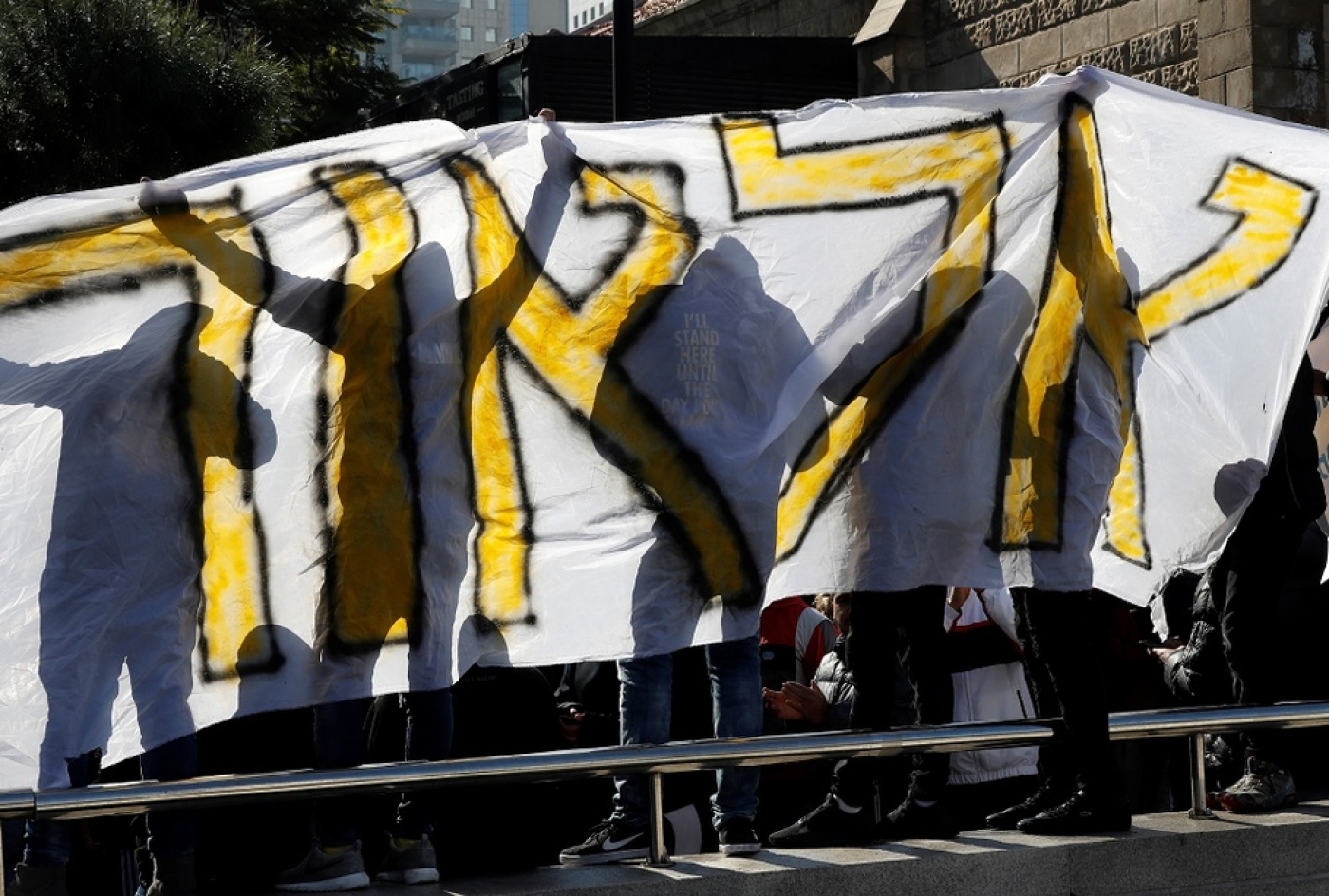 Israelis in Tel Aviv with a poster bearing the name of Israeli soldier Elor Azaria in Hebrew on 4 January, 2017 (AFP)
By
Jonathan Cook

They say the increasingly hostile political climate in Israel is stoking violence from the police and street gangs and has laid the ground for a recent raft of legislative proposals many Palestinians consider racist.

The alert comes as a group of Palestinian lawyers demand that Israel's attorney general investigates Gilad Erdan, the internal security minister, for alleged incitement to racism.

Adalah, a legal group for Israel's Palestinian minority, highlighted statements from Erdan blaming Palestinian citizens for "arson terrorism" last November after forest fires swept the country, despite their having been no prosecutions.

"Israel has experienced arson terrorism, and I won't let anyone sweep this fact under the rug," he wrote on Facebook in December. "Why does it seem unrealistic that Arabs would attempt to harm Jews?"

Adalah alleged Erdan's comments were part of a wider government strategy to portray Palestinian citizens, about 20 percent of Israel's population, as a "fifth column".

Although other government ministers had incited, the group claimed, Erdan's statements were especially harmful because of his role overseeing the police.

Adalah said he was bolstering a police culture that already treated Palestinian citizens as an "enemy within".

"Incitement from Erdan is dangerous because it reinforces and sanctions existing prejudices in the police," Nadeem Shehadeh, a lawyer with Adalah, told Middle East Eye.

"As a result, the police are likely to have an even lighter finger on the trigger."

Concern about the effects of incitement from leading politicians has been underscored by a survey published this month that found rocketing levels of online abuse from Israeli Jews against Palestinians.

7amleh, an organisation promoting social media rights for Palestinians, identified 675,000 posts in Hebrew last year expressing racism or hatred towards Palestinians – one every 46 seconds, and more than double the previous year's figure. 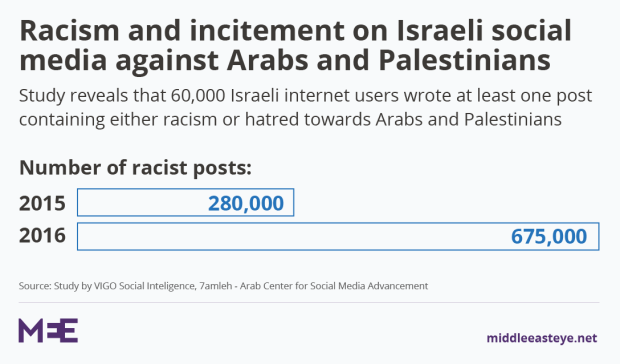 "There are terrifying levels of hate speech online from Israeli Jews," Nadim Nashif, 7amleh's director, told MEE. "No one in Israel – politicians, the police, the courts and the social media companies – has shown any interest in doing something about it.

"But it's worse than that. The politicians are fuelling the problem. It has become completely normal in Israel to incite against Palestinians. You find it everywhere. It is entirely mainstream."

The research identified more than 50,000 Hebrew speakers as persistent offenders on social media, especially Facebook, said Nashif. Spikes in online abuse correlated with incitement from Israeli politicians and the media, he added.

Both Adalah and 7amleh said incitement from Israeli Jews was rarely investigated or prosecuted. Palestinians in Israel and the occupied territories, on the other hand, had their accounts closed or were arrested and jailed over less serious online activity.

7amleh said its research showed that the brunt of online abuse was directed at leading Palestinian politicians in Israel.

The most common targets were Haneen Zoabi, one of only two Palestinian women in the parliament, and Ahmad Tibi, a former adviser to the late Palestinian leader Yasser Arafat, 7amleh said. Both Zoabi and Tibi have reported regular death threats.

According to the survey, those studied received more online abuse than the leader of the Palestinian Authority in the West Bank, Mahmoud Abbas.

"When we are targeted rather than the Palestinian leadership in the occupied territories, a clear message is sent to the [Jewish] public that we have no place in the parliament and those we represent have no right to be citizens," Zoabi told MEE. 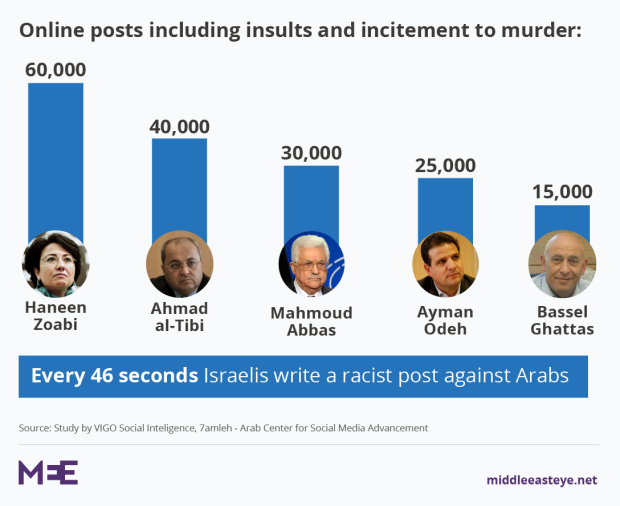 The climate of incitement has had very concrete effects, said Zoabi: "It gives a green light to police violence. It is converted into shootings and deaths."

She said dozens of Palestinian citizens had died in unexplained circumstances at the hands of the police in the past 15 years.

Zoabi also pointed to the increasing reports of gangs chanting "Death to the Arabs!" in Israeli cities and Jerusalem, as well as a growing incidence of street assaults.

Polls have shown high levels of racial prejudice among Israeli Jews. A survey last year found 49 percent would not live in the same building as a Palestinian citizen.

Another showed a similar number of 16 and 17-year-olds would deny Palestinian citizens the right to vote.

Adalah said constant incitement from government politicians had made possible the drafting of ever-more discriminatory and anti-democratic legislation.

Shehadeh noted that recent laws allowed the parliament to expel the minority's legislators over their views, and hampered the work of human rights groups assisting Palestinians.

Zoabi agreed. "Every week we see bills being introduced, such as a ban on the mosque call to prayer, or moves to step up home demolitions in Palestinian communities. The political culture sanctions ever more violence through legislation."

Nashif said a turning point in the levels of incitement could be traced to comments by Israel's prime minister, Benjamin Netanyahu, at the last general election, in early 2015. Netanyahu posted a video on Facebook telling the Jewish public it was vital they voted because "Arab voters are coming out in droves to the polls".

"When the prime minister talks like this, then everyone else understands that it is okay to do it too," Nashif said.

7amleh's survey showed a significant peak of online incitement and hate speech last November, as hundreds of fires broke out across Israel and the occupied territories, triggered by a prolonged drought and high winds.

Despite the exceptional weather conditions, Erdan led government ministers in accusing Palestinians, especially those in Israel, of being behind the fires.

Adalah cited Erdan's Facebook post from early December. Dozens of Palestinian citizens were arrested by police, but none have been charged with "nationalist crimes" over the fires.

Nevertheless, Netanyahu has continued to make similar accusations, stating last month: "That fact that we can't prove it [that the fires were terrorism] doesn't mean it's not what happened." 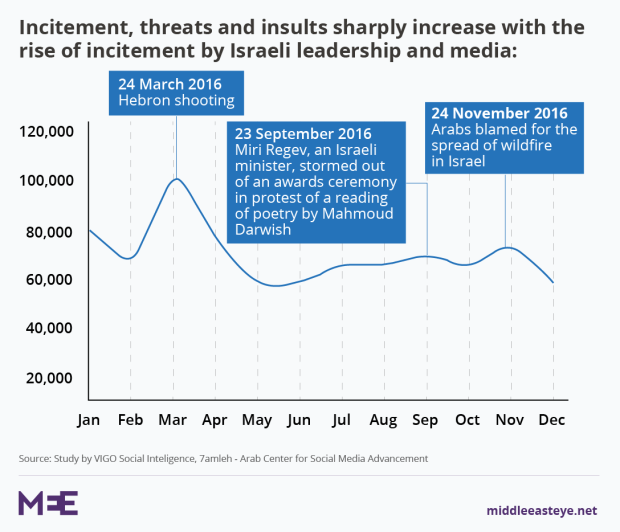 Nashif said: "These inciteful statements garner a lot of media attention and our research shows they have a powerful impact in shaping public attitudes. But few notice when they turn out to be based on lies or misinformation."

A police video and post-mortem examination report indicated that Abu al-Qiyan lost control of his car after he was shot, and careered into a group of policemen, killing one of them.

According to Israeli media, a justice ministry report – due to published next month – has found no evidence that Abu al-Qiyan carried out an attack or belonged to an extremist organisation.

Nonetheless, said Shehadeh, Erdan and other government ministers repeatedly accused Abu al-Qiyan, without evidence, of being an Islamic State terrorist.

Erdan tweeted hours after the two deaths: "The terrorist sharply turned his wheel and quickly accelerated in order to run over a group of police officers."

Netanyahu's office similarly described the incident as a "car-ramming attack". Implying that Abu al-Qiyan was part of global trend of Islamic terrorism, Netanyahu said Israel and the world were "fighting this murderous phenomenon".

Adalah's letter to the attorney general also pointed out that Erdan had repeatedly blamed the deaths in Umm al-Hiran on Palestinian legislators there to protest against the demolitions. Erdan singled out Ayman Odeh, the leader of the Joint List, the Palestinian coalition in the parliament.

In comments to the media, he said: "Ayman Odeh and the rest of the MKs from the Arab [sic] List who have come to enflame sentiments this morning: this blood is also on your hands. … You are a disgrace to the state of Israel."

In Umm al-Hiran, Odeh was himself injured twice, including to the head, by sponge-tipped bullets fired at him by police.

Nashif criticised Facebook, where most of the online hate speech was found, for contributing to the problem.

Last summer Facebook agreed to crack down on what Israel defines as incitement by Palestinians. Paradoxically, Erdan was the minister who met the tech companies.

According to reports, in the first half of 2016, a tenth of all content restrictions imposed by Facebook globally were at the Israeli government's behest.

But Nashif said nothing was being done to deal with incitement and hate speech from the Jewish public.

"It is not reasonable that large numbers of Palestinians have their accounts shut down or are arrested and jailed for online hate speech, while Israeli Jews can engage in the same or worse activity and there are no consequences," he said.

Neither the justice or police ministries were available for comment.

7amleh said the biggest peak in online abuse followed the arrest last March of army medic Elor Azaria. He was filmed executing a badly wounded Palestinian, Abdel Fattah al-Sharif. This week he was sentenced to 18 months for manslaughter.

She described the late national poet Mahmoud Darwish as the "leader of the Palestinian industry of lies", and accused a popular rapper, Tamer Nafar, of giving "legitimacy to terrorism".