PA declares national day of mourning after at least 16 people killed and more than 1,400 reported wounded by Israeli security forces 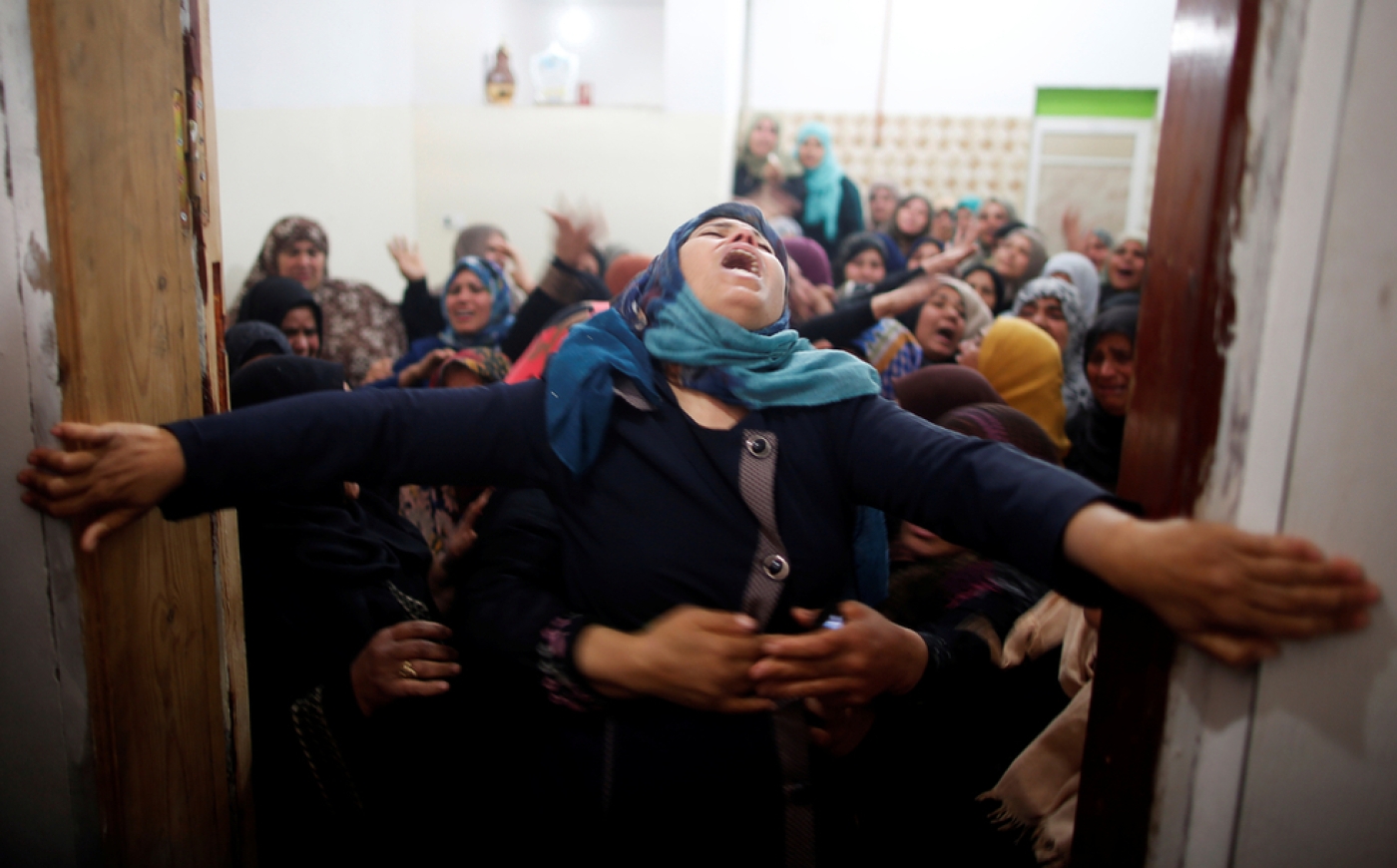 Dozens of Palestinian youths gathered along the Gaza-Israel border on Saturday, though the area remained mostly quiet, a day after deadly violence broke out in one of the biggest Palestinian demonstrations there in years.

In the southern Gaza Strip, residents said Israeli troops fired warning shots towards a crowd of youths, some of whom burnt tyres. Health officials said 13 people were wounded and an Israeli military spokesman said he was checking the details.

Hundreds also gathered on Saturday in Northern Gaza to pay their respects to at least 16 Palestinians killed and hundreds wounded during Friday's violence.

Images posted online showed hundreds of mourners carrying caskets of some of the slain Palestinians through the streets of Gaza City as relatives were pictured weeping and crying for their loved ones.

After burying 19-year-old Abdul Fattah Abdul Nabi, his family gathered in a tent to receive mourners, watching and rewatching a video of the moment they say Israeli soldiers shot him in the back of the head, the Washington Post reported.

The video appears to show Abdul Fattah, dressed in black, running away from Gaza’s border fence with Israel carrying a tyre, the Post said. Just before reaching the crowd, he crumples under gunfire.

“He had no gun, no Molotov, a tyre. Does that harm the Israelis, a tyre?” asked his brother Mohamed Abdul Nabi, 22. “He wasn’t going toward the Israeli side. He was running away.”

Israeli security forces killed at least 16 Palestinians and injured more than 1,400 people who had mobilised as part of Friday's annual Land Day protests, according to the Palestinian Ministry of Health.

The ministry also noted that at least 773 Palestinians were wounded with live ammunition.

Dr Ashraf al-Qidra, a spokesperson for the ministry, said that "most of the dead were aged between 17 and 35".

He also told the Guardian that the remainder of the wounded, some of whom were in a critical condition, had been "shot with live ammunition".

The Israeli army was unable to confirm how many live rounds were fired by its snipers after claiming to know where "every bullet landed in Gaza".

Israeli military tweeted earlier "we know where every bullet landed" in Gaza. Reporters asked repeatedly how many live rounds were fired + how many people were hit but a spokesman said they didn't have figures.

Mark Regev, Israel's ambassador to the UK, defended Israel's response on Saturday, saying it was proportionate and blaming Hamas, which controls Gaza, for Friday's violence.

"We can’t allow our border to be porous, we can’t allow the Hamas activists to tear down our fence and enter Israel," Regev told the BBC. "We would be putting our people in danger."

Hamas confirmed in a statement on Saturday that five of the 16 people killed by Israel on the Gaza border were members of its armed wing.

Palestinian President Mahmoud Abbas declared Saturday a national day of mourning, and a general strike was called across the occupied West Bank. Clashes were also reported in the West Bank city of Hebron between Palestinian protesters and Israeli soldiers.

In New York, United Nations Secretary-General Antonio Guterres called for an "independent and transparent investigation into these incidents".

“This tragedy underlines the urgency of revitalizing the peace process aiming at creating the conditions for a return to meaningful negotiations for a peaceful solution that will allow Palestinians and Israelis to live side by side peacefully and in security,” Guterres' office said in a statement.

In Brussels, the European Union's foreign policy chief Federica Mogherini also called for "an independent and transparent investigation" into Israeli security forces' use of live ammunition.

Jeremy Corbyn, the leader of the UK's opposition Labour Party, condemned Israel and said in a tweet that the "killing and wounding by Israeli forces of civilians demonstrating for Palestinian rights in Gaza is appalling".

The killing and wounding by Israeli forces of civilians demonstrating for Palestinian rights in Gaza is appalling.

The UK Government must make its voice heard on the urgency of a genuine settlement for peace and justice.

Tens of thousands of Palestinians had gathered on Friday along the fenced 65km frontier, where tents were raised for a planned six-week protest pressing for a right of return for refugees and their descendants to what is now Israel. The Israeli military estimate was 30,000.

Families brought their children to the encampments just a few hundred metres from the Israeli security barrier with the Hamas-run enclave. Football pitches were marked out in the sand and scout bands played.

But as Friday wore on, Israeli soldiers on the other side kept watch from dirt mound embankments and shot at the protesters as violence broke out.

The Palestinian ambassador to the UN, Riyad Mansour, described Friday's violence as a "heinous massacre". He said that Palestinians expected the UN Security Council to "defuse this volatile situation" and to "shoulder its responsibility".

A senior UN official also told the Security Council on Friday that the situation in Gaza "might deteriorate in the coming days" and called for civilians to not be targeted.

The six-week protest is scheduled to culminate on 15 May, the day Palestinians commemorate what they call the Nakba (Catastrophe), when hundreds of thousands fled or were driven out of their homes in 1948 when the state of Israel was created.

Israel has long ruled out any right of return, fearing an influx of Arabs that would wipe out its Jewish majority. It argues that refugees should resettle in a future state the Palestinians seek in the Israeli-occupied West Bank and Gaza. Peace talks to that end have been frozen since 2014.

Abbas's spokesman, Nabil Abu Rdainah, said: "The message of the Palestinian people is clear. The Palestinian land will always belong to its legitimate owners and the occupation will be removed."

Israeli military spokesman Brigadier-General Ronen Manelis said Hamas was using the protests as a guise to launch attacks against Israel and ignite the area. He said violence would likely continue along the border until 15 May.

"We won't let this turn into a ping-pong zone where they perpetrate a terrorist act and we respond with pinpoint action. If this continues we will not have no choice but to respond inside the Gaza Strip," Manelis told reporters in a phone briefing.