Shortages have eased, rebel attacks have reduced - and desire for change has evaporated as many in Syria's capital just want the killing to end 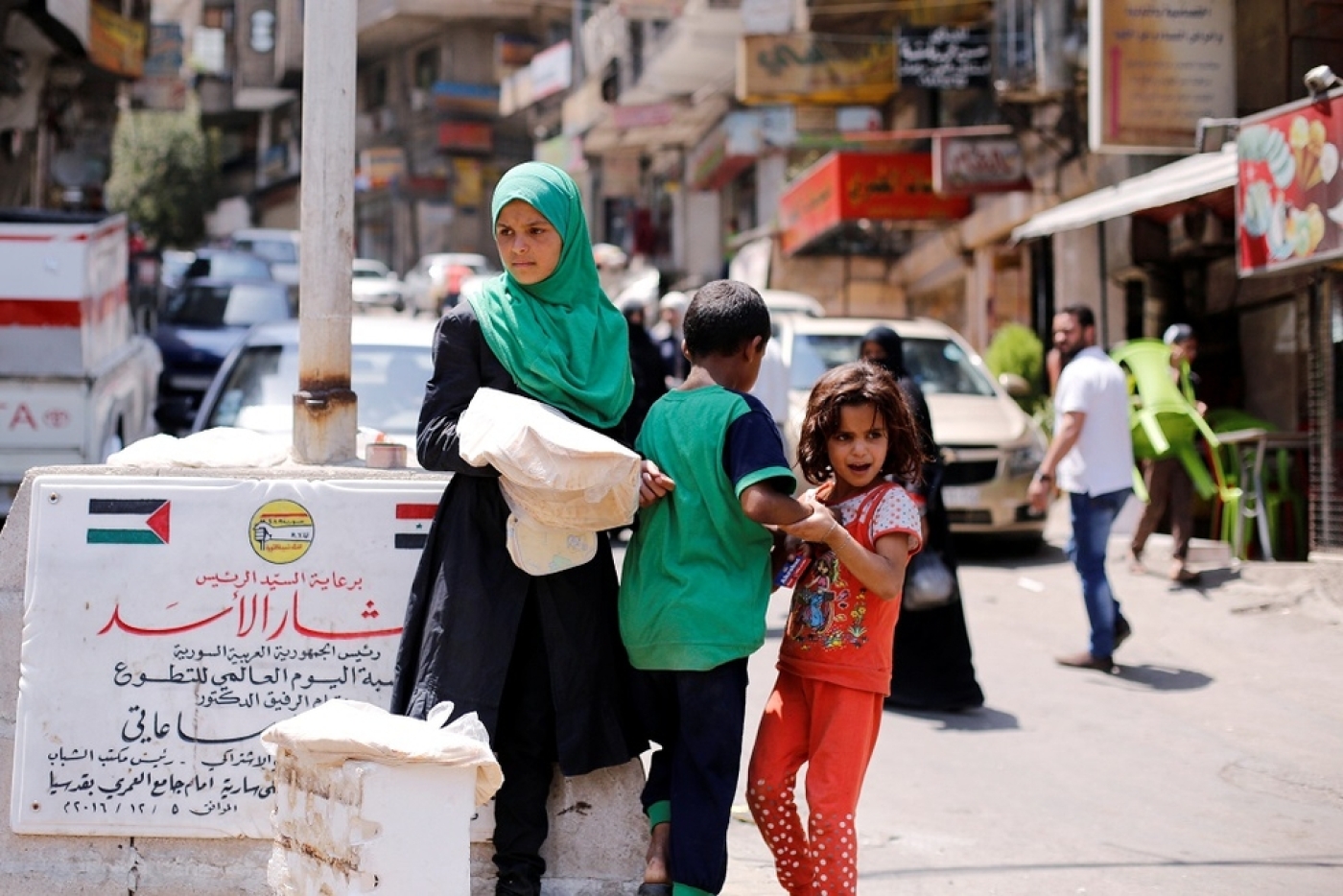 A woman buys bread in the 'pacified' district of Qudsaya, Damascus, a city slowly returning to normality, and acceptance (Reuters)
By
Jonathan Steele

DAMASCUS - The first signs that Syria’s six-year war is winding down hit you within minutes of crossing the land border from Lebanon.

A year ago there were eight checkpoints where troops scrutinised travellers' documents and searched car boots on the 30-mile trip to Damascus. Now there are only three.

Within the capital city the story is similar. Half the checkpoints have been lifted, say Damascus residents, reducing the stress of traffic jams and creating a sense of a gradual return to normality.

People just want peace for themselves and their loved ones

Residents now get 12 hours of electric power a day, a big increase on last year. Mazout, the heavy oil which is used to heat people’s homes, is more expensive than in peacetime but it is no longer in short supply as it was a year ago.

Queues for bottled gas, the staple kitchen fuel, have disappeared. Whatever people think of Bashar al-Assad and his government, the overriding feeling in the Syrian capital is one of relief that rebel mortar and car bombs have all but stopped.

Attitudes were never binary, or divided into a simple equation for or against the government. There was always a large group of Damascenes who were undecided, non-political, and mainly concerned about protecting themselves and their families.

In the early days of the conflict, when it became clear that it was becoming a proxy war manipulated by outside powers, significant groups opposed militarisation even though they wanted to reform or replace the government.

Along with relief that the war is coming to an end there’s a turning away from politics even among activists who protested in the streets six years ago.

“Two years ago I was still interested in politics. Now I don’t care," said a woman in her early thirties who moved abroad but returns regularly to visit her parents.

She preferred not to have her name published.

“Politics are a dead end. What people wanted a few years ago hasn’t worked out. The destruction has been so huge. People just want peace for themselves and their loved ones.”

Several new bars and cafes had opened in the packed streets of Damascus’s Old City, she said.

People no longer care about the country’s future. They smoke shisha and just live for the present. I feel the same

“People no longer care about the country’s future. They smoke shisha and just live for the present. I feel the same,” she added.

A young woman who works as an independent translator was more despairing about the future, though equally relieved that the war was winding down, at least for the residents of Damascus.

“The fighting may be over but hatred will remain for years. People are angry with both sides," she said.

"They blame both sides for the violence. As far as I’m concerned, the revolution was over when the first shot was fired.”

She cited the case of a 22-year-old friend, who didn’t have to join the army because he’s an only son. “In spite of this he says he hates everyone. His life is ruined,” she said.

The painter and the president

Youssef Abdelke, one of Syria’s most talented painters, still lives in Damascus though he was about to travel to Paris to exhibit some of his latest work, when I visited his cluttered Ottoman-era studio last month.

“The original revolutionaries have gone abroad or they are dead. It’s over. One must be realistic,” he said.

Convinced that in a free election Assad would be defeated if the opposition could ever unite, he is one of the few critics of the president who dares to be quoted.

The original revolutionaries have gone abroad or they are dead. It’s over. One must be realistic

This summer he painted what was for him a new subject: a series of female nudes, which he exhibited in a Damascus gallery.

Abdelke has no time for the religious opposition to Assad who, he says, have no interest in promoting democracy but he was surprised that his exhibition also provoked a furious reaction from secular opposition groups abroad.

They claimed he was giving comfort to the government. He replied in an article in a Lebanese newspaper, pointing out that he had turned down a request from the Syrian culture ministry to sponsor the exhibition and that it was held in a privately owned gallery.

The state media ignored the show but this did not stop the exiles’ attacks. He sees them as a sign of the opposition’s political bankruptcy.

“My paintings are a tribute to beauty. They are a rejection of these confessional wars. It’s a protest against all this death. Don’t they see that?” he said.

Aleppo, the turning point of the war

For Damascenes the big turning-point was the government’s recapture of rebel-held eastern Aleppo last December.

It created a domino effect, allowing the Syrian army to start moving forces to attack IS in eastern Syria and sending the militant group into retreat.

Hayat Tahrir al-Sham, linked to al-Qaeda, and other rebel groups have also lost ground or are fighting each other in Idlib province in northwest Syria.

The change has come about because of two years of Russian bombing plus the injection of Lebanese Hezbollah fighters and Iranian militias.

The claim rests partly on what control means when large sections of the country are empty desert.

Assad is not gloating, at least in public. But he sounded confident of victory in a televised speech on 20 August.

“Our army is achieving one gain after another every day to eliminate terrorists... We will continue to attack terrorists until the last terrorist on Syrian land," he said, but added that the war was by no means over.

“The battle continues, and where we go later and it becomes possible to talk about victory... that's a different matter.”

Indeed, September was the bloodiest month of war this year, according to the Syrian Observatory for Human Rights, which said 3,055 people were killed.

The media has traditionally focused on high civilian casualties, but not the number of battlefield deaths. The war monitor's statistics show that civilians account for about a third of casualties - 955 civilians, including 207 children.

But the figures also show the majority of deaths were men with guns - the toll to the opposition was 1,288, comprising 550 Syrians and 738 foreign fighters.

A total of 790 government soldiers, militiamen and Hezbollah fighters were killed.

Even in Damascus the war is not yet over. It is only reduced.

A string of rebel-held districts around the capital have been pacified by so-called reconciliation agreements, including Barzeh, Daraya, Moadimimiya and Qudsaya, but Joubar and part of Yarmouk, the Palestinian refugee camp, are still in opposition hands.

Virtually every night around midnight I could hear from the Christian quarter of the Old City what sounded like a series of huge doors slamming in the distance.

Tanks and artillery parked inside the stadium in Abbassiyyin square were pounding Joubar less than a mile away.

Mortar bombs sometimes fly back in return - one killed a medical student in the street just outside the city wall the day before I left Damascus.

But the main remnants of the war are confined to four areas: the southern front around Daraa; sections of Hama province where rebels control part of the main road to Aleppo; sections of the Euphrates valley east of Deir Ezzor and Raqqa; and the Idlib region on Turkey’s border.

Russia’s president, Vladimir Putin, has done Assad a favour not just by using the Russian air force and sending hundreds of special forces and military police to Syria.

He has created a military negotiating forum, known as the Astana process, in which Russia, Iran and Turkey are working out “de-escalation zones” to reduce the fighting.

Originally designed to give Iran an internationally recognised role in finding a solution to the Syrian conflict, the Astana process has taken off.

The Geneva forum for political talks, by contrast, is in limbo, with the government and opposition still unwilling to sit in the same room and agree an agenda.

“I don’t think it has yielded any results so far because there’s no substance," said Bouthaina Shaaban, Assad’s political and media adviser.

"I don’t know whether it’s meant as a platform from which to announce a solution once one is found but I can’t see that it’s made any real progress.”

The focus of Astana is military. By focusing on ceasefires monitored by the three states as guarantors, Astana helps to protect Assad from attack, making it inconceivable that his regime could fall.

Two big questions hang in the air. One is what will happen to Raqqa now that the Americans and their Kurdish allies have taken control there.

Will they hand it to the Syrian army through agreement with the Russians and what will they demand in return? It is inconceivable that the Syrians and Russians will confront the Americans militarily.

The other question centres on the future of Idlib, now that hundreds of rebels from other battlefields in Syria have been relocated there after surrendering in Homs, Aleppo and the suburbs of Damascus.

The Syrian and Russian air forces have been bombing Idlib intermittently, but an all-out attack seems unlikely given the huge death toll it would inflict on Syrian ground forces.

Far more probable is that Turkey will be expected to use its political leverage to persuade the non-Islamic State and non-al-Qaeda rebels to give up and leave.

As Assad put it in August: "The idea of these de-escalation zones is to stop the bloodletting... and the eviction of the armed groups handing over their weapons and the return of normalcy. We have an interest in the success of this initiative.”

In Damascus many Syrians hope for a US-Russian agreement to end the war. Now that Assad is winning, there is a sense that the Russians are in a hurry to get it over with while the Americans are not.

In public that is the line which Syrian officials take.

“What the Americans want is to prolong the war," Shaaban told MEE.

"They spoke of it as a war of attrition. What we want is to put an end to this war and use every possible channel and means in order to stop the bloodshed in Syria.

"If the Americans wanted to stop this war they would cooperate properly with Russia in Astana and Geneva.

"We are trying to do our best to end this war because it’s our people who are paying the price." 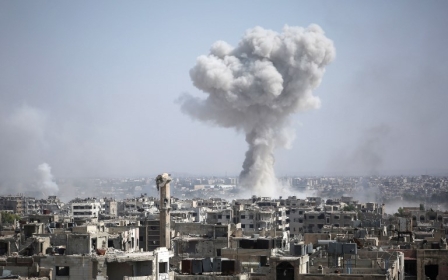