In Pictures: Death in Khuza'a as locals lash out at Red Cross

Violence continues in Gaza, as Israeli forces strike the village of Khuza'a in the South-East of Gaza 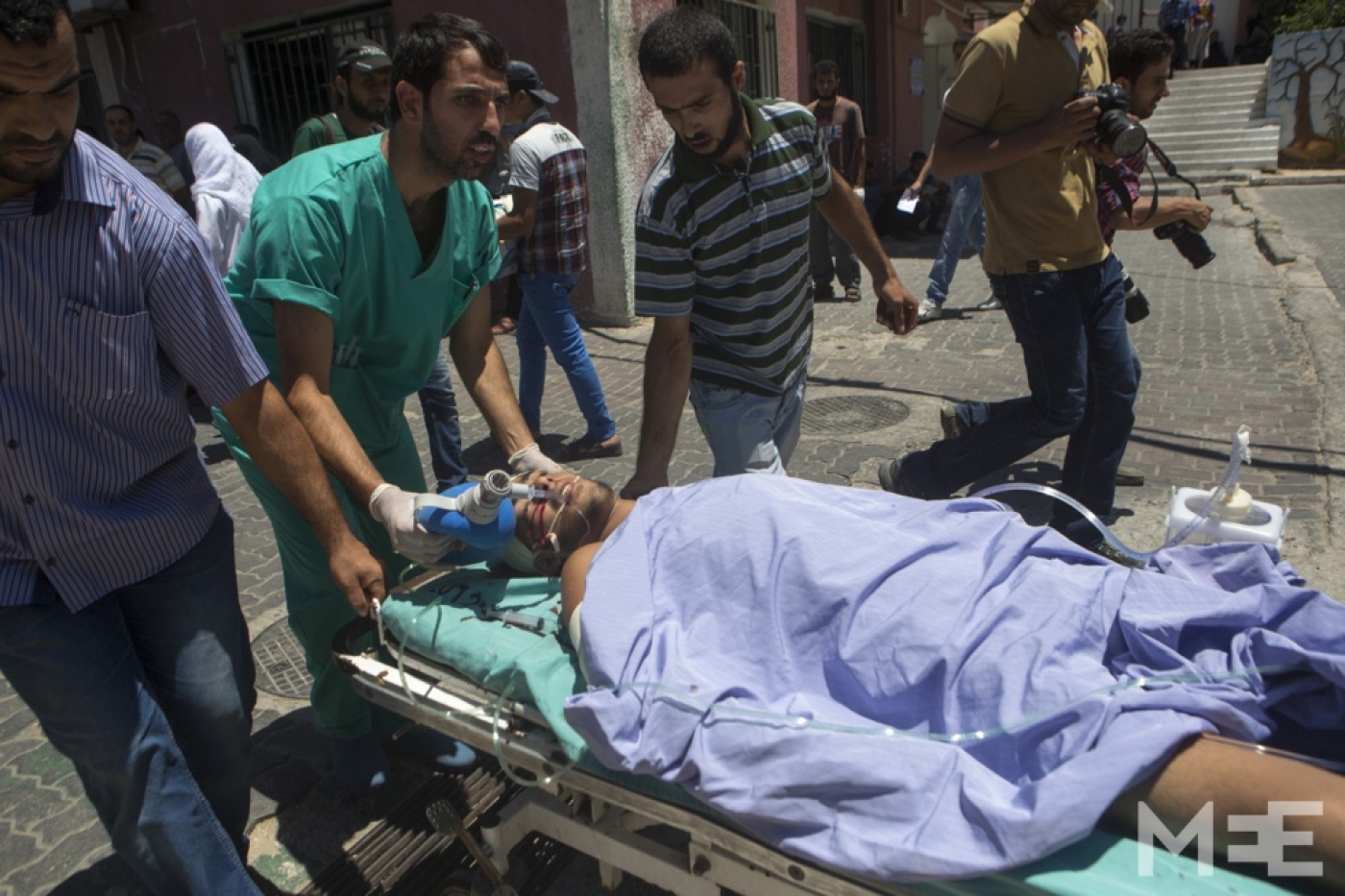 KHAN YUNIS, Gaza - Rasmiye Qudeh was sitting on a pavement in front of Nasser hospital, in Khan Yunis, and could not stop crying. Her husband was killed this morning, she stuttered through the sobs as the shelling continued all around.

She and her family spent last two days with dozens of other people in a tiny basement, waiting for the shelling and bombing of Khuza'a to stop. That was the safest space, they thought. But on Thursday morning a missile hit their hiding spot, killing her husband, Salem.

There were dozens, maybe hundreds of other people on the premises of Nasser hospital in Khan Yunis near to where Qudeh was mourning. Some were arriving injured, while others were waiting for the ambulances to bring the bodies of their relatives killed in Khuza'a, a large village with population of about ten thousand inhabitants, on the south-eastern border of Gaza Strip.

Heavy shelling of the area started on Tuesday night when people frantically began calling the International Committee of the Red Crescent and the Red Cross, asking the sister organisations to coordinate with the Israeli army and agree on safe passage for civilians. On Wednesday ICRC managed to evacuate 150 civilians, mainly women and children from the town, countless others stayed.

Many other people at the hospital were also screamed, and mainly directing their anger at the ICRC, seeing it as the most immediate institution to blame and sparking a wider debate for who was truly at fault – the Israelis, the aid groups, or if the tragedy was just a horrible mistake.

ICRC teams insist that their paramedics continually tried to reach the Khuza'a area on Wednesday, but that the Israeli army repeatedly fired in their direction, forcing them to retreat.

“For us, as the International committee of the Red Cross, what is important is that the parties to the conflict respect the will of the population,” Red Cross spokesperson Cecilia Goin said.

“Those people, who are not taking part in the hostilities - the civilians, as well as medical personnel, hospitals and ambulances - they must be respected under international humanitarian law.”

A report by the Gazan Palestinian Center for Human Rights (PCHR), a monitoring group, investigated this attempted exodus of people from Khuza'a.

According to the organisation, “Israel forces that had moved into Khuza’a [...] fired bullets and artillery shells at hundreds of Palestinian civilians who attempted to leave the village as there were reports about a one-hour coordination to evacuate casualties”.

Wael Abu Rujeila was among the hundreds of people desperately trying to leave Khuza'a on Wednesday.

“The ICRC told us that we could leave, and that they would wait for us at the entrance to the village,” Abu Rujeila told Middle East Eye. “So, thousands of people walked out of their homes and marched together with white flags. That’s when the tank shelling and shooting began.

“I am not sure how many people were injured, at least twenty, but maybe more. Everyone scattered in different directions, taking refuge in the nearest houses. One person was killed,” he explained. ICRC tells the story somewhat differently, labelling the incident a case of “confusion”.

“We do not force anyone to stay or leave certain areas, this is a confusion, we don't know where did it come from,” Gion said.

Abu Rujeila and his many relatives came to the Nasser hospital on Thursday, after sheltering with a relative the previous night.

The relative who took them in, Kamal Abu Rujeila, is a doctor and many other people also sought shelter or medical help there, but in the middle of the night even this temporary clinic and shelter was hit by the Israelis. The top floor of the house collapsed and many were injured.

Outside medics were not able to reach the place. Abu Rujeila seven-year-old daughter sustained moderate injuries, and other family members escaped with just some cuts and bruised, but the family was now completely destitute with nowhere else to turn.

“In the morning we walked with a white flag and our hands up in the air,” Abu Rujeila’s sister, Ismaa, said.

Ismaa, who did not want to give her last name, says many people are still trapped in Khuza'a and some sections of the village were literally “flattened”.

Abu Rujeila’s adds that: “Not far from where we lived, an area of 15 dunams, with many three-storey houses, was bombed to the ground.”

PCHR says that it has now documented two further instances where small groups of civilians tried to leave the village but were fired upon by the Israelis. Another five people were killed and six injured in the incidents, the group said.

The scenes of destructions and the killing in Khuza'a and nearby Abasan, bare a great deal of resemblance to Shajaiya, an area on the outskirts of Gaza City that has been under a similar kind of assault since Saturday night. There, at least 60 people been killed and hundreds more injured, sparking a mass civilian exodus on Sunday morning.

“The scale of the tragedy cannot be estimated yet," doctor Attef al-Hud, the director of Nasser hospital in Khan Younis, told Middle East Eye.

"We will only know what happened, once we have a chance to enter the area."

On Thursday, just until 1pm local time (11.00 GMT), the hospital received 21 bodies of those killed and more than a hundred injured who they were brought often in private cars because ambulances were still having a hard time reaching the area.

Expecting the worst, doctor Hud organised with a nearby Red Crescent rehabilitation centre - which has 80 beds on their premise - to cater for those with less serious wounds, but even these kinds of measures will leave the area stretched. And as for the bodies of the killed - the hospital will have to use a walk-in vegetable fridge in the area. “Our morgue is already overloaded," he explained.

The Nasser hospital is also facing a serious supply shortage. “I have to use the wrong types of sutures, because we run out of certain types,” said Hud. “Sometimes we are forced to use expired medical supplies, because we have no other options”.

But it’s not just the shelling and the killing that is hurting Gazans, and scores are also being rounded up and arrested by the Israelis.

Qudeh, who lost her husband this morning, says that four of her sons have been captured by the Israeli army.

“They went outside, risking their lives to look for another shelter for us, and they took my four sons,” she said.

The Palestinian news agency Maan, reported that dozens others were arrested by the Israeli army in the area, with the possibility of further arrests looming.

Rasmiye Qudeh’s daughter, Lina, is the only other member to have made it to the hospital. She sits next to her grieving mother, totally overcome by a mix of anger and sorrow.

“We wanted to go to UNRWA school, but it was closed,” she said. “We called ICRC, and we called Red Crescent, we called them all night. But they said they couldn’t do anything for us and turned off their phones”.

The lack of response prompted many residents to take action and on Thursday morning they decided to walk out with their hands up and white flags, but they were fired upon anyways claims Lina.

“We left bodies of those killed behind, we couldn't bring them. And there were many martyrs, and many houses destroyed,” Lina said.

Once the fighting died down a little, the ICRC did return to Khuza'a where it successfully evacuated four wounded people, a family of six and four dead bodies, Gion told the Middle East Eye, adding that the priority now was dealing with “are the injured people”.

he intervention, however, came too late for many. With the latest death toll in Gaza at 828 and rising, doctor Hud says he had lost track of which day has been the bloodiest so far. “Each day is worse than the one before,” Hud said. “On Wednesday, we received 13 members of the same family, two days ago it was 18 people from an-Najjar family.”