In pictures: Firefighters and medics working under Israeli fire A second attempt at coordinating a safe entrance into Shajaiya for paramedics and rescuers by the ICRC ended with the same result as the first one: medics and firefighters were working under Israeli fire. The crew managed to evacuate 81 people from Shajaiya, 11 injured and pull out one body of killed person from under the rubble, while they were shot at. Despite the agreement with the Israeli army that there would be a safe passage for ambulances from 3pm to 6 pm on Wednesday, the medics were not able to reach two injured people stuck under the rubble in one of the smaller allies of Shajaiya. The journalists accompanying the ambulances witnessed the paramedics heading towards the house with the injured people twice, and were forced to retreat by the shots fired in their direction.

On Saturday night, Israel began heavy tank shelling of this area, spread on the eastern outskirts of Gaza city. After the night that left at least 60 Palestinians killed and hundreds injured, people escaped in terror, running often barefoot, leaving all their belongings behind. On Sunday, ICRC also coordinated a three-hour humanitarian ceasefire, also broken. A director of civil defense in Tel el-Hawa district, Ayman Badwan told MEE, that he and his crew witnessed a killing of a paramedic when working that day in Shajaiya. "He was carrying an injured person when he was killed by a sniper” - he said. Three firefighters were injured when a shell hit their truck. Still, the rescuers on Sunday managed to collect 50 bodies, most of them women and children. "Their bodies were often burnt, killed either by shelling when they were fleeing the area or in their houses at night” - he added.
The numbers of Palestinians killed and injured are expected to rise as many have been trapped either inside the neighborhood under heavy shelling or under the rubbles. At least two ambulances were destroyed, and two paramedics were killed: Fuad Jaber and Ibrahim Sahabani. The attacks have continued since Saturday. Shajaiya witnessed also fighting between the Israeli army and militants groups.
The human rights organization in Gaza, Al Mezan, strongly condemned the Israeli attack on Shajaiya, saying that "serious violations” on international humanitarian law were committed by the Israeli forces, some amounting to war crimes. The organization said that "fire was directed at civilians without making any effort to abide by the principles of distinction, employing disproportionate force, directing fire at houses and other civilian structures, indiscriminately firing at fleeing civilians, and attacking and/or restricting the movement of ambulances." 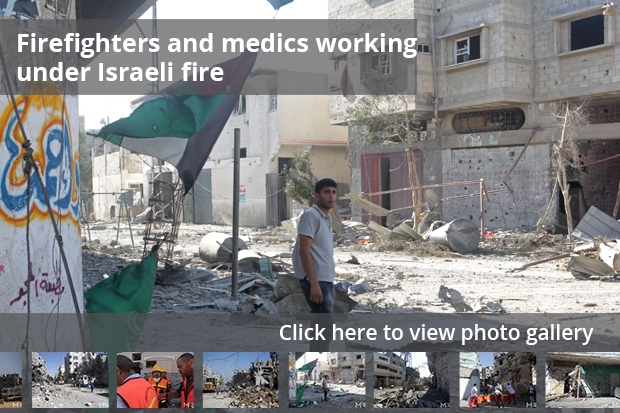