PKK and IS 'pose existential threats' to Turkey: Biden

US Vice President voices support for Turkish crackdown, saying Kurdish militants and IS are 'terror groups plain and simple' Joe Biden, the US Vice President, said on Saturday that Washington recognised the "existential threat" to Turkey posed by the Kurdistan Workers' Party (PKK) and compared it to the Islamic State (IS) group in comments supportive of Turkey's recent crackdown on suspected Kurdish militants and their supporters.

Speaking alongside Ahmet Davutoglu, the Turkish prime minister, at a press conference in Istanbul, Biden said that the PKK, which has waged a decades-long separatist struggle mostly in Turkey's Kurdish-majority southeast, was a "a terror group plain and simple".

IS was "not the only existential threat to the people of Turkey, the PKK is equally a threat and we are aware of that," Biden told reporters.

"We do agree with you that in terms of their actions Daesh [IS], PKK and al-Nusra [al-Qaeda's Syria affiliate] ... are simply terrorist groups," said Biden.

The PKK, which is listed as a terrorist group by the US and the EU, has killed dozens of members of the Turkish security forces in attacks since a truce collapsed in July.

But Turkey has also been criticised over its campaign against Kurdish militants in the southeast, with Amnesty International on Thursday accusing Turkish security forces of using "reckless" force and imposing "collective punishment" on residents of Kurdish towns where tanks have been deployed and curfews enforced.

The US is currently co-operating with the People's Protection Units (YPG) affiliated to the Democratic Union Party (PYD) who are fighting IS in northern Syria, but Davutoglu challenged Biden's assertion that the group is different from the PKK, saying that it took its orders from PKK leaders in northern Iraq.

"Turkey considers the Assad regime, Daesh and the YPG as a threat," he said, referring to Syrian President Bashar al-Assad.

But Biden praised Turkey for taking "very important steps to improve the security of its border" from IS militants who until recently controlled much of the frontier region in Syria.

Biden said Turkey and the United States were coordinating ever more precisely on what is a "shared mission on the extermination of IS".

"We do believe our plans together have gotten more contoured and more coordinated," he said.

"We are increasingly making progress, and that progress will be sped up as a result of our meeting today."

Biden said he was optimistic that a political solution to Syria's almost five-year civil war could be found, but said the US was also prepared in case a "military solution" was required, without making clear whether he was referring to a continuation of US air strikes against IS or an escalation in operations.

"We do know it would be better to reach a political solution," he said. "But we are prepared if that is not possible to having a military solution to this operation and taking out Daesh." 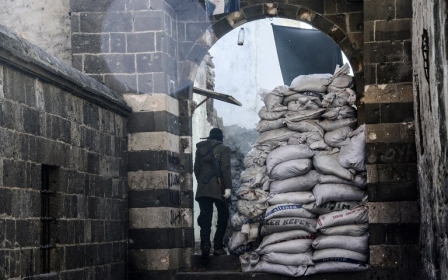