"Children, spouses and family have nothing to do with political rows," Zomlot said (Reuters)
By
MEE and agencies

The Palestine Liberation Organisation's ambassador in Washington said on Sunday that his family had left the US after being informed that their diplomatic visas would expire next month when the PLO's office in the country is shut down.

Ambassador Husam Zomlot said US State Department officials had told PLO office staff that his wife and children, aged five and seven, should leave immediately despite holding visas that are valid until 2020.

Office staff had also been told to close down their bank accounts and vacate the office's premises by 13 October, Zomlot said in a statement.

Zomlot left the US in May after being recalled to the West Bank by Palestinian Authority President Mahmoud Abbas in protest at US President Donald Trump's recognition of the disputed city of Jerusalem as Israel's capital.

“The State Department informed our colleagues, as part of the discussion on the closure, that the visas of my wife and children are dependent on the PLO delegation and as such will not be valid after the closure of the office and that if they wanted to stay they would have to change their immigration status,” Zomlot said.

As Trump destroys the two-state solution, one state is all that's left
Richard Silverstein
Read More »

He added: “This goes against diplomatic norms. Children, spouses and family have nothing to do with political rows.”

Hanan Ashrawi, a member of the PLO's executive committee, accused the Trump administration of being "vindictive."

"As if the announcement that the US would close our office in Washington, DC was not enough, this vindictive action by the Trump administration is spiteful," Ashrawi said in a statement. "The US has taken its attempts to pressure and blackmail the Palestinians to a new level."

The US last week announced the closure of the PLO's office in Washington in a move which John Bolton, the US national security adviser, described as “punishment” for the organisation's call for Israel to be investigated by the International Criminal Court.

The State Department said the move was taken because the PLO had “not taken steps to advance the start of direct and meaningful negotiations with Israel".

Saeb Erekat, the PLO's secretary-general, said the closure of the office was “another affirmation of the Trump administration’s policy to collectively punish the Palestinian people”.

The Middle East according to Trump: Seven things we learned from Woodward's 'Fear'
Read More »

Zomlot said last month that the US had “lost its status as peacemaker” after it cut more than $200m in funding to UNWRA, the UN agency that supports millions of Palestinian refugees to which Washington had been the biggest donor for decades.

“By endorsing the most extreme Israeli narrative on all issues including the rights of more than five million Palestinian refugees, the US administration has lost its status as peacemaker and is damaging not only an already volatile situation but the prospects for future peace in the Middle East," Zomlot said in a statement.

A diplomatic source told the AFP news agency on Sunday that the US had abolished a further $10m aid programme supporting projects to bring Israelis and Palestinians closer together.

The source said the money would be used instead to “improve” programmes inside Israel aimed at reconciling Israelis and Palestinian citizens of Israel, who make up almost a fifth of the country's population. 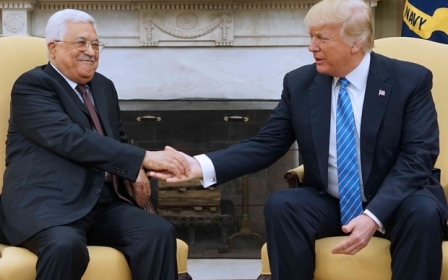 Occupation
US announces closure of PLO's office in Washington