A detainee at Cairo's Tora prison says sexual assault, torture and medical negligence are rife there following an opposition crackdown 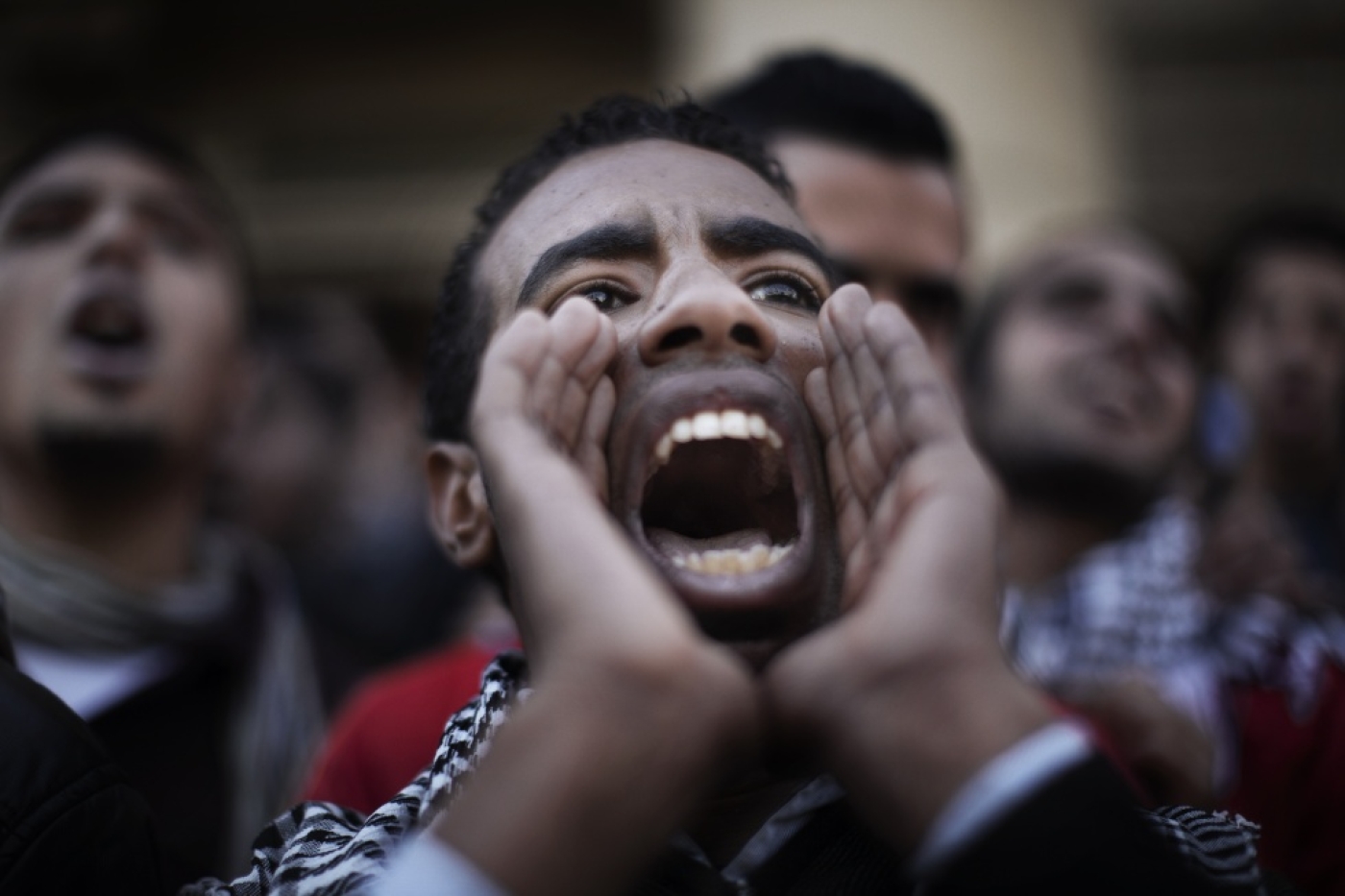 Abdullah Al-Fakharany, a 24-year old doctor and co-founder of the news network RASD, who has been detained since 24 August 2013 and currently remains in Cairo's Tora prison, has revealed harrowing cases of torture, sexual assault, electrocution and medical negligence.

Al-Fakharany said that a fellow inmate, 22 year-old Khaled (not his real name), a member of the Jihad movement from Cairo, was allegedly electrocuted in his genitals and was sexually assaulted with a wooden stick put up his rectum during interrogation. Prosecutors threatened to bring Khaled's mother and rape her if he did not admit to accusations made against him.

Furthermore, Ahmed Mefreh, legal researcher at Alkarama - a human-rights organisation campaigning on behalf of subjects of extra-judicial executions, disappearances, torture and arbitrary detention in the Arab world, claims that Egyptian authorities have abducted activists and taken them to secret prisons located in the desert, where they were tortured and sexually assaulted during questioning. He disclosed the case of a female detainee who was arrested during an anti-military protest in Abbasia, blind-folded and raped during her interrogation in secret detention. According to Mefreh, she claims there were 30 other women with her.

These allegations are part of a series of claims of sexual assault, torture and electrocution which have arisen over the past few weeks. The cases revealed in reports by BBC and The Observer of 19 year-old Omar El-Shouekh, a leader of university protests; Fadi Samir a Christian who celebrated Morsi’s ousting but opposed the military successors; and 15 year-old Ahmed Abdel Fattah, caught filming a protest on his mobile, expose Egyptian police’s repeated use of rape and torture as a weapon against opposition. A further allegation on social media of Hani al-Daidamoni an inmate of Egypt's Zagazig prison, having been tortured to death. Both Islamists and seculars, males and females, including teenagers have been targeted in this crackdown.

Barrister Rodney Dixon QC, member of a legal team led by Lord Ken Macdonald QC and representing the Muslim Brotherhood in a case submitted to the ICC requesting an investigation of the serious international crimes committed by the military regime said, “There is more than sufficient evidence to show a systematic targeting of opposition groups, both secular and from the Muslim Brotherhood, through killing, detention and torture.”

There are varying degrees of torture in Egyptian prisons used to inflict pain upon the detainees. The severest cases documented are linked to members of the Muslim Brotherhood or other Islamist groups and to activists linked to media networks that could be used to expose violations taking place.

Physical assault and beatings are ostensibly a standard practise during the ‘tashrifa’ or reception of new detainees into an Egyptian prison. This reception typically involves the beating, kicking and sometimes torture of new prisoners, who are forced to strip to their underwear and then battered by a row of police men for several hours.

Mefreh claims, “There is a systematic use of torture and physical abuse inside Egyptian prisons. Every detainee is physically violated; those not assaulted are the exception.”

Al-Fakharany who has been in detention for nearly eight months, witnessed the rupture of a fellow detainee’s eye ball, who was "beaten until his face was covered in blood and he lost his eye".

Several allegations have been made by detainees who claim to have suffered several broken limbs after a beating during interrogation or their reception into a prison.

Al-Fakharany conveyed that his fellow inmate Saeed (not his real name), a 47 year-old member of the Muslim Brotherhood arrested during a protest in Cairo, arrived at his prison cell with two broken arms and a drop wrist – a medical condition caused by an injury to a nerve of the limb, after being tortured during interrogation. Saeed was arrested from his work place in early April and interrogated for 10 hours at Bulaq police station. Al-Fakharany claims that during Saeed's interrogation he was hung from his wrists, beaten with blows to the head and electrocted around his genatilia till he lost conciousness.

According to Al-Fakharany, two other detainees, 24 year-old youth activist Ahmed (not his real name) and 23 year-old Mohamed (not his real name), were allegedly handcuffed to the back, hung from their wrists for hours and beaten all over their bodies. They were also allegedly tied in a foetal position with a wooden plank across their stomachs, hung and beaten during interrogation. Both detainees arrested in March 2014, suffered severe injuries and received no medical attention.

Likewise, Amena Zaghloul, a 17-year old high school student from Cairo, arrested on 24 December 2013 while trying to stop an Al-Azhar student from being dragged away by plain-clothed thugs during a university protest, made similar allegations.

Zaghloul who was beaten at the beginning of her arrest and threatened during her 28-day detention at two different police stations in Madinet Nasr, Cairo, said she witnessed regular physical assault of male detainees in the neighbouring cell “with belts”, “slapping on their ears” and “repeated banging of their heads on to the wall” until their “faces were covered in blood”.

Medical negligence is another grave issue faced by many Egyptian prisoners during their incarceration.

Al-Fakharany told the story of 63-year-old Sami Mahmoud, who suffered from diabetes and high blood pressure and had allegedly fallen into near unconsciousness at 5 am on 6 January 2014. His fellow prisoners banged on the cell door for three hours, asking for help. Their calls went answered until it was too late. By the time the detainee was transferred to a clinic, “he died immediately”. Mahmoud was arrested in Rabaa Square on 14 August, 2013 and had been detained since.

Al-Fakharany says that his family managed to smuggle in medicine during their visits, which he used to treat wounds and broken bones of fellow inmates after their beating. With no medicine allowed inside the prisons, inmates suffering from life-threatening conditions and long-term illnesses are in a critical state.

Zaghloul witnessed her friend Hanady Ahmed, a second-year student at Al-Azhar University endure three epileptic attacks during her month-long detention. Ahmed who is still in prison, was allegedly "slapped, kicked and beaten" by the police officers "until she was bruised and swollen" as they claimed to be helping her regain consciousness.

"Hanady did not receive any medical attention for her condition; medicine is not allowed into the cells," Zaghloul explained.

Alkarama estimates that 5,000 political detainees are in need of immediate medical attention, many of which are in life-threatening conditions. There are several accounts of medical neglect and consequential death in Egyptian prisons.

A joint statement by NGOs, including the Egyptian Initiative for Personal Rights, the Nadim Center for the Management and Rehabilitation of Victims of Violence and the Cairo Center for Human Rights Studies, called for thousands of prisoners at Egyptian police stations to undergo medical examinations and for an independent delegation to be dispatched to meet prison inmates.

Thousands of detainees have persevered brutal conditions during their incarceration at intermittent detention cells in prisons and police stations or during their transfer from one place to another.

Yehia El-Sheikh, 28 year-old accountant from Alexandria who was arrested on 6 October 2013 during an anti-military regime protest, gave accounts of inhumane conditions and consistent humiliation during his imprisonment.

Like many, El-Sheikh who was released on 8 April, said that prosecutors interrogated him on police property rather than neutral territory. During his six-month detention, El-Sheikh said that he shared a cell of approximately four meters squared and one bathroom with 25 other detainees. He was provided a diet of “inedible food” which was mostly “rotten and unfit for even animals”. El-Sheikh said his personal space was the size of an arms-length; detainees would have to curl up to sleep or take turns.

At one point, El-Sheikh had no access to nourishment until his mother “smuggled some food into the prison by tipping a police officer with 100 Egyptian pounds ($14.5) ”. He says he left prison suffering from allergies and skin disease due to the lack of hygiene inside the cell.

Likewise, Al-Fakharany claimed that for two days at Al-Khalifa police station in Cairo, he shared a cell of approximately five meters squared with 60 other inmates, mostly criminals. “Packed like sardines” with drug addicts and criminals who smoked drugs heavily in the cell, left him “barely able to breathe let alone sleep” for 48 hours.

Zaghloul, El-Sheikh and Al-Fakharany each claimed to have endured ruthless conditions while being transferred to a police station or prison. They claim to have been “crammed with tens of other men and women in a truck”, with “bodies literally lying one on top of the other”, “insufficient oxygen and unbearable heat”, causing several detainees to fall unconscious.

As Egyptian prisons overflowed with inmates since the widespread crackdown on dissident groups, police stations have been transformed into prisons.

“This [the transformation of police station to prisons] is a violation of international law which dictates that prisoners be held in spaces adherent to certain standards,” said Mefreh.

According to several human-rights organisation, tens of thousands of Egyptian activists have been arbitrarily detained and imprisoned since 3 July 2013. While some are eventually released after judges habitually renew their detentions every 15 or 45 days, and there are currently more than 20,000 still captive.

Meanwhile, approximately 16,000 prisoners decided to stage a hunger strike in 11 jails next week to protest against what they describe as "maltreatment" in their jails, an independent rights group said.

The rights group, Detainees of Freedom in Egypt's Prisons, said the detainees, all of which were arrested since the ouster of elected president Mohamed Morsi, decided to start the strike on April 30 to put pressure on the authorities to stop torture inside prisons and release “innocent” detainees.

"I categorically deny that there is any such thing as electrocution or torture in prisons or police stations," said General Abu Bakr Abdel Karim, a senior Egyptian official told the BBC.

In February 2014, 16 local NGOs called for an investigation into what they described as "increasing allegations" of systematic torture and sexual abuse in Egyptian prisons.

Earlier this month, the Egyptian Observatory for Rights and Freedoms said it had documented more than 270 cases of torture - and three cases of rape - against detained supporters of ousted Morsi in the month of March alone.

The rights group expressed concern over what it described as the maltreatment of detainees, particularly students, by Egypt's military-backed authorities.

“With evidence of over 1,000 killings, 20,000 people in detention and numerous accounts of torture, this is a crime against humanity,” said Dixon. 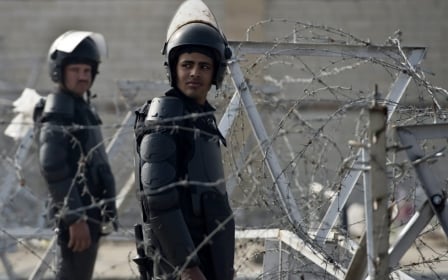