Hundreds protest outside Google offices in cities across the US, as pressure builds on company to cut ties with Israel 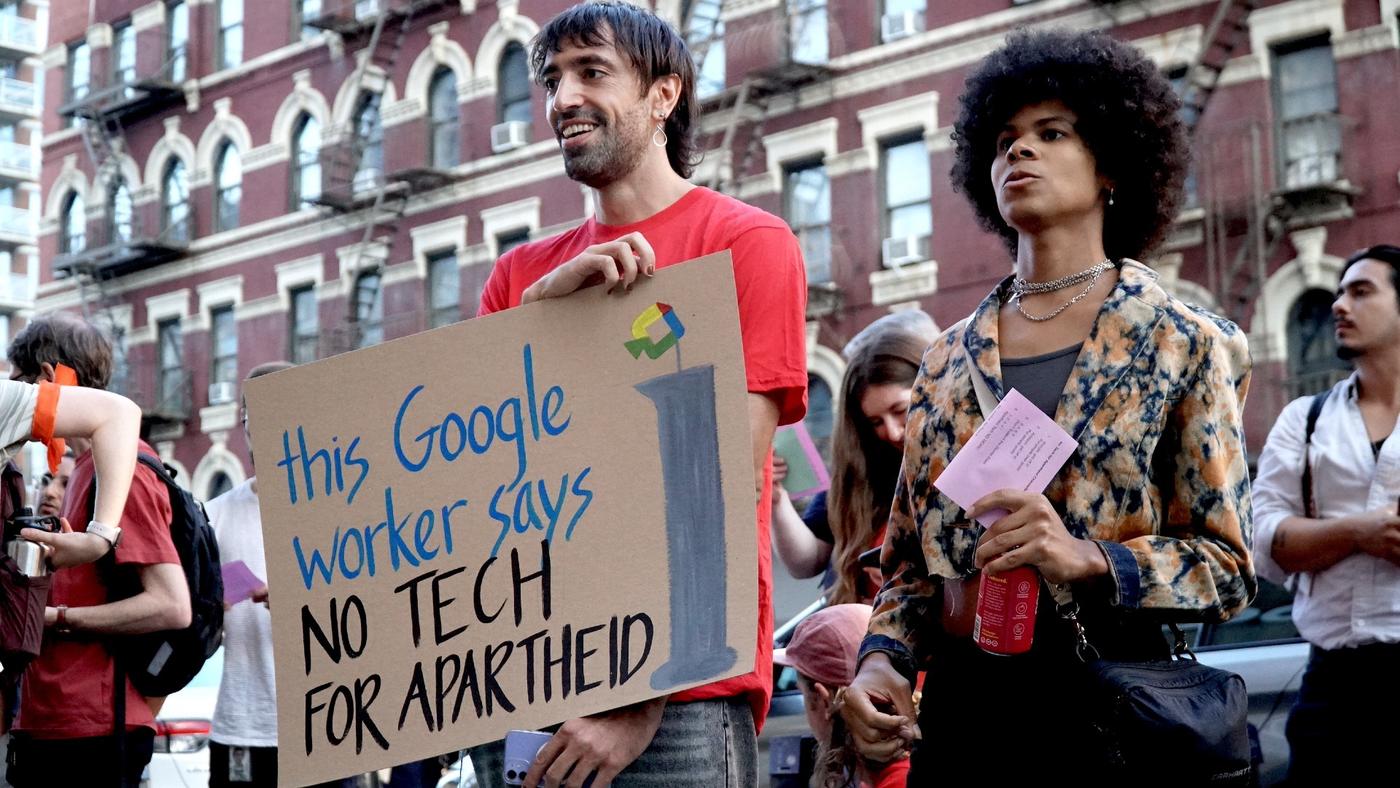 Around 250 workers and activists rallied outside Google's offices in Manhattan, New York, on Thursday (MEE/Azad Essa)
By
Azad Essa
in
New York City

Hundreds of workers and pro-Palestinian activists assembled outside Google offices in US cities on Thursday, calling on the company to stop work on its controversial Project Nimbus, the $1.2 bn contract between the tech behemoths and the Israeli government.

The protests outside several Google offices in four cities come as pressure continues to build inside and outside Amazon and Google to end collaborations with Israel, in what activists are describing as big tech's complicity with Israeli apartheid.

"We are are here because Google's leadership decided that arming the nations of the world, with tools of surveillance, control and violence, is more important than their workers' values, their user safety and Palestinian lives," one worker told the crowd gathered outside Google's offices in Manhattan, New York.

"They have chosen apartheid over justice, and money over morality. They announced this stance to the world when they signed Project Nimbus," the worker added.

Since Project Nimbus was announced in mid-2021, hundreds of workers at the companies have raised concerns they would be helping facilitate and advance Israel's apartheid project. Training materials leaked to the Intercept show the project will see Google provide advanced artificial intelligence and machine-learning capabilities to the Israeli government.

"While they provide no specifics as to how Nimbus will be used, the documents indicate that the new cloud would give Israel capabilities for facial detection, automated image categorization, object tracking, and even sentiment analysis that claims to assess the emotional content of pictures, speech, and writing," the Intercept wrote.

On Thursday, workers from both companies, including at least two Palestinian workers, rallied outside Google headquarters in New York, San Francisco, Seattle and Durham, in North Carolina, both to show solidarity with Palestinians and take their campaign inside the tech behemoth to a mainstream audience.

Carrying placards "No tech for apartheid" and chanting :"This Google worker says no tech for apartheid", activists from several organisations, such as MPowerChange and Acre's Crescendo project - as well as tech workers from both companies - said it was unacceptable their employers were profiteering off Palestinian oppression.

Activists told MEE that neither Google nor Amazon have responded to several letters and worker-led petitions that raised issue with the contract.

The actions on Thursday took place around a week after Ariel Koren, a Google employee, quit her job citing a hostile working environment after she spoke out and organised within Google against Project Nimbus more than a year ago.

Last week, several Palestinian Google workers posted testimonies to YouTube criticising the company's treatment of Palestinians and its censorship of employees who support them. The Palestinian workers at the rally in NYC did not speak to the media out of fear of workplace retaliation.

In October 2021, workers began a petition calling for the contract to be dropped. Since then, an estimated 800 Google and Amazon employees and 37,500 others have signed on to the call to end the partnership.

"Google and Amazon are standing by this contract and refusing to listen to the thousands of voices of opposition calling on the company to provide transparency, to do the right thing, and ultimately rescind this contact," Koren told MEE.

Organisers said an estimated 250 people assembled in New York and and another 250 in San Francisco, around 150 in Seattle and 40 in Durham.

In New York, protesters squeezed themselves onto the sidewalk between early evening traffic and the gigantic Google building at 111 8th Avenue in Manhattan, and raised their voices against the company's involvement with the Israeli military.

Building security in plain clothes manoeuvred through crowds, while a handful of police officers stood watch at opposite ends of the block.

Activists passed out pamphlets to other workers emerging from the Google building.

There were also a handful of Israeli supporters who arrived at the scene, with a giant Israeli flag, to launch a counter-protest.

One Google employee, a product manager, told MEE that he was told to stay inside the building until the protest dissipated. He admitted he hadn't heard of Project Nimbus before.

Dawlat Chebley, a tech worker unaffiliated with either company, told MEE that it was clear that not enough people knew how intrusive big tech had become.

"So many people - Arabs, Muslims, Palestinians - we use Google, we use Amazon, we don't realise that it's hurting our own people more than helping," Chebly said.

"If Google says Palestinians don't exist, a majority of people are going to start believing it," Chebly added.

Acknowledging the widescale ignorance on the role of tech and its profiteering off oppression, another protester, Chandra Darice, told MEE she had specifically come to honour those "tech workers who don't want to see their products being used to surveil and oppress the people of Palestine".

"People who work at places like Google and Amazon want to connect the world, these are global corporations that purport to be innovating in ways that are meant to help all of humankind, but at the same time, they are taking billions of dollars to violate the human rights of other people," Darice said.

Objections to Google's involvement with Project Nimbus have also raised concerns among other stakeholders, including shareholders.

On Friday, Kiran Aziz, from KLP, Norway's largest pension fund, told MEE she was "deeply concerned" by Google's insistence to go ahead with Project Nimbus.

"The human rights situation is worsening with the Israeli government shutting down NGOs, expanding illegal settlements and increasing the killings of civilians - including Palestinian children in the illegally occupied Palestinian territories," Aziz said in a statement sent to MEE.

"Google and Amazon should be aware of the risks and perform due diligence. KLP is writing to both of these corporations to demand transparency and to rescind Project Nimbus on the basis of the clear risks of violating basic human rights."

KLP is an investor in both Amazon and Google. In June 2021, the pension fund divested from Motorola over its alleged contribution to surveillance in the occupied Palestinian territories.

Neither Google nor Amazon replied to MEE's request for comment.