Protesters in Turkey critical of government, but against intervention

While international discussion has focused on military intervention in Kobane, Turkey - and protesters on its streets - do not support such a move 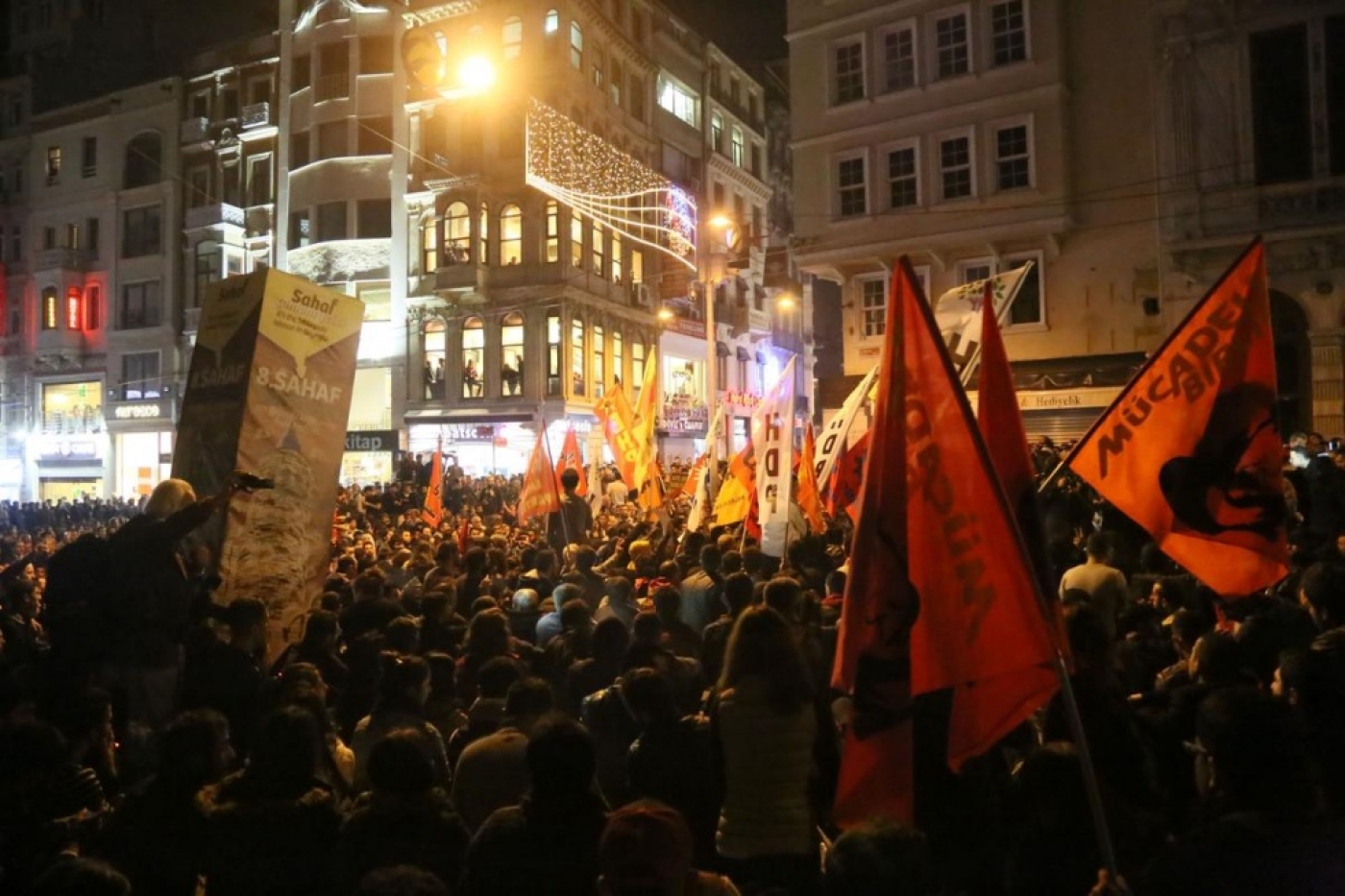 Turkey on Thursday said it cannot be expected to lead a ground operation against militants in Syria alone, amid growing pressure on Ankara from the West to intervene militarily in Kobane.

“It is not realistic to expect that Turkey will lead a ground operation on its own,” said Turkish foreign minister Mevlut Cavusoglu at a news conference with NATO secretary general Jens Stoltenberg.

While the international discussion in recent days has largely had a black and white, will-it, won’t-it take on Turkey and its potential military intervention, inside the country, as 23 people died in protests spread across 30 cities this week and curfews were imposed in Kurdish-majority areas for the first time in 22 years, the conversation is bit more nuanced.

It’s not Turkish military inaction that is spurring on protests as much of the Western media has reported, analysts say, so much as a belief among protesters that the government is bolstering the Islamic State group – something Turkey has stringently denied.

“The demonstrators are not demanding ground troops from Turkey, nor from the coalition,” said Guney Yildiz, a journalist and Turkey-Kurdish affairs analyst. “They are protesting against what they perceive as Turkey’s support for IS.”

“PKK has a strong campaign against the government by saying that AKP is supportive of IS, which has mobilised young people onto the streets. It is trying to push the government to act according to its interests,” said Burhanettin Duran, professor of political science at Istanbul Sehir University and member of the Turkey-based think tank SETA.

Like the protesters, Kurdish military commanders are not asking for a Turkish military intervention. Rather, said Yildiz who has been in direct contact with commanders in Kobane, they want a safe corridor between Turkey and Kurdish regions in Syria to allow for a weapons transfer to the YPG Kurdish fighters in Kobane and Turkey to open its border for Kurds to provide humanitarian and military aid to the YPG, he says.

The US has similar demands.

“Washington wants Turkey to provide more arms, logistic support and mobility to the Kurdish Syrian fighters in Kobane. Turkey, however, has blocked the passage and mobility of Kurdish fighters into the region,” said Fadi Hakoura, associate fellow of the Europe programme at Chatham House.

But Ankara fears that in helping the Kurdish militia in Syria, closely allied to the PKK, which has been labelled a terrorist organisation by Turkey and the US, would heighten its own security risks in the future.

“Turkey has reservations on the safe corridor because it doesn’t want to empower PKK...that’s one of the government’s priorities,” Duran said.

“If any arms go to the PKK, this may legalise the PKK, it may also in the eyes of the West which Turkey does not want,” he added.

The tumultuous situation in Kobane is not only a reflection of Turkish- Kurdish tensions, but also an illustration of the gulf between Ankara and Washington’s objectives.

US Secretary of State John Kerry has made repeated calls to the Turkish government for intervention. Turkey says it will participate in the anti-IS coalition, but it wants the campaign to widen its scope and take on Syrian President Bashar al-Assad, a condition Washington has so far rejected.

“Turkey sees the key source of instability in the region as the Asad regime in Damascus and the risks [carried by] Kurdish nationalism,” Hakoura told MEE.

Is this a tipping point for Turkey?

While the situation in Kobane has greatly impacted Turkey’s internal stability, analysts say it is unlikely that the upsurge across Turkey’s streets is a harbinger of another Gezi Park or Soma among a public who remain largely in favour of isolationism.

For a start, the nationalist and secular opposition groups in Turkey which formed the bulk of the demonstrators against the government last year are not supportive of the Kurdish demands.

Also, the violence and vandalism which Kurdish protesters have used in demonstrations this week have repelled Turks who might otherwise feel compelled to speak out against the situation in Kobane, said MEE’s contributor Cagri Ozdemir.

Some 40,000 people were killed during the Kurdish insurgency of the 1980s, and that period has left a bleak spot in Turkey’s national memory.

Likewise, as the situation has put stress on the peace talks between the Turkish government and the PKK, Turks may feel anxious about being associated with pro-Kurdish protests at this time – or at all.

“The Turkish public, especially the nationalists, tend to view the PKK and the Syrian Kurdish fighters as the greater danger to Turkey’s interests,” Hakoura said.

Other than the escalating violence and increasing instability domestically, the Turkish government faces two main challenges as a result of the situation in Kobane.

The rising tensions will likely to impact the already fragile Kurdish peace process. Furthermore, the AKP may be left weakened as parliamentary elections loom.

“If this situation isn’t overcome, there would be a huge effect on the parliamentary elections as the most significant winning point for the AKP is that it provides political and economic stability,” said Yildiz.

Hakura agrees: “Ultimately Kobane – whether it falls or not - will destabilise or impact the progression of negotiations between the PKK and Turkish government and may heighten friction between Kurds and Turks inside Turkey.”