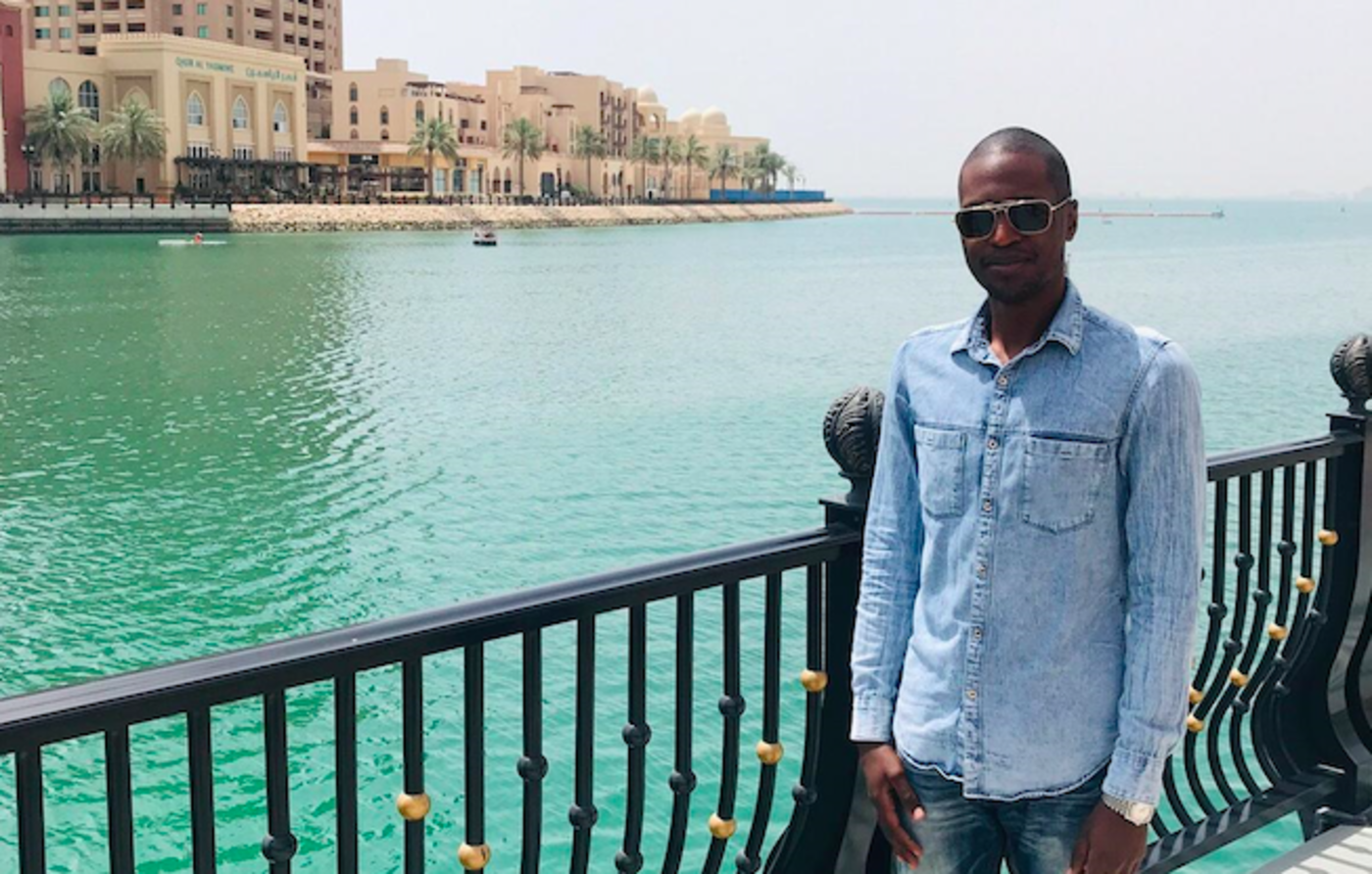 When Maggie Turner called her sister in Kenya, the last thing she expected to hear was that her son had been arrested and taken to prison.

Scrambling to find more information, Turner frantically searched for her son Malcolm's name on Google, and there it was.

Her 28-year-old son Malcolm Bidali, an outspoken migrant rights activist, had been arrested in Qatar. Using the pen name Noah, Bidali would write regularly for Migrant-Rights.org (MR) and detail the conditions faced by many foreign workers in the Gulf country as it prepares for the 2022 World Cup.

Detained for nearly three weeks by Qatar, Bidali had been placed in solitary confinement without trial or charge.

But on Saturday, Qatar's public prosecution announced that they had charged Bidali with receiving payment to spread disinformation, according to AFP.

"Mr Bidali has been formally charged with offences related to payments received by a foreign agent for the creation and distribution of disinformation within the State of Qatar," the GCO, the government's communication office, said in a statement on Saturday, without elaborating.

It said his case was transferred to the Public Prosecution after a thorough investigation and that Bidali was "receiving legal advice and representation ahead of the court date, which has not yet been set".

Speaking to Middle East Eye from her home in Jersey, England, Turner recounts the experience she has faced over the last few weeks as she battles to find out more about her son's whereabouts.

Sitting next to her partner Mick, Maggie wears a white blazer and slowly talks about the mental toll the last few weeks has had on her as she worries for Malcolm.

"I have not been able to sleep or think straight. Every time I receive a phone call, I panic and fear the worst has happened," said Maggie as she is comforted by Mick.

"I'm worried about Malcolm's mental health. He has not had outside contact for several weeks, and I don't know how that is affecting him.

"He is sitting there by himself, not knowing why he is there or what he has done wrong. I can't even begin to imagine what must be going through his mind."

One phone call since arrest

The first and only time Maggie spoke to Malcolm since his arrest was on 20 May, when the Kenyan embassy in Qatar intervened on her behalf.

Talking to Malcolm for nearly 10 minutes, Maggie felt her son was struggling to cope in prison after learning that he was placed in solitary confinement.

"There was no confidence in his voice when we first started talking, and I attributed that to probably him not having spoken to anyone since his arrest," said Maggie.

"But as I continued talking to him in that short period of time, I slowly felt a bit more confidence coming out of his voice.

"I asked him if he was being fed properly. Malcolm said yes. He said they let him go to the gym for an hour and that he has toilet facilities," recalled Maggie, who noted that two guards were present during her call with Malcolm.

"He was counting down to the last three seconds of our call and said he hoped to get a chance to call again soon."

But six days on from the call, Maggie said she felt "helpless" and feared her son might have faced torture despite being told that he is well and in custody.

During his detention, Bidali has had no access to a lawyer and only been seen by the deputy head of mission from the Kenyan embassy in Qatar, according to his mother.

Her attempts at speaking to him again have gone unanswered, with Maggie urging the Kenyan embassy to make it possible to speak to him again.

On Friday, human rights groups, including Amnesty International, Business and Human Rights Resource Centre, Fair Square, Human Rights Watch and Migrant Rights.org, voiced concern for Malcolm's safety after the Qatari government refused to say why he has been arrested and placed in solitary confinement for 23 hours a day.

The rights groups said the Qatari government had refused to confirm Bidali's whereabouts after several requests and said that "until [Malcolm] is either taken before a court to face recognizable charges or is released, his detention continues to constitute an enforced disappearance".

The cause of Bidal's arrest remains unclear. Providing a unique insight into the life of workers in Qatar, Bidali remained anonymous until very recently when he appeared in front of a conference to talk about migrant rights in the gas-rich country.

Shortly after his appearance, he received a suspicious link on a Twitter account he used under a pseudonym.

Analysis by Amnesty International showed that a tweet containing a graphic from HRW included the URL that could record the IP address and other data about the person who clicked on it.

Six days after Bidali received this suspicious URL, he was detained by Qatari police. Amnesty believes the link may have been used to identify or locate Bidali but said it could not confirm if the Qatari government was behind the phishing attack.

Bidali returned in 2018 from Kenya to Qatar, where he worked as a security guard in Doha. He left Qatar previously to try to start a greenhouse farm.

Before his arrest, security guards at two companies in Qatar also held protests over pay and worker rights.

His case highlights the restrictions faced by workers trying to organise inside the emirate as trade unions continue to be banned for foreign workers.

The arrest of Bidali, who was employed by GSS Certis at a development for the Qatar Foundation (QF), has prompted students who attend or previously attended the foundation to call on it to speak up for his release.

Earlier this month, over 240 students and alumni from the QF sent a letter to Sheikha Hind bint Hamad Al Thani, a member of Qatar's royal family and CEO of QF, demanding details on his whereabouts and the charges against him.

In response, Sheikha Hind said she was aware of Bidali's detention but trusted the authorities to follow the "correct procedures to complete their investigation".

Maggie also received an email from Sheikha Hind, who said she was waiting for the investigation to be concluded.

Bidali's arrest also comes at an awkward time for Qatar as it faces pressure to improve workers rights ahead of the World Cup.

Several countries, including Germany and Norway, held protests before their World Cup qualifiers in support of workers' rights in Qatar.

For now, Maggie and her partner say they have been overwhelmed by the support given to them by rights groups across the world.

Taking a deep breath, she said: "I am proud of the courage my son has shown but just want answers on why Malcolm was arrested." 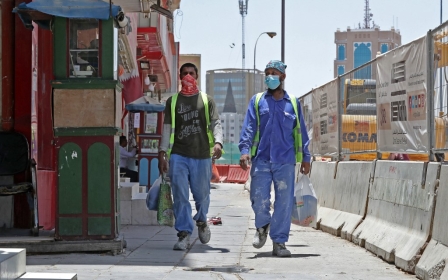 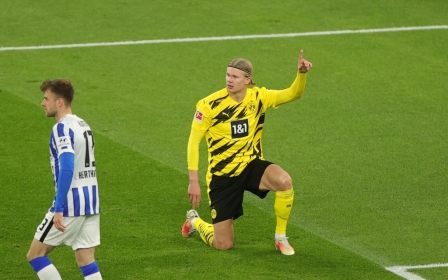 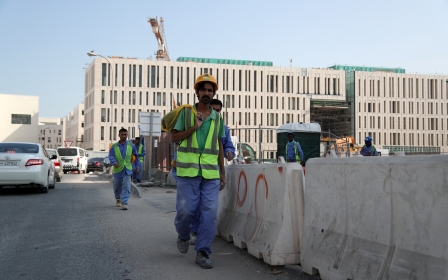