Queen accused of horse trading with Bahrain on human rights The gift by the Queen of a three-year-old stallion to the King of Bahrain has prompted outrage among rights campaigners who say it is the latest example of the UK's support for the increasingly authoritarian Gulf state.

The British monarch's gift horse comes as the UK is facing criticism for “lending cover” to Bahrain as it pursues a “disastrous” year-long crackdown on human rights.

The UK government has done little or nothing to investigate reprisal attacks against people in Bahrain following protests mounted by exiled nationals in London, according to Amnesty International.

King Hamad Bin Isa al-Khalifa received the horse, which was bred at the Queen’s stud farm in Sandringham, on Sunday and “expressed thanks and appreciation” to the British monarch, Bahrain's state media agency reported earlier this week.

He went on to praise the “deep-rooted historic relations” between Bahrain and the UK. MEE has contacted Buckingham Palace for comment.

Why the long face?

The gift of the horse, a diplomatic signal of close ties between London and Manama, comes less than a month after Amnesty said the country had retreated from promised reforms and "dramatically" escalated a clampdown on political dissent over the past year.

The rights group also called on Manama to halt reprisals against "peaceful critics and their relatives" after Bahrain authorities targeted the family of Sayed Ahmed Alwadaei, a prominent critic who lives in exile in London.

Hours after Alwadaei took part in a peaceful protest outside Downing Street during the UK visit King Hamad a last October, his wife and infant child in Bahrain were arrested, with his wife alleging she was mistreated and then threatened with criminal charges. Interrogators made specific reference to Alwadaei’s protest in London, reportedly calling the government critic “an animal”.

Other UK-based Bahrain activists have reported their families being harassed in Bahrain, including after they had mounted protests about King Hamad’s attendance at the Royal Windsor Horse Show, which is sponsored by Bahrain. In March, other members of Alwadaei’s family were arrested and are now facing serious criminal charges, apparently as a reprisal against Alwadaei’s continued opposition activities in Britain.

Alwadaei, the director of advocacy at the Bahrain Institute for Rights and Democracy, told MEE: “The Queen is now seen to reward the King of Bahrain, despite the fact that he has taken his citizens' family members as hostages in cowardly attempts to prevent UK-based Bahraini people from protesting. This gift is effectively a green light, signalling that the Queen has no issues with the Bahraini royal.”

The English-educated king and the British queen have reportedly developed a close friendship that spans several decades.

The Queen has a purely constitutional role, while King Hamad has power over Bahrain’s executive, legislative and judicial authorities in Bahrain, according to democracy watchdog Freedom House.

Despite rights concerns, Hamad has repeatedly joined the Queen at the Royal Box at Ascot and at the prestigious Windsor Horse Show, even in the wake of public criticism, including widespread outrage over Bahrain’s treatment of protesters during the 2011 Arab Spring.

The Queen is known for her love of horses and knows many Gulf leaders from their visits to stud farms and equine events in the UK.

However, she has been criticised over her decision to invite King Hamad to her 90th birthday celebrations last year, with human rights groups raising concerns over Bahrain’s treatment of pro-democracy protesters.

This gift from the Queen appears to be an especially brazen example of London's ongoing support for Bahrain's repression: it will surely be interpreted as such in Manama

Alongside the close relationship between the Houses of Windsor and Khalifa, the UK government, a key strategic ally of Bahrain’s, has consistently downplayed human rights abuses in the country, and the UK’s most recent human rights country assessment on Bahrain referring only to a “mixed picture”. The Foreign Office did not immediately respond to a request for comment.

Nora Ziegler, one of three protesters ejected from the Royal Windsor Horse Show in May after protesting King Hamad’s presence, described the gift as a “blatant reward” for “repressing human rights in Bahrain”.

Rights groups have repeatedly called on the British royal family to distance itself from Bahrain’s ruling family, but analysts say the relationship is seen as a key tool to further defence and investment deals.

“The royal family is a key part of Britain's infrastructure of support for the Gulf regimes...these personal relations provide an alternative to the usual diplomacy and help smooth the way for British investment and trade including for arms exports,” Mark Curtis, author and foreign policy analyst, told MEE.

He added: “This gift from the Queen appears to be an especially brazen example of London's ongoing support for Bahrain's repression: it will surely be interpreted as such in Manama.” 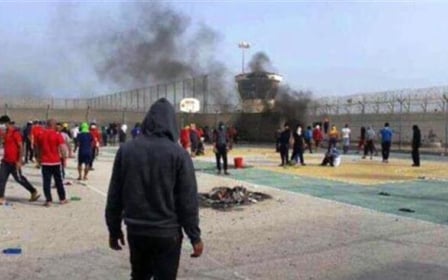