Life in Europe is difficult for refugees from Libya; they fondly recall the days of Muammar Gaddafi 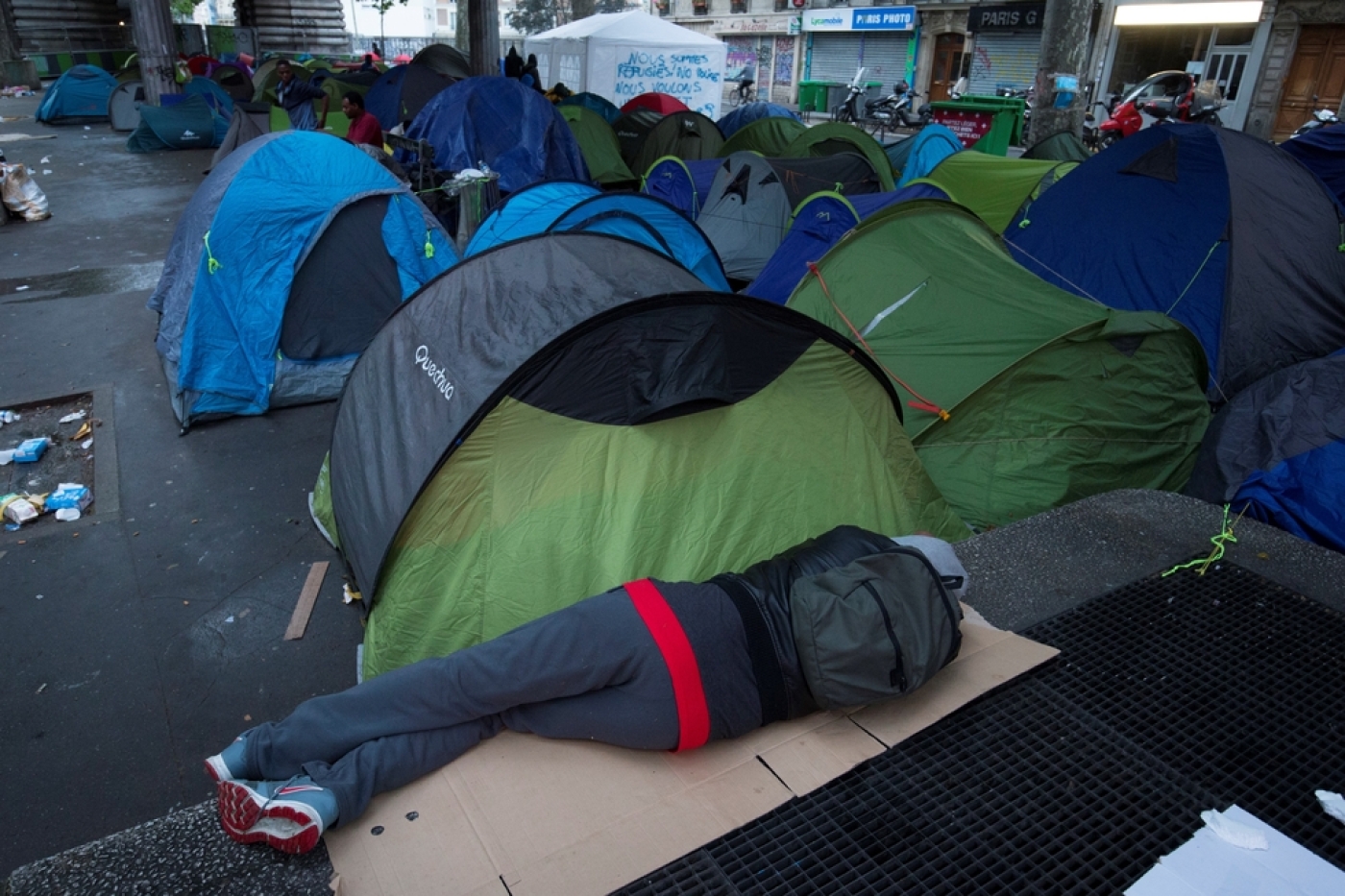 PARIS - Sitting on the street in a corner of an illegal refugee camp in Paris, three Libyans share their last meal before the Ramadan dawn that will mark the beginning of another difficult 18 hours of fasting. As they fold away a makeshift tablecloth and carefully place food donated by Parisian charities into a carrier bag, they discuss the exact moment of sunrise, trying to determine if they have time for another hand-rolled cigarette or swig of water.

This light-hearted banter belies their predicament - destitute on the streets of Paris in a country where they neither speak nor understand the language.

They reminisce about Ramadan in Libya, scrolling through images on their mobile phones, comparing pictures of bygone family iftars - colourful banquet-like platters laden with food.

“There are charities and people who bring food to the camp, but it is always cold. And the weather is cold,” said 18-year-old Hamdi. “Occasionally they bring hot food, but it is not enough for everyone and people fight for it. I’m not going to fight for food, I would rather go without.”

He added wistfully that the last time he had a decent hot meal was in Libya, three weeks earlier, before setting out on his European adventure.

Hamdi hails from the town of Tawergha, where all residents were driven out in 2011 after Muammar Gaddafi-era soldiers from the town were accused of committing war crimes. For five years, he lived in a makeshift camp for internally displaced people in Tripoli. Marginalised by his background, unable to access a decent education and finding it impossible to envisage any kind of future in Libya, his family pulled together $730 for him to risk crossing the Mediterranean in an overcrowded inflatable dinghy.

“Many of us from Tawergha left Libya because we were scorned in our own country,” he said. “There was no future for me there.”

Although he has been in Europe for less than a month, he is already questioning his decision, saying he did not anticipate how difficult life would be.

Libyans who take the illegal migrant boats towards Italy are often underreported, partly because many declare a different nationality upon arrival, like 19-year-old Malek from Benghazi, who fled Libya 10 days earlier, after two years of civil conflict left his home and city in ruins.

“I was told to tell the Italians I was Palestinian because they think any Libyans on board are people smugglers, so I threw my passport in the sea,” he said. “But the interpreter in Italy was Palestinian and interrogated me about his country when I told him I was from a town I saw something about on TV. He knew it was a lie but couldn’t prove it, so eventually I was registered as Palestinian.”

The collar of Malek’s white T-shirt was still stained with blue ink from trying to resist Italian police taking his fingerprints. He surrendered after watching them use tasers on others who refused. Two Sudanese migrants living at the same Parisian camp said 10 of the men from their boat were tasered for the same reason.

Ten days living rough in Italy and France, during which Tunisian and Moroccan migrants conned him out of a few hundred Euros he brought with him from Libya, have left him disenchanted.

“I thought Europe was good, but now I see it is not. Libya has a lot of problems, but we have a lot of problems here too.” he said, sighing. “If I can get a place to live I will stay, but right now I just want to go home, especially because it is Ramadan, which is a family time for us.”

Pride and fear have kept 24-year-old Mohamed, a former Gaddafi army soldier who fled Tripoli in 2011, in Europe for the last five years, where he has tried and so far failed to build a new life for himself.

“In Libya, I had everything - a car, money, a home, big muscles and a life. But, after they killed Gaddafi, I had to leave because I knew they would probably kill me too,” he said.

A small rucksack holds his worldly possessions - a change of clothes, a mobile phone and charger. Five years of sleeping rough in European cities have left him gaunt and wide-eyed. Mohamed’s mother messages from Libya asking for photos, but he always finds an excuse not to send one.

“It would break her heart to see how much weight I have lost,” he said.

After being sent back to Italy - where he registered as a refugee in 2011 - from eight other European countries, Mohamed says he dreads returning again to Italy, as the country offers no support for refugees. Far from being the gateway to a new life in Europe, Italy can prove to be an obstacle that prevents migrants settling elsewhere in Europe. The beleaguered Italian authorities often do little more than take fingerprints to register new arrivals before releasing them. But the fingerprints are fed into a European database and migrants picked up by the police in other countries are automatically returned to their country of registration.

“I was told France doesn’t care about the fingerprints, so now I am trying for asylum here,” he said. “All I want is to find a job and make enough money to buy a nice car and then I can finally go home. I can’t return with nothing after five years, that would be shameful.”

The three Libyans are among many refugees who, finding themselves homeless and penniless in Europe, keep the truth of their predicament from their families back home, inadvertently perpetuating the myth that Europe offers a panacea for those fleeing war, poverty or persecution.

Before, Libya was a great country where I would have had a good future - Malek

The disenchantment they feel about Europe is nothing compared to what they feel about their own country. Mohamed, Malek and Hamdi are still supporters of the former Gaddafi regime, the demise of which they believe ruined otherwise promising futures.

“Before, Libya was a great country where I would have had a good future,” said Malek, decrying the 2011 NATO intervention.

“Now look at my country - no money, no oil, no peace, no stability. We would never have taken the boat with the Africans if our leader were still alive. We would be going to Europe on scholarships instead.”

Mohamed scrolled through his phone, full of memories of Libya’s former glory - images and video clips of the country’s ex-leader, photos of himself in uniform, wielding weapons twice his size, or lounging on a Tripoli beach with friends. The three discussed how they would welcome the return to power of one of Gaddafi’s children - mentioning his son Saif al-Islam, imprisoned since 2011 in the mountain town of Zintan, or even his daughter Aisha, living in exile in Oman.

Mohamed selected one of many songs glorifying Gaddafi from his phone, penned by a Libyan singer now living in exile in Tunisia, and as the tinny melody echoed into the misty Parisian dawn, the three young men sang along in unison. As the song ended, they raised their hands in the four-fingered salute that was Libya’s motto for four decades: “Allah, Muammar, Libya wa bis [only].”

Five years after Gaddafi’s death, even 2,800km away in France, his legacy lives on. And these migrant Libyans are not alone - they reflect a segment of Libyans who still pine for life under their former leader, including some former revolutionary fighters who now view the 2011 uprising as a mistake. Such pro-Gaddafi sentiment remains one of Libya’s most closely guarded secrets.

After seeing in the Ramadan dawn by honouring Gaddafi, the three prepared to return to the two tents they share with Tunisian migrants.

“We are living the European dream,” said Mohamed, gesturing around at the tightly packed tents lining the Paris street, housing hundreds of homeless refugees from Africa and Afghanistan.

“But just look at the reality of that dream. In Libya, I had everything. Here I have nothing.”

The conversation briefly returned to iftars in Libya and they discussed favourite Libyan dishes and accompaniments - bazeen, macaroni, harissa, and squares of syrup-laden basbousa for desert. Despite being destitute and often going hungry for days, the three young men were committed to observing Ramadan with the same adherence they would in Libya, whatever happened.

“For sure. It will be another long, cold day,” said Malek. “But Allah will get us through it.”

When senior staff at the Libyan embassy in Paris heard that there were three homeless Libyans in Paris, they expressed surprise. They said should any Libyan in such a situation voluntarily wish to return to Libya, the embassy would organise and cover the costs of repatriation. 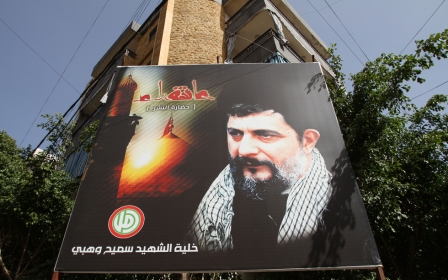 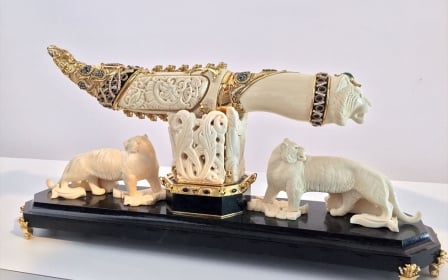