Ramadan in no-man’s land: Refugees on the run in Serbia 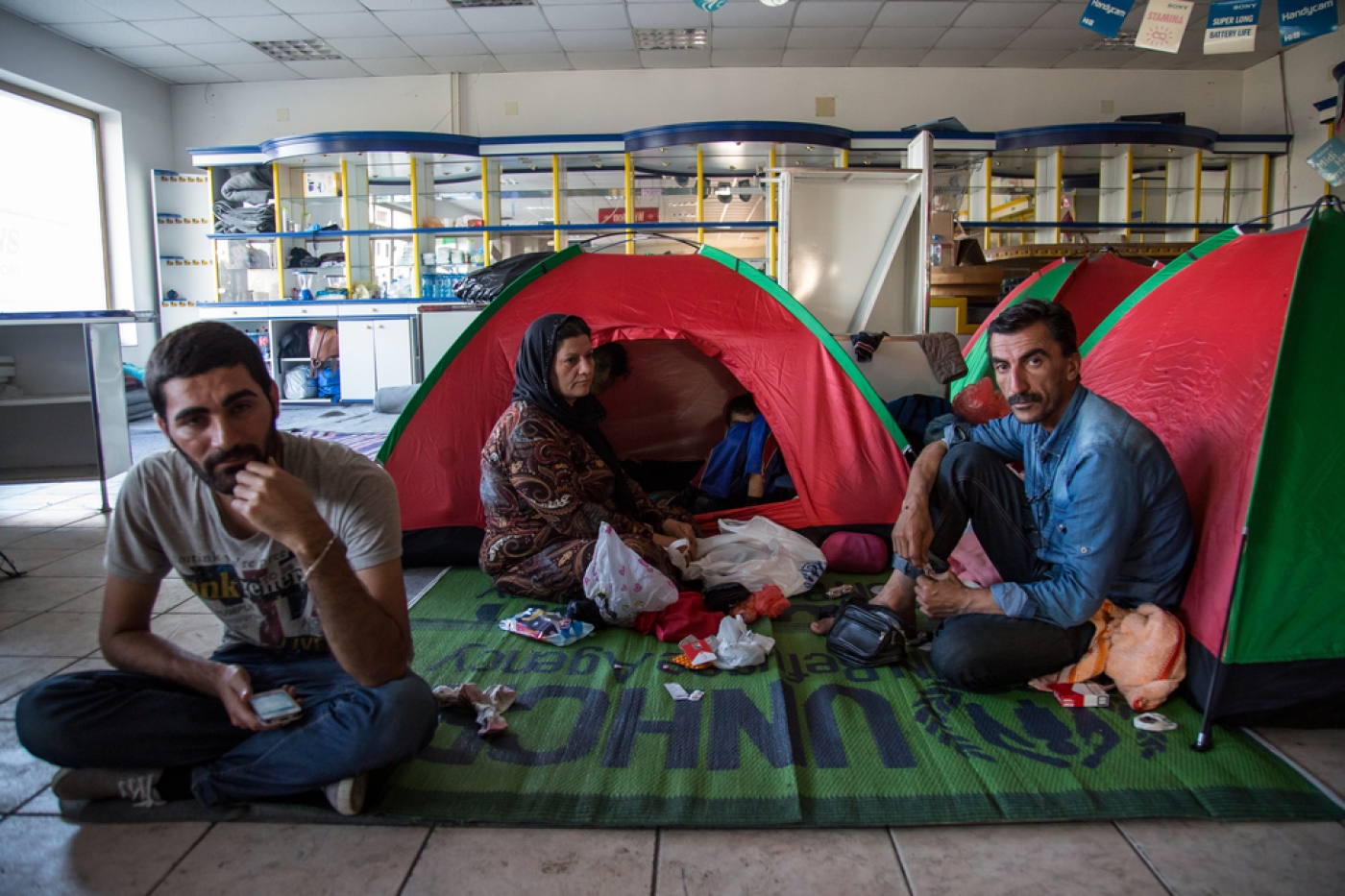 Described as "no-man’s-land camps" because they sit beyond the Serbian passport controls but before the Hungarian checkpoint, such camps are in a poor condition. When MEE visited the Kelebija border crossing some families were sleeping without tents in makeshift shelters made of sticks and blankets with 200 asylum seekers forced to share three toilets and one tap.

Roughly 100 refugees and migrants a day are arriving at Serbia’s heavily fortified border with Hungary where strict controls for asylum seekers means they either become stranded in makeshift camps or cross the border illegally with the help of smuggling networks.

“I don’t like it here, everything is bad. We have nothing, no food, no shelter. Life is very difficult,” explained Marwa Murat-Ali, a Yazidi woman from Shingal, Iraq.

Officially the Western Balkan route, which hundreds of thousands of refugees have taken to reach Northern Europe, was sealed in March when nations along the route closed their borders. But the flow of people has not been stopped entirely as many still make the journey illegally.

Around 400 refugees have set up camps at the border villages of Kelebija and Horgos where tents have been erected against the metre-thick razor wire fence erected by Hungary last year.

Hungarian authorities generally let in around 15 people a day, keeping a dim hope alive for some.

“The Hungarian police have a list and every day they take 15 people from the [Kelebija] camp and they go through the gate into Hungary,” said Ahmed, an Iraqi refugee. “People wait a long time to be selected, it’s a first-come-first-serve thing. I am here for 15 days.”

Most of the camps inhabitants are not observing Ramadan, citing the difficulty of fasting in such conditions. Others such as Ahmed say they will fast once they have left the camp.

“Some people are fasting but not many. It’s difficult here to fast. If you are travelling the Quran says you can wait and fast when you’ve reached your destination, so that’s what I will do.”

A few dozen refugees are also able to find shelter at the Subotica Refugee Camp run by Serbia’s Commissariat for Refugees. Officials from the commissariat say they are planning on expanding the centre.

According to the UNHCR “400 refugees, asylum seekers and migrants [are] encountered/assisted on average every day” in the Serbian capital, Belgrade, with the majority of new arrivals coming from Syria, Afghanistan and Pakistan.

Most will have already crossed illegally through Greece and then Macedonia or from Turkey and Bulgaria having paid smugglers thousands of dollars to make it this far.

Upon reaching the Serbian capital the new arrivals congregate in two parks adjacent to the bus terminal that act as a meeting place for refugees, migrants and smugglers. The pit stop is a time to rest, coordinate and receive assistance from aid groups that distribute food and provide advice.

From here, refugees and migrants either take taxis or buses north, driving for around three hours to reach the northern town of Subotica where they are met by aid workers who hand out food and blankets and provide some basic information.

With Hungary accepting just a handful of refugees per day, and Subotica seeing a constant stream of new arrivals, many end up paying smugglers to take them across the border or attempt to cross illegally themselves, often with tragic consequences.

Just a week ago, a 22-year-old Syrian refugee drowned in the Tisza River on the border with Hungary. It was alleged that Hungarian police had pushed back a group of Syrian and Iraqi refugees who attempted to cross the river and in the process the young man went missing. His body was recovered two days later.

The UNHCR said it “remains concerned about the increasing number of allegations of abuse in Hungary against asylum-seekers and migrants by border authorities”.

“More evidence is emerging that Hungary’s restrictive policy of admitting only 15-17 asylum-seekers daily… is forcing desperate people into the hands of smugglers and towards alternative, irregular and often dangerous routes.”

'I want to go to Germany'

On a bus from Belgrade to Subotica MEE spoke with a group of 10 migrants and refugees who had entered the country illegally.

Rezgar Karim Ahmad, a 23-year-old Iraqi Kurd from Erbil explained that he is not fasting for Ramadan. “I was born a Muslim but I didn’t choose it, my parents chose it,” he explains, “After 20 years I thought about it and thought Islam was no good for me.

“I like good people, good friends, drinking alcohol and enjoying myself. In Iraq everyone interferes in your life. Do this, do that, don’t do this, don’t do that.

“I want to go to Germany because I think people have a good lifestyle. I want that lifestyle.”

Rezgar and his friend Amir Hossein, 30, from Sulaymaniyah, Iraq, cited poor economic prospects as their primary reason for leaving. “In Iraq life is no good, there’s no jobs,” says Amir.

“We don’t have enough money for university or for life. No money, to marry or to own a car. There’s no hope in Iraq.”

Rezgar describes the journey as difficult and expensive but ultimately he hopes it will be worth it.

“My journey here was very bad. You couldn’t understand how bad it was. Bad food, bad clothes, walking though forests and mountains, always sleeping in tents. But I did this so that one day I can have a better life,” he told MEE.

At least a third of the group claim to have arrived on the Greek island of Chios after 20 March, the date the EU-Turkey deal came into effect and saw all new arrivals detained inside closed refugee camps.

The young men say they escaped from the island with the help of smugglers. Hessam Lotfi, 31, from Tehran, another passenger, claims to have paid 1,000 euros ($1,230) to be smuggled to the Greek mainland on a ferry.

When Greek authorities moved in to close Idomeni at the end of May and transport its inhabitants to military-run facilities, 4,000 of the camp’s then 8,000 inhabitants were unaccounted for. It was speculated that they were either sleeping rough in Greek cities or had already crossed illegally into Macedonia.

After arriving at the Subotica bus station refugees are immediately greeted by lines of taxi drivers offering their services and aid workers who provide a simple bag of food, which for many fasting for Ramadan will be the first food they eat since sunrise at 5am. Aid workers direct them to official camps, but many have their own idea of where they will go.

“It’s all arranged for them in advance,” explained one aid worker who did not want to give their name as they were not authorised to speak to the press. “They know exactly where to go: they arrive, collect the food, walk past all the taxis and then just sit down on the pavement and wait.”

A new group of Afghan arrivals told MEE they were waiting for a phone call from a smuggler who would help them carry on their journey.

“He doesn’t show himself, we don’t see him, we just speak on the phone and if he gets paid he arranges everything,” one of the men who did not want to give his name said. “It is hard travelling like this, it makes me nervous, we know nothing and we just have to wait for him.”

“We are just passengers… We don’t know where we will sleep, where we will go. Inshallah we will be in Hungary tomorrow. But now we must wait here,” he added. 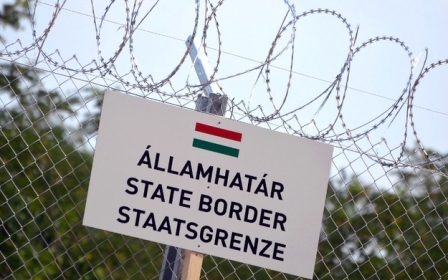