Pro-government forces and rebels were locked in fierce clashes on Sunday around the western edges of Aleppo, where 38 civilians have been killed in two days of opposition rocket fire, a monitor said.

Among those killed over the two-day period were 14 children, said the Syrian Observatory for Human Rights.

The Syrian state news agency, SANA, said on Sunday morning that rockets fired by "terrorist groups" had killed a man and a child, also injuring six others, in the western districts of al-Hamdaniyah and al-Meridian.

A total of 250 civilians are thought to have been wounded since Friday morning, when a coalition of anti-government factions announced the start of an offensive to break a government-imposed siege of eastern Aleppo.

An Aleppo hospital director was quoted by state media as saying that 36 people - including soldiers and civilians - had been treated for suffocation.

"Rebel fighters have launched hundreds of rockets and shells onto the western districts from positions inside the city and on its western edges," said Observatory head Rami Abdel Rahman.

On Sunday morning, rebels said they were preparing to launch an offensive on al-Assad Academy of Military Engineering, a military college on the outskirts of the city that is now considered one of the most important hubs for government fighters in the area.

Rebels seized control of most of the al-Assad district on the first day of the assault.

Now, they are attempting to push further eastwards into al-Hamdaniyah, which is directly adjacent to rebel-held neighbourhoods of eastern Aleppo.

Fighting lasted all night and into Sunday morning, with air strikes and artillery fire along the western battlefronts heard even in the eastern districts, an AFP correspondent there said.

Plumes of smoke could be seen snaking up from the city's skyline.

The offensive has seen an estimated 1,500 opposition fighters mass on the western edges of Aleppo since Friday.

They include local Aleppo rebels and reinforcements from Idlib province to the west, among them Fateh al-Sham Front, which changed its name from al-Nusra Front recently after breaking ties with al-Qaeda.

Fighting has killed 30 government and allied fighters, as well as 50 Syrian opposition militants, according to the Observatory. 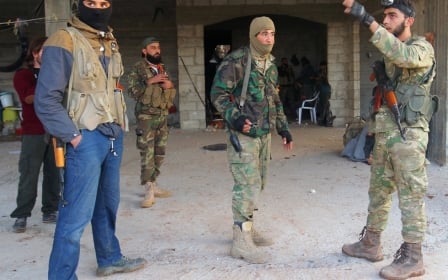