Rifts in Egypt's military echelons may be source of leaks, analysts A deepening rift between former presidential candidate Ahmed Shafiq and current President Abdel-Fatah al-Sisi’s government could be the source of a series of leaked audio tapes that have flooded the media in recent months, analysts have said.

Simmering tensions among Egypt’s ruling elite broke out into the open last week when Shafiq was warned by the government not to return from exile in the United Arab Emirates (UAE) and told not to consider any future role in Egyptian politics.

Shafiq belongs to the same military political camp as Sisi, with the army ruling Egypt largely uninterrupted since 1952. However, commentators are now suggesting that Sisi has begun to view Shafiq as a rival who is conspiring to undermine his presidency, with some going as far as suggesting that Shafiq could have been behind the string of incriminating leaks.

“There are two blocks within the Mubarak-era officials, one of which has been excluded from the government and wants to return, represented by Shafiq and General Sami Annan, said Mohammed Mohsen Abo El-Nour, an Egyptian political analyst specialising in international relations. “The other is [represented by] Sisi and his men.”

Shafiq replaced Ahmed Nazif as prime minister on 29 January 2011,  just days before former President Hosni Mubarak was overthrown by a popular revolution. Shafiq remained in his position for only a month before he was replaced by Essam Sharaf on 3 March 2011. Annan, meanwhile, was the army’s chief of staff until his retirement was announced by Mohamed Morsi, Egypt’s first democratically elected president, on 12 August 2012.

Although Shafiq ran for the presidency in Egypt’s first 2012 presidential vote, he lost out to the Muslim Brotherhood’s Morsi in an election widely seen as free and fair. Shafiq then fled the country after Egypt’s prosecutor-general opened an investigation into allegations of corruption when he was an official under Mubarak.

Morsi was ousted by a military coup on 3 July 2013 following widespread protests. Shafiq was subsequently cleared of corruption charges but he has thus far remained in the UAE.

“Despite their inability to return to taking up government positions, Shafiq and his block managed to direct strong blows at Sisi by releasing those leaks,” explained Abo el-Nour.

Secretly taped recordings of Sisi, in which the Egyptian president revealed how he planned to divert Gulf money into accounts used by the military, were authenticated by independent acoustic experts earlier this month.

“When Shafiq and Annan’s plan to run for president during the 2014 elections, alongside Sisi, were met with strong rejection, the leaks immediately went public,” said Abo el-Nour, who said tight security measures around the government could only have been unlocked by someone from within the military echelons.

According to Abo el-Nour, Shafiq and Annan, along with Jamal Mubarak - previously poised to become Egypt’s president by his father Hosni, before he was ousted in 2011 - belong to a block that expected to be given leadership positions within the government formed by Sisi.

Instead they were surprised to find themselves marginalised along with the opposition.

A number of high-profile businessmen – namely Mohamed Amin Malek, owner of the Egyptian CBC satellite television network and of al-Watan newspaper – are also part of this block, Abo el-Nour explained.

Sharif Nashashibi, a journalist and analyst on Arab affairs, believes that this division appeared during the run-up to the presidential elections last year when, in a leaked recording, Shafiq said he would not run in the elections because it would be a farce in Sisi’s favour.

“[Although] Shafiq subsequently supported Sisi, it’s likely that Sisi has since been extremely wary of Shafiq, not least because Shafiq served under Mubarak and could pose a threat from within the military establishment,” said Nashashibi. “There is unlikely to be complete harmony within any military establishment, especially in Egypt’s case given the security situation, lack of stability and the poor state of the economy – things Sisi had promised to relieve and so far he hasn’t succeeded.”

“The longer this goes on, the more likely the military establishment will be looking for alternatives to replace Sisi instead of holding elections and potentially losing their grip on power,” he added.

Nadia Abou el-Magd, an Egyptian journalist and political analyst, also believes that cracks could be appearing within the military. She argues that while Shafiq doesn’t pose a real threat to Sisi - seeing as he is based in the UAE – local media reports can be seen as an indication that the government and Sisi’s leadership are vulnerable. While a large section of the media has tended to be very supportive of Sisi generally, recently there has been more negative reports.
Last month, Ibrahim Eissa, an Egyptian media commentator and talk show host, spoke out about the need for "accountability" while the government owned al-Watan newspaper published a piece discussing the various obstacles underpinning Sisi's reform plans, such as corruption.
“Sisi is dealing with any kind of potential challenge to his legitimacy, whether real or imagined, as an existential threat,” said Abou el-Magd.
“Although we cannot confirm who is behind the leaks, we can say they are the doing of people from within the military establishment. These people are, for the very least, unhappy with the way the country is headed.”

“It is therefore very clear that the current government is unsustainable and they [military establishment] is looking for an alternative from within its echelons,” she added.

And while reports were circulated in Egyptian media of a secret meeting between Shafiq and leaders in the Muslim Brotherhood, a source from within the group denied that these reports were true.

“The reports are completely unfounded. Although the dispute between the opposition and Sisi is much deeper, there is a long-standing enmity between Shafiq and the revolutionaries,” said a source from within the group, reported Arabi21.

According to Abo el-Nour, the rift between Sisi and Shafiq acts to complement the efforts of the Brotherhood that have been leading a fierce battle against the military government since the 2013 coup. The group has widely circulated reports on the rift among the Mubarak-era figures, as it had also widely published reports on the audio leaks. 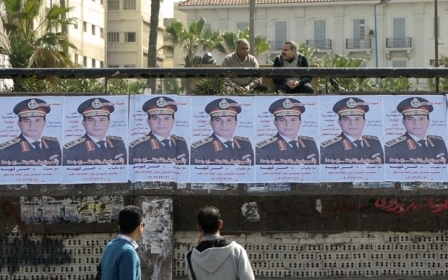