Al-Hassi says the GNC has not responded to his requests for a cabinet reshuffle; critics say he has been a slow decision maker The Prime Minister of Libya’s rival Tripoli-based government Omar Al-Hassi has said he will not accept his dismissal unless his “revolutionary partners” agree.

Hassi was dismissed on Tuesday by the parliament in the capital - the General National Congress (GNC). Parliamentary spokespeople said the move came after it received reports from the Audit Bureau and after 70 GNC members and more than 10 cabinet ministers requested his dismissal.

Hassi, however, said late Tuesday that he would not accept the ruling unless it was agreed by his “heroic revolutionary partners” and those with whom he formed the government last year.

“I will begin a wide consultation with them, so my acceptance wouldn’t be an individual decision that might cause harm or have any bad effects on my revolutionary comrades on the front lines,” he said, speaking at a press conference in Tripoli last night.

Hassi said it was not possible to discharge a head of government without first questioning him or providing him with a budget - expected to be $27.7bn - neither of which had taken place.

“The National Salvation Government has not yet been provided with the required budget and, despite this, has provided food, medicine, security, electricity and fuel to all Libyan people,” Hassi said. It had also provided support for the revolutionaries, and transported wounded people for treatment abroad, he added. “Members of the respected GNC were meant to be discussing the proposed budget,” Hassi said.

He said he is seeking legal advice from constitutional law experts to ensure that all procedures had been followed properly.

“I will only obey this decision if it is accepted by my main partners of this government and from the brave revolutionaries,” Hassi said, adding that he would use his constitutional right to object to, or appeal against, the decision.

Hassi levelled further criticism at the GNC, saying that it had failed to respond to his repeated requests for a cabinet reshuffle.

The director of the foreign media department in Tripoli, Jamal Zubia, told Middle East Eye that 14 out of 27 ministers in the Tripoli cabinet had requested the dismissal on the basis that they believe Hassi is a very slow decision maker.

“Many of these ministers had even stopped attending cabinet meetings so this is the end of the road [for him],” he said, speaking on behalf of the government in absence of an official spokesman. “The GNC decided to do the job as soon as possible because it can’t suspend the fate of the country for one person.”

GNC spokesman Omar Hamaidan said some ministers had threatened to resign unless Hassi was dismissed.

Hassi has been replaced by first deputy premier Khalifa Al-Ghwail who will act in a caretaker role for the next month. During this time, the GNC will either choose a new prime minister or extend the mandate of Ghwail, Hamaiden said.

Ghwail is an engineer and businessman from Misrata and has been part of the Tripoli government since it was set up by the GNC in September last year following the takeover of the capital by a militarised-political movement called Libya Dawn.

Ghwail is likely to continue the controversy sparked by what some have seen as the Tripoli government’s lenient attitude towards the US and UN-designated terrorist organisation Ansar al-Sharia, some members of which have pledged loyalty to the Islamic State.

In an interview with The Nation in February, Ghwail said neither Ansar al-Sharia nor other groups fighting in Benghazi were terrorists or extremists. Those battling against Libyan National Army forces led by General Khalifa Haftar under the Western-recognised government and parliament now based in eastern Libya are “revolutionaries”, Ghwail said.

The change of leadership comes just days after Tripoli forces withdrew from an unsuccessful three-month operation to take control of the country’s largest oil export terminals.

Divisions within the Tripoli-based powers have been increasingly emerging, with political and military narratives differing on the threat posed by forces loyal to the Islamic State (IS), which has taken advantage of Libya’s instability to gain a strong foothold on the edges of western Libya. Despite IS videos and publications claiming responsibility for a range of attacks in the country, including on the five-star Corinthia Hotel in January, the Tripoli-based government has insisted that the group mainly consists of former members of the Gaddafi regime.

Under the Tripoli government, armed groups from the city of Misrata have conducted some military operations against IS fighters in Gaddafi’s hometown of Sirte and the small desert town of Nufaliya. However, local people say the militants still remain in control of both towns. 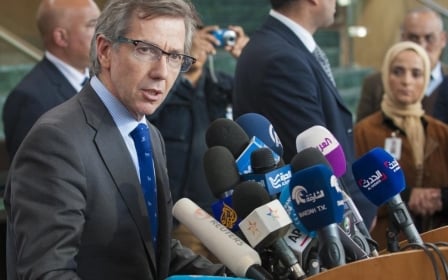