Iran's Rouhani at UN: No talks with US without sanctions relief 'Security shall not be supplied with American weapons and intervention,' Rouhani says at UNGA (Reuters)
By
MEE staff

Iran will not engage in direct negotiations with Washington while the country is under sanctions, President Hassan Rouhani said, a day after his American counterpart Donald Trump pledged to double down on his "maximum pressure" campaign.

Speaking at the UN General Assembly on Wednesday, the Iranian president said Tehran's "response to any negotiations under sanctions is negative".

Trump pulled the US out of the 2015 multinational nuclear deal with Tehran last year, and his administration has since imposed crippling sanctions on Iran.

About 24 hours before Rouhani's speech, Trump tried to rally the world against Iran from the same stage.

'Memorial photos are the last stage of negotiations, not the first'

"All nations have a duty to act. No responsible government should subsidise Iran's blood lust. As long as Iran's menacing behavior continues, sanctions will not be lifted. They will be tightened," Trump said on Tuesday.

The Iranian leader, however, did not rule out talks with Washington.

He called for the two countries to return to the negotiating table without sanctions, urging Washington to abide by the framework of the original agreement and adding that the US should "pay more" if it wants a wider nuclear deal.

"The only way for talks to begin is to return to commitments and compliance," he said. "Stop the sanctions, so as to open the way for the start of negotiations."

Rouhani also said he was not interested in meeting Trump or top US officials in the early stages of talks.

"Memorial photos are the last stage of negotiations, not the first," he said.

American and Iranian presidents have not met since the Islamic revolution in Iran in 1979. Rouhani did have a phone call with Trump's predecessor Barack Obama in 2013.

Later on Wednesday, US Secretary of State Mike Pompeo responded to Rouhani's speech, repeating Trump's call to mobilise the world against Iran and accusing the Iranian leader of being deceitful.

"Rouhani is desperate to deceive because the world is awakening to the truth. The truth is that Iran responds to strength and not to supplication," Pompeo said at an anti-Iran meeting in New York.

"More and more nations are beginning to stand up to Iran's thuggish behavior, and disengaging economically. We will ensure that all of them do." 'They will be tightened': At UNGA, Trump doubles down on Iran sanctions
Read More »

US-Iran tensions increased in the weeks leading up to the UN summit, with Washington and its allies blaming Tehran for a series of attacks in the Gulf this past summer.

On Monday, France, Britain and Germany issued a joint statement saying it was clear that Iran was responsible for the attack, but also calling for a return to the negotiating table.

German Chancellor Angela Merkel and French President Emmanuel Macron said they both planned to meet separately with Trump and Rouhani on the sidelines of the UN gathering.

Pakistani Prime Minister Imran Khan also jumped into the fray, telling reporters that Trump had asked him to mediate with Iran to defuse tensions. There have been no previous reports of Pakistani mediation efforts, and Trump had said that he was not looking for interlocutors with Iran.

"Trump asked me ... if we could de-escalate the situation and maybe come up with another deal," Khan said after meeting both Trump and Rouhani, Reuters reported.

Iran has denied responsibility for the recent attacks on Saudi oil facilities as well as on oil tankers passing through the Strait of Hormuz earlier this summer.

Rouhani used his speech at the UN to invite Gulf countries to join what he termed the "Coalition of HOPE", which he said stands for the Hormuz peace endeavor.

"The goal of the Coalition of Hope is to build peace, stability, progress, and welfare for all of the residents of the Strait of Hormuz region," Rouhani said.

He added that the initiative would call for energy security and the free transfer of oil through the strait. Still, the Iranian president used the announcement to take a jab at the US role in the region.

"The security of our region shall be provided when American troops pull out," Rouhani said.

"Security shall not be supplied with American weapons and intervention." 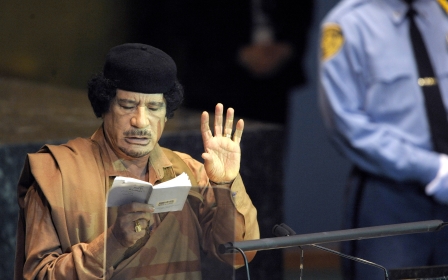