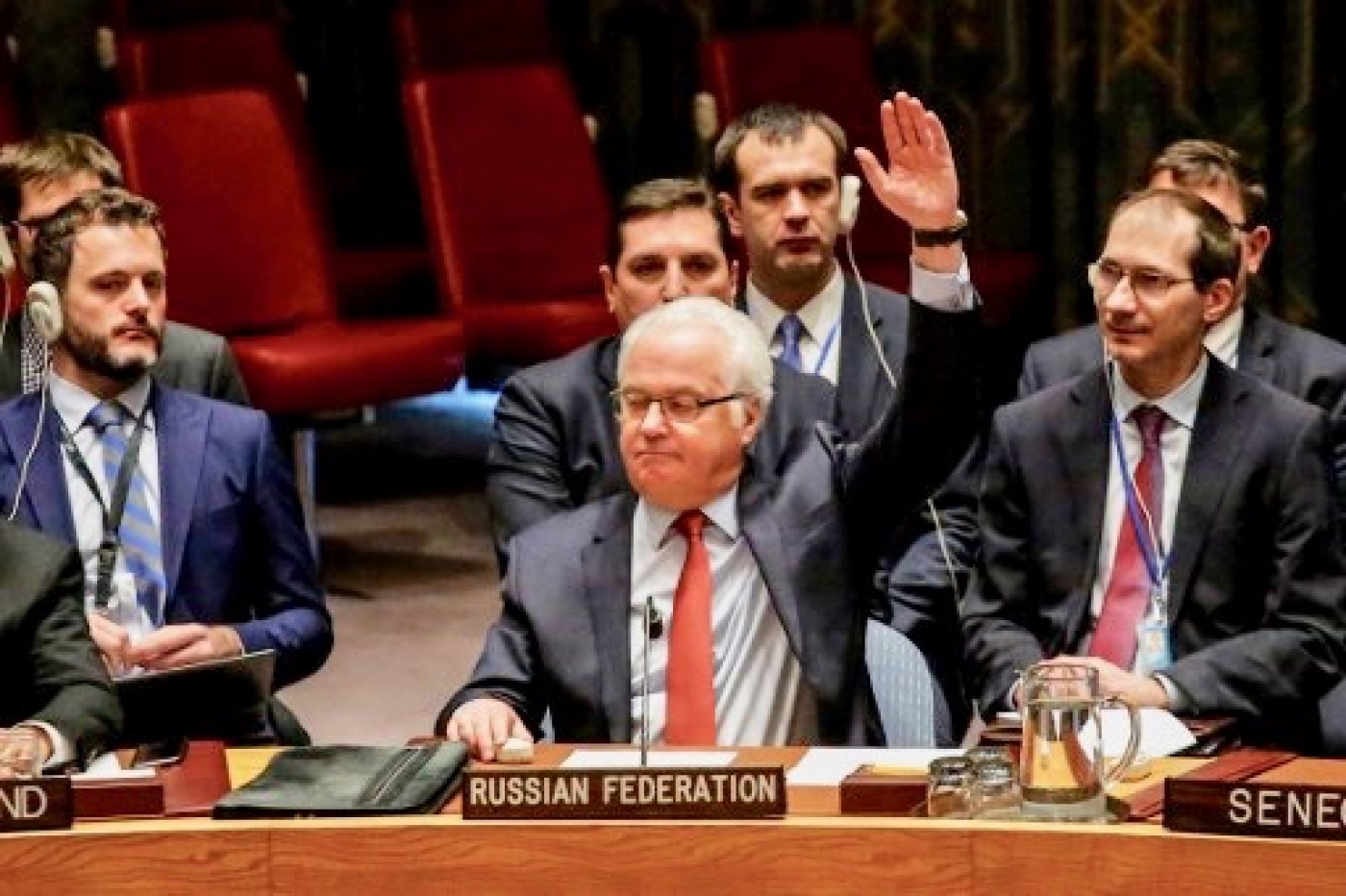 Russian Ambassador to UN Vitaly Churkin votes at Security Council on Russian-Turkish peace plan for Syria on Saturday at UN Headquarters in New York. The vote was unanimous for the ceasefire. (AFP)
By
AFP

A ceasefire held across most of Syria on Saturday as Russia and Turkey secured unanimous passage of a UN resolution backing their efforts to "jumpstart" talks aimed at ending the nearly six-year conflict.

The Security Council resolution aims to pave the way for talks next month in the Kazakhstan capital of Astana, under the aegis of Russia and Iran, both Syrian government supporters, and of rebel backer Turkey.

Turkey and Russia say the Astana talks will supplement, not replace, UN-backed peace efforts, including talks set to resume 8 February in Geneva.

The text of the UN measure "welcomes and supports the efforts by Russia and Turkey to end violence in Syria and jumpstart a political process" and it calls the Astana talks "an important step" ahead of the upcoming Geneva negotiations.

It also calls for the "rapid, safe and unhindered" delivery of humanitarian aid in Syria.

Russia and Turkey brokered the current ceasefire and, while backing opposing forces in the conflict, have been working increasingly closely on Syria, including to allow evacuations from the besieged city of Aleppo.

Russia's UN ambassador Vitaly Churkin had earlier voiced hope the Security Council would endorse the planned talks in Kazakhstan and back the resolution unanimously.

The Syrian Observatory for Human Rights, a British-based monitor of the war, said Saturday that most of Syria remained calm, despite limited clashes.

The government in Damascus called the ceasefire a "real opportunity" to find a political solution to a war that has claimed more than 310,000 lives and displaced millions since it began in March 2011 with protests against the government of President Bashar al-Assad.

Limited clashes continued in some parts of Syria on Saturday, including around Wadi Barada near Damascus, and the southern city of Daraa, where one opposition fighter was killed.

Happy New Year World. May it bring peace to all Syria. pic.twitter.com/Yi8FYvjrVk

The fighting in Wadi Barada has led to water shortages that have affected four million people in the capital.

Five rebel fighters and two civilians have been killed in Wadi Barada and the rebel bastion of Eastern Ghouta near Damascus since the truce started on Friday, said Syrian Observatory director Rami Abdel Rahman.

The forces in Wadi Barada include Fateh al-Sham Front, previously known as al-Nusra Front. That group and the Islamic State (IS) group are excluded from the truce.

Rouhani said "vigilance" was needed to ensure that the rebels not reorganise.

The official IRNA news agency also quoted Shamkhani as warning that any political solution to the Syria conflict must not lead to "the weakening" of the Damascus government.

Russian President Vladimir Putin has said he would reduce Moscow's military contingent in Syria, which has been fighting to bolster the government since last year.

But he added Russia would continue to fight "terrorism" and maintain its support for Assad's government.

It said the officers were part of a security patrol that stopped the bombers, who then blew themselves up. Others were wounded in the blasts, including civilians, state TV said. It gave no further details.

British-based monitoring group the Syrian Observatory for Human Rights said there had been explosions from suicide bombers in Tartous and that at least two people were killed.

Tartous has not been targeted for several months, and has largely escaped the violence that has engulfed other areas of the country.

The city is part of President Bashar al-Assad's coastal heartland.