Russia: No moderate rebels in Syria

Rebel fighters run during a battle against Syrian government soldiers in Handarat, on the northern outskirts of Aleppo, on 24 October, 2014 (AFP)
By
MEE and agencies

Russia has said it can find no moderate armed opposition to support in Syria, a day after President Bashar al-Assad reportedly told his Russian counterpart that he would talk to any that could be found.

In a statement on Friday, Vladimir Putin's spokesman said: "From the very beginning of the Syria operation, President Putin and other representatives of Russia have spoken of our readiness to cooperate with the so-called moderate opposition.

"We have been unable to single out the so-called moderate opposition. There is not a single central force which one could cooperate with.

"All the difficulties arise from this. Neither our American nor our European colleagues, nor others are so far able to help us with identifying them."

The statement came as Russia continued its bombing campaign in Syria, which it says is aimed at "extremists" including the Islamic State group, despite many of Russia's bombs falling on areas where the group has no presence.

But speaking at a political conference in Sochi on Friday, Putin accused Western governments of double standards in its choice of groups to work with.

"Let's not play with words and divide the terrorists into moderate and not moderate," he said.

"I would like to understand what is the difference. Perhaps, some experts believe that moderate bandits behead people in moderate numbers or in some tender way."

Putin this week hosted Assad for a summit at the Kremlin, the Syrian president's first known foreign trip since unrest erupted in his country in 2011.

On Thursday, the Russian president said Assad had told him he was ready to talk to armed opposition groups if they were really committed to fighting IS.

The UK-based Syrian Observatory for Human Rights meanwhile said that a total of 446 people, more than a third of them civilians, had been killed in Russian air raids since 30 September.

Of the total killed since then, 151 are civilians and include 38 children and 35 women, the activist group said. The strikes have also killed 295 fighters, including 75 IS members and 31 members of al-Qaeda's Syrian affiliate, Jabhat al-Nusra, the Observatory said.

Middle East Eye could not verify the accuracy of the Observatory's figures. Moscow has dismissed previous reports by the Observatory of civilian casualties from its bombings as "fake".

Peskov's remarks came as Russia's Foreign Minister Sergei Lavrov went into key talks on the Syrian crisis with US Secretary of State John Kerry in Vienna.

Earlier this month Russia said it was ready to establish contacts with Syria's main Western-backed moderate opposition group, the Free Syrian Army, to find a political solution to a crisis that claimed more than 250,000 lives since 2011. 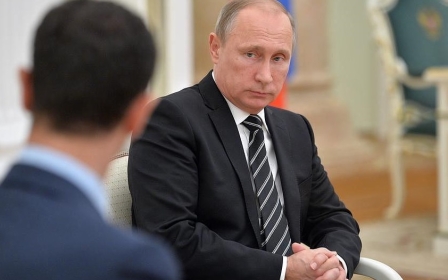