Restaurants in the Yemeni capital donate food to thousands of people, as the conflict worsens an already precarious humanitarian situation Like many Yemenis, Abdul Rahim Mohammed relies on the goodwill of local restaurants for his subsistence and that of his family (MEE/Zakaria Dahman)
By
MEE correspondent

SANAA - When Abdul Rahim Mohammed lost his job working as a guard for a warehouse in the Yemeni capital Sanaa in 2016, the middle-aged man was left struggling to provide for his wife and six children.

Without a regular source of income amid a three-year war that has ravaged what was already the poorest country in the Arab world, Mohammed, who lives in a small house in the al-Mahwa neighbourhood at the heart of the city, has had to look for outside assistance for help.

"This war has not left anything beautiful in Yemen, but it leaves thousands of people in dire need of food,” he said.

Unable to subsist on modest aid rations alone, Mohammed and many other Yemenis have instead turned to charitable schemes run by restaurants, as many credit such solidarity for easing the hardships of thousands of impoverished citizens.

Lines for rice and soup

Al-Taizi, found on Amman Street in the centre of Sanaa, is one such restaurant.

Often bustling with customers, who flock to taste the restaurant’s famous aseed – a dish from southern Yemen’s Taiz consisting of a large dumpling served with broth – it’s also common now to see dozens of Sanaa’s poor lining up outside.

Some of them have bags in their hands to carry donated food, while others bring their children with them.

For an hour every morning, al-Taizi’s owner Lufti al-Azazi and his staff serve around 50 families aseed, rice, soup and, on occasion, chicken. On Thursdays, they cater for an additional 250 families who come from the outskirts of Sanaa.

"It is a crime to see hungry people and not help them. God commands us to help needy people,” Azazi told Middle East Eye. “This is part of our religion, so we do it to go to heaven.”

"All Muslims should feel the suffering of needy people and help them, and they will find that positives in their lives will only increase through charity.”

Azazi used to help people even before a Saudi-led military coalition intervened on behalf of Yemen’s government against Houthi rebels in 2015.

Now, however, the number of impoverished in the Yemeni capital has swelled.

The United Nations estimates that an alarming 22.2 million out of Yemen’s 29 million-strong population are in need of some kind of humanitarian assistance.

Around 17.8 million are food insecure, 8.4 million of which are at risk of starvation. Some 16 million, meanwhile, lack access to safe water, which has contributed to a cholera epidemic estimated to have affected as many as a million Yemenis.

Employment has also been badly affected by the war, as the economy worsens and competing authorities wrangle over who controls the central bank and other state institutions.

As a result, many have been out of work or found their salaries unreliable or insufficient to make a living.

Around 1.25 million civil servants have either failed to receive their salaries or only been paid sporadically since August 2016. Meanwhile, prices of essential goods have doubled compared with before the war.

Mohammed and his family spent several weeks suffering intense hunger when the pharmaceutical company he was working for shut down, leaving him unemployed.

International NGOs have helped them over the past two years with food donations - rice, wheat, oil, sometimes sugar – but they remained insufficient to eke out a living for his wife, two sons and four daughters.

"I lost my work as a guard and my body is weak, so I cannot work hard jobs,” he said. “Some people like me resorted to begging, but I prefer not to beg. Death is better than begging for me.

"But then a friend told me that there are some restaurants that provide needy people with free food and he gave me their names."

When Mohammed first visited a charitable restaurant, he was too embarrassed to ask for food. Luckily a waiter approached him and told him not to be shy and stand in the queue to receive something.

Now he stands alongside hundreds of others every day outside restaurants across Sanaa.

"The waiters do not insult needy people, rather they respect them and provide everyone with food, so I do not feel embarrassed to receive my food from them," he said.

First he waits outside al-Taizi, then moving on to other restaurants – such as al-Raqi and al-Moaalem - to obtain enough for his family of eight people.

"Each restaurant provides us with enough food for three people maximum, so I receive food from two or three restaurants each day,” Mohammed said.

Displaced swell the ranks of the needy

Impoverished natives from Sanaa aren’t the only people to find respite at these restaurants.

"I have been receiving food from restaurants for two years, and every day more people come to the restaurants," Mohammed said.

As of March, the United Nations estimated that more than two million people were displaced by fighting in Yemen.

Many of them have fled to Sanaa, especially since pro-government forces began an operation to take the strategic Red Sea port city of Hodeidah, 150km to the capital’s west.

Around 50,000 households have been displaced from around Hodeidah, according to the UN.

Um Salem, a displaced woman in her 30s, fled Hodeidah with her three children in late June when fighting reached her neighbourhood near the airport.

'If not for those restaurants, many people would starve to death'

Though she does not have any relatives in Sanaa, Um Salem travelled to the city with her neighbours, who told her that there would be organisations there to help displaced people.

When she arrived, she was shocked to find a lack of international NGOs providing aid, and struggled to secure food and shelter for her family.

Instead she has had to rely on local kindness and initiatives.

"A philanthropist rented a small house in Sobahah area for my family, but there is no one to help us to get enough food. Organisations have provided us with food, but it is not enough for the whole month," she told MEE.

"Some displaced people told me that restaurants help needy people, so I visit those along with my children to get enough for all of us."

Another woman displaced from Hodeidah, Um Mohammed, stands in the queue to receive food with her three children, because some restaurants distribute food only to those who come in person.

"If not for those restaurants, many people would starve to death,” she said.

Um Mohammed's husband divorced her and married a new wife, and now refuses to support his children, so she alone is responsible for providing for her family.

When she was in Hodeidah, she used to work as a housekeeper for around 1,000 Yemeni rial per day ($3.10), a job she hopes to resume in Sanaa once she has developed the right contacts.

"There is community solidarity in Sanaa, which is a good trait of Yemeni people,” she said.

But once she does find work, Um Mohammed intends on never standing in line outside a restaurant for free food again.

Community solidarity as a guardrail

In times of war, expressions of solidarity and charitable initiatives are hugely important, according to Fadhl al-Thobhani, a sociology professor at Taiz University.

“The wealthy have to help the needy during war, or the number of people starving to death will hit unbelievable heights,” he told MEE.

“Yemenis empathise with the needy’s suffering,” he added. "Community solidarity also prevents many people from joining the fighting or engaging in bad behaviour such as stealing."

'There is community solidarity in Sanaa, which is a good trait of Yemeni people'

Walking between restaurants seeking sustenance for his family, Mohammed also acknowledged the schemes’ key role in keeping the most vulnerable Yemenis alive.

"I thank all restaurants that help needy people as they are playing a major role in helping many families, but I do not want to continue receiving food forever,” he said, adding that his 15-year-old son Khaled would soon be able to look for work to help provide for his family.

“I trust that God will not forget us in this war," Mohammed said. 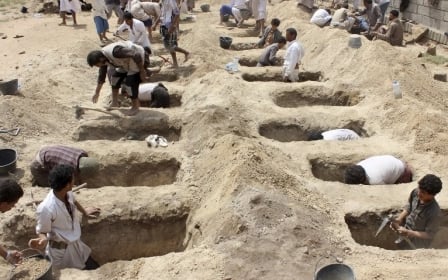 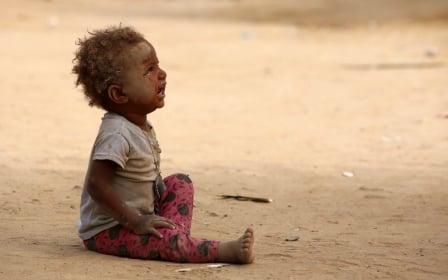