'The Sarraj government is not legal', says Libya parliament leader

Aguila Saleh, the president of the Libyan House of Representatives, on why he thinks the UN-backed Skhirat agreement is a 'sham' Aguila Saleh, president of the Libyan House of Representatives, based in Tobruk
By
Maryline Dumas

Six years after the 17 February revolution in Libya, political and military rivalries continue to divide the country. The UN-brokered Government of National Accord (GNA) has not managed to establish its authority.

Aguila Saleh, president of the Tobruk-based House of Representatives (HoR), the legislative body officially recognised by Western powers, rejects the authority of the government that was formed under the terms of the Skhirat agreement.

Middle East Eye: The House of Representatives (HoR) has yet to ratify the December 2015 Libyan Political Agreement signed in Skhirat [Morocco]. Why?

Aguila Saleh: The so-called agreement is a sham. The delegates who attended the Skhirat discussions did not represent Libya. They were hand-picked by Bernardino Leon [head of the UN support mission in Libya until November 2015] and his successor Martin Kobler to impose a list of names on the Libyan people. The delegation of the General National Congress [the GNC parliament, elected in 2012 and based in Tripoli] withdrew before the end of the negotiations, for that matter.

‘The so-called agreement is a sham. The delegates who attended the Skhirat discussions did not represent Libya’

The fact is the delegates who signed the agreement did not represent the Libyan people. And since formal approval by the House of Representatives was a precondition of the agreement, they had no right to sign the agreement in the first place. Oddly enough, Fayez al-Sarraj [president of the caretaker Government of National Accord established in Skhirat] was not approved by either the HR or the GNC, or by any other official institutional body.

Lastly, the Libyan Political Agreement requires that the terms of the accord be included in the Constitutional Declaration. This is not the case, so the agreement is invalid. Today, we are focusing on promoting discussions among Libyans.

EXCLUSIVE - Abdelhakim Belhadj: 'Libya will never be ruled by a military government'

MEE: Where do these negotiations currently stand?

AS: The Libyans have made it clear. The people should decide who will lead their country. Libya has an extremely complex social structure divided along tribal lines. Decisions in Libya are taken by tribe leaders, so we need their support to build momentum for change.

MEE: Is it a way of refuting the actions of the UN and its representative in Libya?

AS: Martin Kobler’s mistake was that he didn’t choose the right people, the people who can really make things change. We don’t have political parties here. The rivalry between the GNC and HoR was not that bad at first. Kobler’s intervention only aggravated tensions and made the situation worse.

We hope Mr Kobler will leave office soon because he hasn’t been able to get results. We are a member of the United Nations and, as such, we are in favour of UN assistance. But we would like to have a say in choosing our UN representative. We don’t want an administrator or a judge – Libya is not under foreign rule. And we do not want to give up our independence.

MEE: Yet you are receiving support from other countries, including Russia, Egypt and France...

AS: We are receiving logistical support from France. I’ve had no direct contact with the French government because I’ve never had the opportunity to visit the country. I have been to Russia, however, and the Russians have a good understanding of the current situation in Libya. They have promised to support the Libyan army in the fight against terrorism and to work directly with our parliament and government.

They also agreed to share their knowhow with the Libyan National Army [under General Khalifa Haftar, a supporter of the Tobruk-based parliament] and to provide medical aid to our wounded soldiers. The same goes for Egypt and the United Arab Emirates, who have also proven to be very cooperative.

MEE: Why has the House of Representatives failed to establish itself on the international stage?

AS: At the time of the parliamentary elections [June 2014], the House of Representatives was officially recognised by the United Nations. We are the parliament representing all of the Libyans. But after the landslide defeat of the Islamists, they challenged the results and demanded its dissolution.

Meanwhile, in Tripoli, the Fajr Libya militia [the Libya Dawn movement that took power in the capital in 2014] destroyed our vital institutions. From then on, the UN began discussions with them on the same level as the parliament. Yet when the HoR appointed a Central Bank president and new ambassadors, in line with our legislative function, the UN refused to work with them, maintaining nonetheless that the HoR was the country’s only legitimate parliament. It came down to a question not of legitimacy but of territorial control, the UN claimed.

Look at a map of Libya today and you will see that 80 percent of the country is under our control. But the UN has yet to change its stance.

MEE: Yet the mandates of both parliaments, the Tripoli-based General National Congress and the Tobruk-based House of Representatives, have expired...

AS: No. That’s not true. The Constitutional Declaration, which specifies the provisions of Libya as a state, stipulates the term lengths and the responsibilities of the governing authorities. The term of the House of Representatives was set at 18 months. But according to the Constitutional Declaration itself, the Libyan parliament has the right to alter it. Therefore, in accordance with this provision, we decided to change the length of the parliamentary mandate. We didn’t want to create a political void, so we extended the mandate until another legislative body could be elected.

‘I envision a Libya that is unified, not centralised, like it was in the past. Libya should not be divided’

AS: The new constitution must be ratified first, because the constitution defines the principles and the rules upon which the parliament and the government are based. I’m hopeful that the Constituent Assembly will draw its conclusions soon. There is a good chance of it. But if it doesn’t happen in the near future, our parliament has another option: to change the Constitutional Declaration and perhaps elect an interim president.

MEE: What kind of state do you envision for Libya?

AS: I envision a Libya that is unified, not centralised, like it was in the past. Libya should not be divided. This vision will eventually be a reality, once terrorism is defeated, because we make up a single community with very close ties.

MEE: Does this include the supporters of Muammar Gaddafi, many of whom are in exile today?

AS: The House of Representatives ordered the release of everyone who worked under Muammar Gaddafi. And we cancelled the GNC’s enactment preventing members of the Gaddafi regime from holding public office [Political Isolation Law, voted in 2013]. All Libyans are equal in terms of rights and duties. In Libya, we can elect anyone, even someone who was close to Muammar Gaddafi.

MEE: In early February, Fayez al-Sarraj signed a bilateral agreement with the European Union to curb a new wave of migrants. Do you agree with these measures?

AS: We will not agree to any political project or accord concluded without our participation. The government of Fayez al-Sarraj is not a legal government. It was not ratified by Libya’s parliament. We have rejected it twice. The same rule applies all over the world: governments are not officially recognised until validated by parliament. I also wanted to add that Islam forbids us to mistreat other people.

The HoR strictly rejects any attacks on human rights. The ill-treatment of migrants in Libya, which has been frequently reported on, has only occurred in areas not under our control. 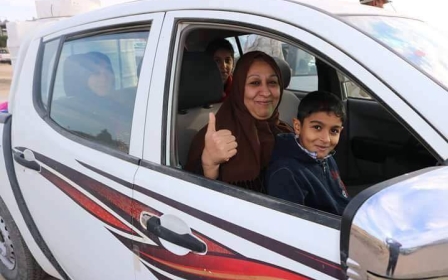