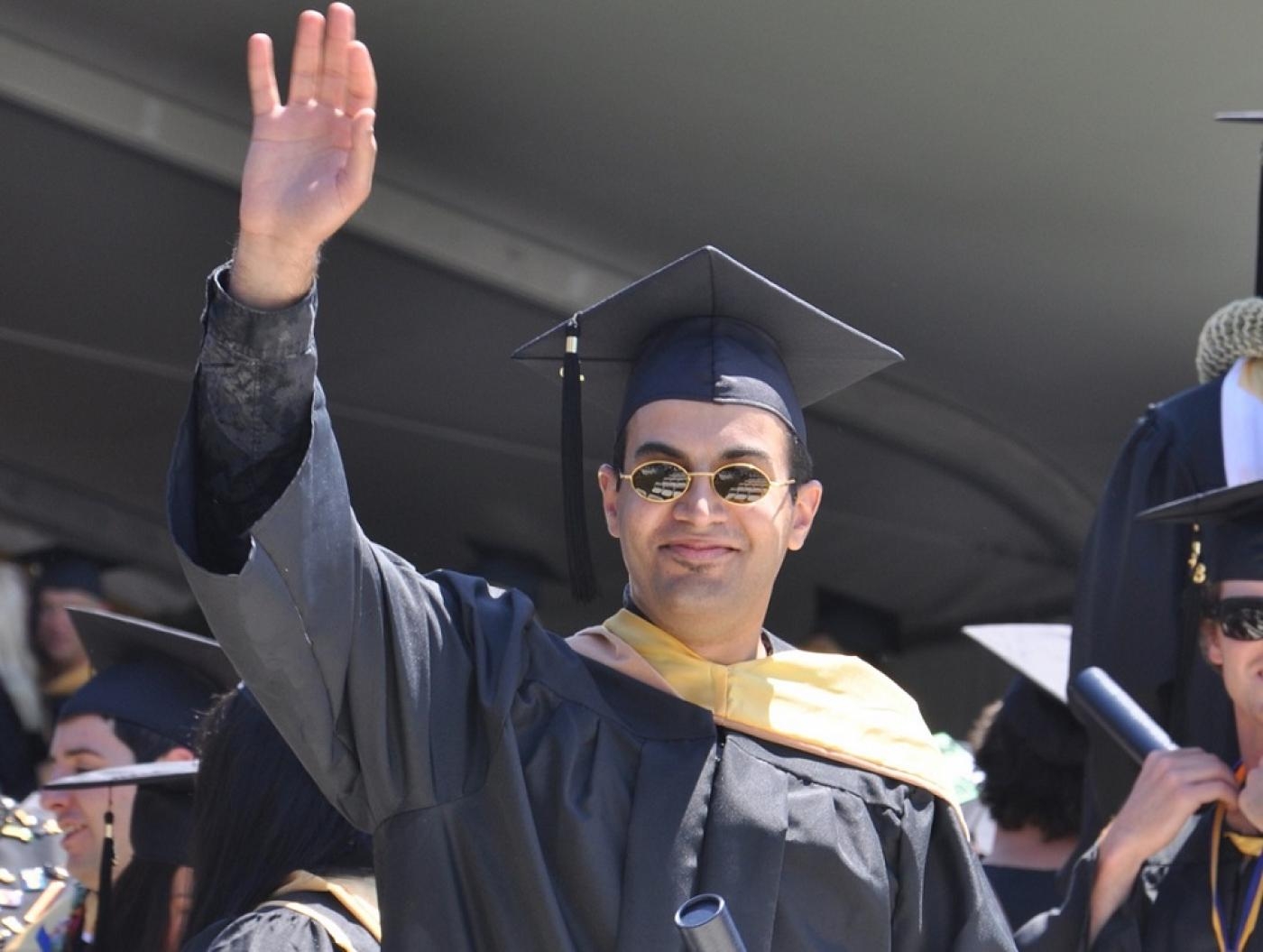 One year ago, detained Saudi aid worker Abdulrahman al Sadhan spoke to his family for the first time in 23 months. The phone call lasted a single minute.

"It was amazing to finally hear from him because at least we knew he was alive," his sister, Areej al-Sadhan, told Middle East Eye. "After Khashoggi, you just never know," she said, referencing the 2018 murder of journalist Jamal Khashoggi at the Saudi consulate in Istanbul.

Areej's brother was arrested on 12 March 2018 from the Red Crescent offices in Riyadh, where he worked. He was detained without a warrant or charges against him, and his family initially knew nothing of his whereabouts.

It was only until a month had passed that authorities told Sadhan's family that he had been detained, providing no further information. Despite their concerted efforts chasing up Saudi officials, they did not hear from him again for nearly two years, until a very brief phone call on 12 February last year.

"The only information we got from him was that he was in al-Hair prison," Areej, who is based in the United States, said, referring to the notorious maximum security facility 25km south of Riyadh which holds scores of political detainees.

"We could hear someone telling him your minute is up, and immediately the line was cut; dead silence," she said. "From the manner of the call, it felt like he was in a cruel environment."

Twelve months on from the 60-second conversation, Sadhan's family have yet to hear from him again.

"We were hoping that the phone call was going to be the end of his enforced disappearance and we'd hear from him again. But now a year has passed, and there have been no calls and no visits," Areej said.

"Why do they continue to disappear my brother? What are they hiding? If there are charges, why don't they tell us what these are?"

While no charges have been brought against Sadhan, his detention is believed to be linked to an anonymous Twitter account he ran, from which he commented on human rights and social justice issues in Saudi Arabia.

The use of unnamed profiles is a common practice in the kingdom, where free speech is heavily curtailed and dissenting voices are cracked down upon. In 2015, two former employees of Twitter, Ali Alzabarah and Ahmad Abouammo, were accused of accessing and passing the details of more than 6,000 users critical of Riyadh to a Saudi official with close ties to the royal family. Bloomberg reported in August that Sadhan's disappearance was a direct result of the actions of the alleged Twitter spies.

"To reach a point where they hack foreign companies, use spyware, bribe spies to leak information from a company based in a country that is an ally of Saudi Arabia, is really shocking," Areej said.

Former royal court adviser Saud al-Qahtani used his verified Twitter account to boast in August 2017 that Riyadh had "technical ways" and a "secret I'm not going to say" to track down anonymous accounts.

The former adviser's profile has since been permanently banned for violating Twitter's manipulation policies. He served as a close aide to Crown Prince Mohammed bin Salman until he was removed after being implicated in Khashoggi's murder.

To mark a year since Sadhan last spoke to his family, several human rights advocates and organisations, including MENA Rights Group and ALQST, have used hashtags in English and Arabic to ask "where is Sadhan".

Enforced disappearance is one of the most serious crimes because it creates double suffering: for the victim, but also their family. The wondering, waiting, while ignoring the fate of their loved one, is a form of torture.

"Abdulrahman has been disappeared for nearly three years and was only allowed to speak to his family once for a few minutes a year ago. Not only is this a violation of his most basic rights, but also of those of his family, who are suffering from immense distress due to not knowing where and how he is," Ines Osman, founder and director of MENA Rights Group, told Middle East Eye.

"In November 2018, the United Nations Working Group on Enforced Disappearances wrote to Saudi authorities asking for information on his fate and whereabouts, but the authorities have never responded."

Translation: Abdulrahman al-Sadhan... a year of isolation in prison. It is not humane to isolate prisoners in a darkness in which the family does not know their fate

Rights campaigner Lina al-Hathloul joined the social media campaign, stating that her "heart aches for everyone unjustly imprisoned and their families".

Her sister, Loujain al-Hathloul, was one of two high-profile women's rights activists who were released from prison earlier this week after nearly three years behind bars, Nouf Abdulaziz being the other one.

Fears of torture and ill treatment

"It's important to note that those who are released still don't have full freedom. They are still, in a way, in prison, because they are under travel bans and all sorts of restrictions," Areej said. "But at least they get to see their family."

Hathloul still remains under close scrutiny by the Saudi government, with both her and her parents barred from leaving the country. There has also been speculation that the activist has been threatened with further jail time if she speaks out against the conditions of her detention.

Walid al-Hathloul revealed earlier this week that when his sister Loujain had previously spoken to her family from prison, a stun gun was held to her ear and she would have received an immediate electric shock if she revealed details about torture or ill treatment.

"Walid's comments made me think, is my brother going through the same thing? Did they hold a stun gun next to his ear so he doesn't speak freely? I can only imagine the stress and fear he is under," Areej said. "Just because someone is able to talk on the phone, it doesn't mean they are okay."

She said an anonymous source had told her that her brother had gone on hunger strike at least twice, had been subjected to torture and mistreatment, and spent time in solitary confinement.

"The people who have committed the disappearance and torture of my brother should be brought to justice," Areej said. "Not only have they tortured my brother, but my family too."

"We are US citizens who have been deprived of a loved one and put through psychological torture for three years. It's an endless nightmare, and we are calling on our elected US officials to intervene to save Abdulrahman."

'World leaders have a responsibility'

The decision by Saudi authorities to release a number of rights activists is widely seen as an attempt to win the favour of recently sworn-in US President Joe Biden, who has taken a more critical approach to the kingdom and its rights violations than his predecessor, Donald Trump.

"I was pleased to see that President Biden has focused on human rights issues, and that he even mentioned Loujain's case by name," Areej said.

"It's important for the international community to keep up the pressure. As we've seen recently, US advocacy can make a difference. World leaders have a voice and responsibility. They need to be the voice of the voiceless."

Areej said that, following Biden's election, any announcement by Riyadh that it was making legal and human rights reforms were "empty promises" if not backed up by "real actions".

"If Saudi Arabia wants to show real reform, then the first thing they need to do is release all political prisoners," she said. "Three years of disappearance, and only a one-minute phone call. Enough is enough.

"I hope there will be pressure to release my brother, but also all other innocent people who don't have someone to speak on their behalf."