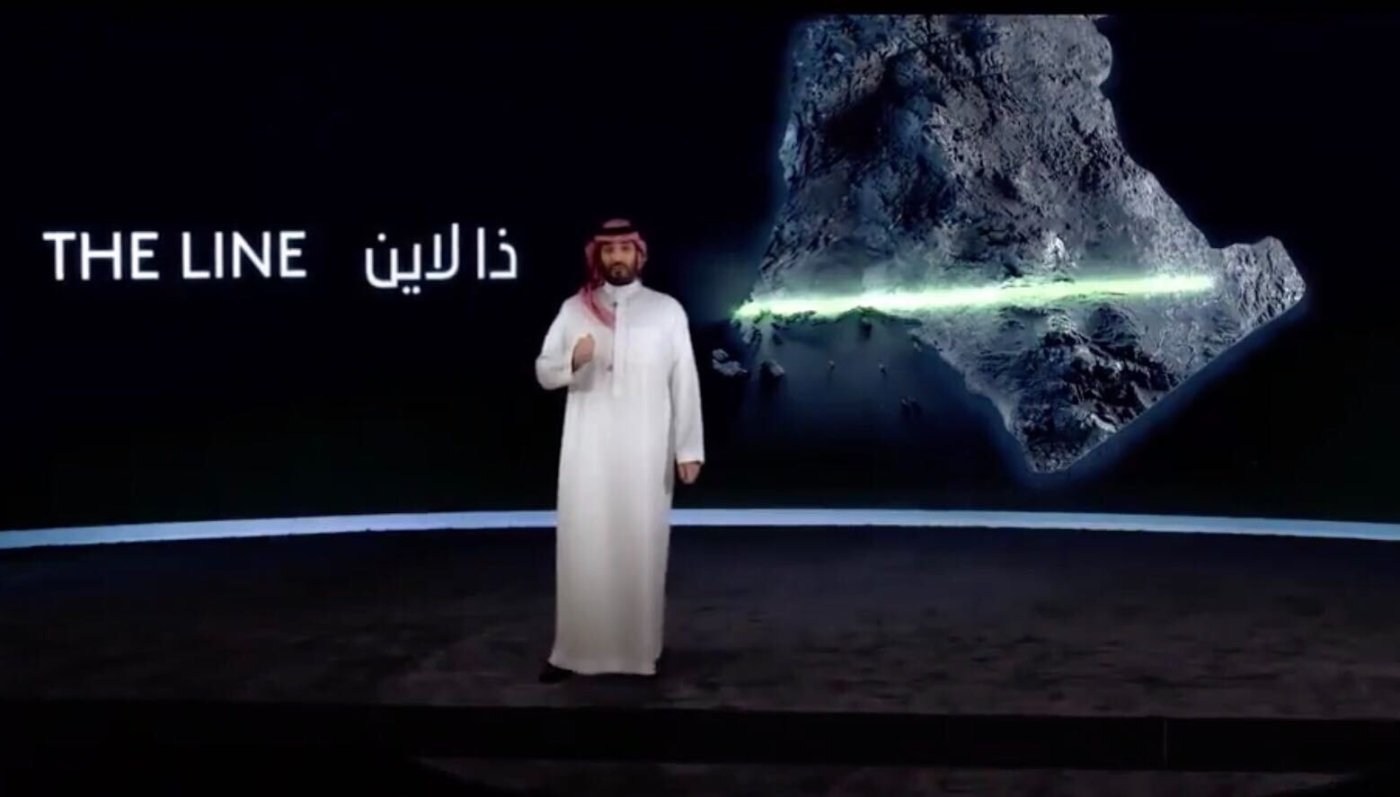 Saudi Arabia has launched an ambitious plan to construct a zero-carbon city built in a 170km straight line, the first major construction project for the $500bn futuristic megacity Neom.

On Sunday, Crown Prince Mohammed bin Salman launched “The Line”, which forms part of the kingdom’s Vision 2030 strategy to diversify its economy and move away from its reliance on oil.

The Line will have no cars or roads and will be populated by one million residents from around the world.

“Why should we sacrifice nature for the sake of development? Why should seven million people die every year because of pollution [...] one million people every year due to traffic accidents?” HRH the Crown Prince questions as he introduces @NEOM’s THE LINE. #whatisTHELINE pic.twitter.com/9GJfsflr67

The announcement for the new project started with a short clip displaying some of human history’s biggest technological advancements over the last century, including the moon landing and the creation of the internet.

It then asked “What’s next?”, and the answer came in the form of a televised address from bin Salman.

"Throughout history, cities were built to protect their citizens. After the industrial revolution, cities prioritised machines, cars and factories over people,” the crown prince began.

“In cities that are viewed as the world's most advanced, people spend years of their lives commuting. By 2050, commute durations will double. By 2050, one billion people will have to relocate due to rising CO2 emissions and sea levels. Ninety percent of people breathe polluted air.

“Why should we sacrifice nature for the sake of development? Why should seven million people die every year because of pollution?”

The de facto Saudi ruler went on to say that to address these concerns, conventional cities needed to be transformed into futuristic ones. He then introduced The Line.

He said that the new 170km city would have “zero cars, zero streets and zero carbon emissions” and that its one million inhabitants could fulfil all their daily requirements, including education and leisure, within a five-minute walk of home.

It was not made clear how or why a city built in a straight line made it easier for people to walk to their desired destinations compared to a conventionally shaped city.

The crown prince also said that it would be possible to travel from one end of The Line to the other in 20 minutes, implying that a very high-speed rail service would be built.

Construction for the project is scheduled to start in early 2021, and the city was expected to contribute $48bn to the kingdom’s economy and create 380,000 jobs, according to a supporting press release. The project itself will cost between $100bn and $200bn, bin Salman told reporters in the northwestern city of al-Ula.

The slick campaign was accompanied by the Twitter hashtag #whatisTHELINE, which featured many positive comments and reactions to the plans.

I am very proud that I'm one the people of the Kingdom of Saudi Arabia.
Our ambition is now beyond the sky#whatisTHELINE pic.twitter.com/Ymw7Lvfpfk

However, not everyone was convinced by the idea, with one social media user calling the project “nonsense”.

“Everything about Neom seems like it was dreamed up by a Saudi official who watched a sci-fi movie on MBC at like 4am and said ‘that looks cool, let's throw $100bn at it’,” journalist Gregg Carlstrom remarked.

“Mohammed bin Salman thinks that building cities will happen in the same way as it does in video games. He thinks that with his nonsense he puts in the media that he will make history and make himself glorious,” said Walid al-Hathloul, the brother of jailed women’s rights activist Loujain al-Hathloul.

“The only thing he has succeeded in is making everyone believe in the failure of the state.”

THE LINE should be the minimum of basic human dignity. No economy under an archaic & authoritarian regime is stable, ethical or worthy of investment.

I left behind my company in #SaudiArabia due to lack of safety, freedom & so much more; I highly advise investors to stay away. https://t.co/8cKKJzfalZ

Translation: The saw [nickname for bin Salman after the murder of journalist Jamal Khashoggi in the Saudi consulate in Turkey] is worried about the environment. He killed Abdul-Rahim al-Howeiti , jailed his family and terrorises his family and anyone who is against giving up their land. He is a prime example of someone who is a despot and a coward, he kills in a treacherous way. His title is the saw and yet he wants to build a city that protects the environment. You are the biggest polluter to the universe and earth.

Huwaiti is a member of the Howeitat tribe and has often spoken out against the Neom project, which has displaced her fellow tribesmen and women to make way for the megacity.

MEE reported in April that tribal activist Abdul-Rahim al-Howeiti had been shot dead shortly after making videos protesting against his eviction.

Around the same time of the launch of Neom’s first major construction project, the world-famous Dakar Rally was passing through the region in which the futuristic city will be built.

Today the #Dakar2021 rally loops around the site of #Neom, a high-tech city being built by forced eviction of local residents. Abdul Rahim al-Huwaiti was shot dead when he refused to give up his home.#DakarInSaudi #whatisTHELINE pic.twitter.com/7r17lzj5Ex

The annual rally is among several high-profile sporting events to have been hosted in Saudi Arabia in recent years since the launch of Vision 2030.

Human rights organisations have accused Riyadh of using the spectacles to “sportswash” its reputation.

Ahead of the Dakar Rally, several NGOs wrote to its participants and organisers to draw attention to concerns about women’s rights in the kingdom.

“It is important to note that while… women activists suffer in prison after advocating for their right to drive, 16 women drivers will be participating in the 2021 Dakar Rally, unrestrained,” the groups, including ALQST and the Gulf Centre for Human Rights, said in an open letter.

Loujain al-Hathloul, Samar Badawi, Nassima al-Sadah, Nouf Abdulaziz and Mayaa al-Zahrani are among the women's rights activists to be detained in the kingdom. Last month, Hathloul was sentenced to five years and eight months in prison under a Saudi law on combating and financing terrorism.