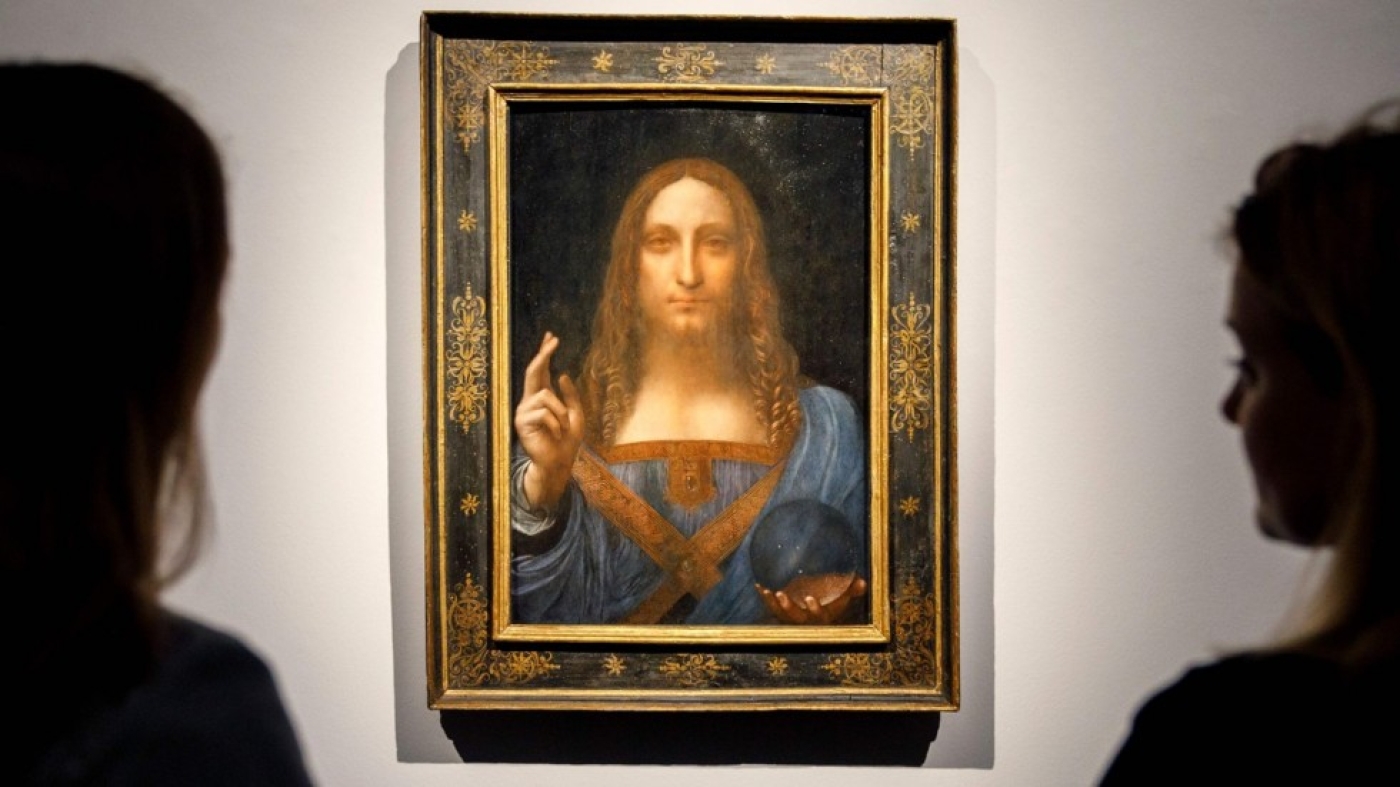 The Salvator Mundi, bought by a minor Saudi prince, is due to be displayed in Abu Dhabi (AFP)
By
MEE staff

On Wednesday, it was revealed that the buyer was a little-known Saudi prince with no history as an art collector and no publicly declared source of wealth.

Bader bin Abdullah bin Mohammed bin Farhan al-Saud, who is close to the crown prince, was identified by the New York Times as the new owner of the artwork.

The purchase comes at a time when the Saudi government, under the instruction of bin Salman, was rounding up dozens of billionaire princes and businessmen in what it said was a crackdown on corruption and excess.

A source familiar with the art world in the Middle East told the Journal that Bader is a “proxy” for bin Salman.

Sources from the US intelligence community said bin Salman is the “ultimate customer” although Bader is the official buyer, according to the Journal.

On Friday, Saudi's embassy in the US released a short statement claiming that Prince Badr Al-Saud bought the painting as an "intermediate purchaser" for the Abu Dhabi Department of Culture and Tourism.

The Times said documents provided by a Saudi source showed Bader was not presented as a bidder until the day before the 15 November sale in New York. The auction house Christie's scrambled to establish his identity and wealth.

Bader reportedly told Christie's his fortune was made in "real estate," and submitted a $100m deposit to qualify for the auction and as a starting bid.

According to the Times, Bader comes from a minor branch of the Saudi royal family, the Farhan, which does not trace its lineage to the founder of the modern kingdom, Abdulaziz ibn Saud.

Bader is, however, a contemporary and apparently close friend of bin Salman.

Both attended Riyadh's King Saud University around the same time, if not together, the Times said, and Bader was appointed as chairman of the Saudi Research and Marketing Group soon after bin Salman's father became king. The group has been in the hands of the Salmans for 30 years, the newspaper reported.

The newly opened branch of the Louvre in Abu Dhabi, in the UAE, tweeted on Wednesday that the Salvator Mundi "is coming to Louvre Abu Dhabi”. The Saudi crown prince is a close ally of his counterpart in Abu Dhabi, Mohammed bin Zayed.

In July, King Salman also named Bader governor of a newly formed commission, led by bin Salman, to develop the province of al-Ola as a tourist destination. Last week, the Saudi news channel Al Arabiya reported bin Salman had posed for selfies there with locals and went "dune-bashing" in a buggy.

According to a biography on the website of Energy Holdings International, whose date of writing was not apparent, Bader “has also been active in real estate projects in Saudi Arabia, Dubai and the rest of the Middle East over five years,” including in partnership with “large reputed companies”.

Christie’s told the Times it did not comment on the identities of any buyers, and Bader did not respond to request for comment.

According to the Times, Bader was one of at least four anonymous bidders competing by telephone through representatives in the auction room.

Bidding opened at $100m and began jumping by increments of up to $10m. When the price reached an already world-record $225m, Bader bid in $5m steps to reach $260m in less than two minutes of the auction beginning.

By that point, bidders were whittled down to two. When bidding reached $330m, Bader offered $350m. When that was matched, he jumped to $400m and won. The auction took 19 minutes.

A contract was drawn up specifying six monthly instalments. Five are for $58,385,416.67. The final price of $450m includes fees for the auction.

But the prize will raise concerns about the extravagance of the crown prince, and those of his associates, as he publicly calls for an end to excess in Saudi society.

Less than two weeks before the auction, on 4 November, bin Salman ordered the crackdown on more than 200 of the richest Saudi princes, businessmen and government officials. Many were beaten, and only released from the gilded cage of Riyadh's Ritz-Carlton hotel after agreeing to hand over assets worth billions of dollars.

The Da Vinci's sale to the Saudi royal family also risks offending the deeply conservative nation for its depiction of Jesus, a prophet in Islam. Many clerics in Saudi Arabia consider the artistic depiction of any of the prophets to be a form of sacrilege.

“The image of the crown prince spending that much money to buy a painting when he’s supposed to be leading an anti-corruption drive is staggering,” Bruce Riedel, a former CIA officer, told the Journal.